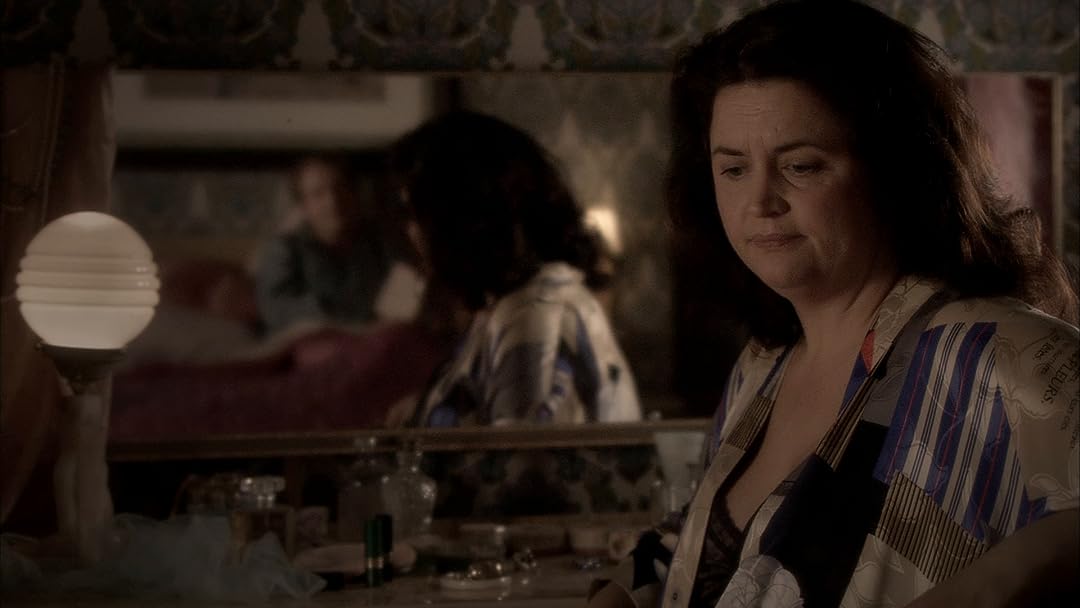 (188)
6.91 h 25 min201116+
Ruth Jones takes on the role of the larger-than-life Carry On actress Hattie Jacques, revealing how her home life was blown apart by a secret sexual liaison with her handsome young driver while she was married to Dad's Army star John Le Mesurier.

Beth RReviewed in the United States on September 27, 2021
2.0 out of 5 stars
So Disappointing
Verified purchase
The whole film was so contrived, and the plot promised early on to be mysterious and stimulating. Yikes, all they did was portray the star actress as a greedy, wanton, overweight housewife/actress. This film could have had it all. The Shakesperian aspect was overtly ignored. This one had such potential, a little sad to see that it fell a little short.
3 people found this helpful

K. BoullosaReviewed in the United States on January 13, 2013
4.0 out of 5 stars
Sad Yet Compelling Story
Verified purchase
This film is based, as it announces with the titles, on a true story. I was unaware of the real protagonists, probably due to the era, but they were alleged to be well-known stars of British television comedy in the 1960s. I had read about the film in a British publication and also noted that it starred Ruth Jones and Aidan Turner, whom I had only seen in "Being Human". I was curious to see how he would do in a straight dramatic role. I am glad I purchased the film, it is a small if sad gem, very well played by all hands. Warning to prudes: there is a fair amount of very graphic sex.

Hattie Jacques (pronounced "Jakes") is a successful television and stage comedienne. Plump, lively, funny, and forty-ish, she has achieved professional and financial success, and is ensconced in a comfortable marriage to John LeMesurier, a late middle-aged television actor with whom she has two adored sons - they live in a roomy townhouse in London and their lives seem to be enviably well settled and pleasant. Many friends, paying lives in the acting and theater world, stability, fun - Hattie is known as a terrific cook and hostess.

However, Hattie goes out one evening to appear at a charity event for childhood leukemia, and is driven home by an intense and handsome, working-class, 30-ish young man named John Schofield (Aidan Turner) who has lost his young son to the disease. Schofield is immediately drawn to the very vital and sympathetic Hattie, and chastises her when she makes a joke of her weight. When he delivers her back to her home in London, he impulsively kisses her goodnight on her doorstep. He disappears for awhile and Hattie assumes she has seen the last of him, but some time later he shows up on the set of the TV program she is filming. Following her into her dressing trailer, Schofield makes a more forceful sexual declaration, against which Hattie is utterly helpless. The two begin a heavily erotic affair and her comfortable, settled life begins to unravel, despite attempts on all sides to behave "decently".

Hattie and her husband have always had lodgers in their spare bedroom, and before Hattie's husband realizes that his wife and the young man who seems to have become her friend are lovers, he invites Schofield to take the bedroom when Schofield announces that his wife has thrown him out. However, LeMesurier's ignorance of the true situation between his wife and Schofield doesn't last long, and eventually all three protagonists are faced with a complex situation that they try to handle in surprising ways.

The film is well worth watching, particularly for the wonderful ensemble acting. Ruth Jones is superb as Hattie: she shows us, under an ironic, self-deprecating surface, just enough hidden longing (unfulfilled by her much-loved husband) to support her sudden defection, as well as her anguish about the impact of her affair on her children, and the effusive, larger than life personality that has entranced her public and her younger lover.

Robert Bathurst is exceptional as Hattie's long-suffering, peculiarly accommodating, decent husband - he is a well known character actor in Britain and his performance is as introverted and subtle as Ruth Jones's is extroverted and ironic.

Aidan Turner, his Irish accent replaced by a lower-class English one, did not disappoint as the object of Hattie's lust. While the script and Turner's portrayal do not soften the character's careless selfishness and blind possessiveness, Schofield's genuine love and attraction for his plump, older lover are also sincerely drawn. Turner's physical attractiveness is an obvious piece of casting, but Turner manages to avoid confusing Schofield's appeal with his own: Schofield's cockiness, sensuality, and immaturity seem part of his own persona, which is a credit to Turner, who could simply have leaned on his looks in the role and let it go at that.

In this day of film actresses who cannot be too thin or too toned, it is a bit of a shock to see a fat woman being pursued by a very desirable young man and engaged in heated love scenes with him. Perhaps the shock is salutary and we need to see more of such scenes. It probably happens more often than one might think - we need to remind ourselves, again, that this film is based on a true story. Love doesn't conform to fashions but follows its own rules, seems to be one of the messages of this absorbing, very well played set of character studies.

"Hattie" is a fine, if sad and unsettling film, and the excellent script and fine performances make it a worthwhile addition to any thoughtful collection. Note: it is Region 2, so you will need a region-free DVD player to watch it.

JReviewed in the United States on September 18, 2021
4.0 out of 5 stars
Good Movie - well acted
Verified purchase
I had not heard of Hattie Jacques before and was interested in her story. I was taken by the aggressive nature of John Schofield and alarmed by the passive almost stoic behavior displayed by Hattie's husband, John Le Mesurier. However, the movie ends while they are in Rome and Hattie's demise begins.
One person found this helpful

Stephen SmithReviewed in the United States on November 17, 2021
5.0 out of 5 stars
Time Well Spent
Verified purchase
I read through many of the reviews and decided to check this out for myself. I'm so very glad I did. The chemistry between Hattie and John was palpable, as was the love she and her husband shared with each other. Nothing felt forced or unnecessary. Kudos to all of the actors who helped bring this story to the screen. Love, sadness, hope... ah, such is life.
One person found this helpful

LoriReviewed in the United States on May 4, 2021
1.0 out of 5 stars
Very disappointed
Verified purchase
Does not play in the united states'.. so of no use..
One person found this helpful

drbremerReviewed in the United States on October 14, 2021
5.0 out of 5 stars
unexpectedly Awesome
Verified purchase
This is so worth the time of watching. Who would have thought romantic in many ways of the way of a woman's heart.
One person found this helpful

julesReviewed in the United States on October 7, 2021
1.0 out of 5 stars
yuck
Verified purchase
I like the fact one can fast forward a movie like this.
One person found this helpful

wrenReviewed in the United States on October 9, 2021
1.0 out of 5 stars
boring
Verified purchase
Don't get why this was even a movie
See all reviews
Back to top
Get to Know Us
Make Money with Us
Amazon Payment Products
Let Us Help You
EnglishChoose a language for shopping. United StatesChoose a country/region for shopping.
© 1996-2022, Amazon.com, Inc. or its affiliates