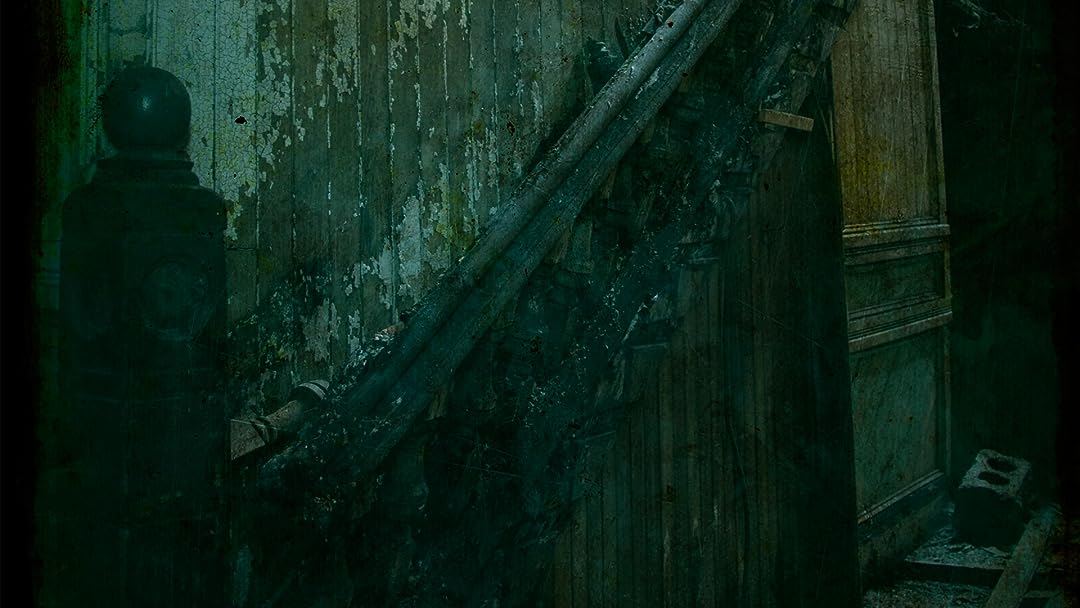 A Haunting on Potter Street

(231)
5.11 h 16 min2012X-Ray13+
For the first time in history, a documentary film crew has been granted permission to enter the massive and mysterious Potter street station, of Saginaw, Michigan. Watch the evidence unfold as investigators chronicle their journey through 30,000 square feet of suspense. Locked in over night, the investigators have 'til dawn to capture proof of the train station's notorious hauntings.

Laconic AntagonistReviewed in the United States on May 26, 2018
3.0 out of 5 stars
The film editor needs to stop with the sudden loud sounds as transitions or for effect.
Verified purchase
The sound effects... way over the top and unnecessary. The editor needs to stop trying to make people jump... just too much. I've watched three episodes of this series and there seems to be the same effects going on... the visual of something passing by quickly... seems to look very similar if not the same in the three videos I've seen now. There were some new stuff that was interesting, but with the over-the-top trying to scare you editing and other stuff this is starting to look too fake. Not to mention the staff dramatization of everything. The one guy that was on Ghost Hunters is now on this team, but at least he's not as whiny as he was on Ghost Hunters and the other kid does stuff to create drama. After all the negative said, I do kinda like the series in the idea, but the editor needs to cool it a bit. I may watch one more in the series, but if they continue this trend that will be the last one.
33 people found this helpful

Sherlocke The SheepadoodleReviewed in the United States on March 21, 2018
2.0 out of 5 stars
There's a kinda cool part where what looks to be a guy or ...
Verified purchase
SPOILER ALERT..
OMG! There’s something right behind you........ Oh No wait that was just the camera guy. Ok Im not saying there’s nothing there, My 2 Stars are for the way the Doc is DRAGGED OUT, the way “music” and sound effects are added to cover up a lot of “the nothing” thats happening and how slow the whole thing moves. There are several “People and Orbs” shown . There's a kinda cool part where what looks to be a guy or maybe one of the crew running by at about 34 mins but you definitely see something, there’s also a “Shadow Man” at around 50 mins, “some footsteps with movement” and a couple of “Cool Orbs moving doors” at about 56 mins. Personally I don’t understand all the “Disembodied Whistles”, “Disembodied Sounds and Talking” etc. that I never really heard anyway. At about 1 hr there’s a “Dark Figure” standing next to a colum. Amazingly at 1:05 we do get to see the “Woman in White” which is VERY COOL. But the scary music and effects they added in my opinion are total overkill, and most of the time are setting up for a BIG let down. The building is awesome but Im a fan of old buildings and architecture. The age, condition and the fact they’re in total darkness helps to add to the feeling that something’s about to happen but sadly it takes awhile.
25 people found this helpful

ARIMARKReviewed in the United States on June 25, 2018
4.0 out of 5 stars
Prozac #1
Verified purchase
As someone who investigates, I do like watching others findings but do understand that it's TV and has to be entertaining. So I get the dramatic music, understand that a lot happens when the camera's aren't rolling, etc. but I find it hard to believe that this much is collected in one night. I had to take a star away because of Brian. Little is ever captured with him but it seems that his dramatic outbursts are supposed to take the place of that. In this one it was something touching his face. Cobweb, most likely. And when he asks questions? If I were a ghost, I'd not answer with that answer-me-or-else tone that he has. I roll my eyes through his takes. So now I've seen all of Shippy's works to date. Interesting. He's a good investigator-I do like his approach and his team members, except the dramatic Brian...Sorry-I just don't find him believable at all...
10 people found this helpful

V. SuanReviewed in the United States on July 25, 2018
1.0 out of 5 stars
There's nothing here. Watch another movie.
Verified purchase
I was knitting while I was watching this. Otherwise, it's a total waste of time. SPOILER: Looks really staged, from the shadows, doors opening, shadows walking, face peeking, yadda yadda. It's an old structure and things fall from the ceiling, lamps sway, and when they ran out of battery, that's when they saw the "white lady". C'mon. Finally, since nothing was really happening, one guy felt a touch on the cheek and the other felt a touch on his shoulder. Go watch a better movie.
15 people found this helpful

MichaelReviewed in the United States on September 7, 2018
1.0 out of 5 stars
Lame
Verified purchase
Pretty lame actually. With the fairly decent number of stars I thought this was going to better. It is the same cliche ghost hunter stuff. Everything always happens just off screen unless it some they found in post production, the "disembodied" sounds are only as real as you want them to be. Like most of these shows, apparently buildings are only haunted at night. Not to mention that they just happened to be there on The night where everything happens. The movements of things in empty rooms look very mechanical. Especially one scene where there are "footsteps" going through. There is a bottle that moves that is almost laughable. The noises added in post production are only there to make it seem like something actually happened. And sorry, but the distant shadow men could be any member of the crew. It's funny how the spirits are invisible, orbs of light, whispers of fog, but then in the only places with backlighting they are suddenly human solid forms. Totally black though, because of the backlight. How convenient. This show is only for people who already believe everything in these shows is real. It will not convince a skeptic.
6 people found this helpful

AdriReviewed in the United States on July 19, 2019
1.0 out of 5 stars
Sorry to say but....
Verified purchase
This seems to be a lot of staged stuff and the appearance of Brian Harnois is evidence of such. He is a fraud who is willing to go to any length to stay in the spotlight and I believe that he has encouraged this group of "investigators" to stage a great deal of these alleged hauntings. I believe that maybe the owners and employees may be experiencing stuff, though I also believe that the show creators are staging quite a bit in order to piece together something entertaining and worth the 25.00 ticket price to see the screening of the shows. If you choose to watch these, know they are works of pure fiction, based on real history. For true paranormal investigating, stick to Ghosthunters. They do not do theatrics and go in to debunk as much as possible in the attempt to get real evidence.
3 people found this helpful

shogiReviewed in the United States on September 12, 2021
1.0 out of 5 stars
Annoying Sound Effects
Verified purchase
After watching this one I've come to appreciate how boring and tedious it must be to hunt spooks. One must lurk around for hours at night, taking to oneself. Then its all about sifting though hours of video, frame by frame, hoping to spot a furtive apparition. Then they have to manipulate hours of audio enough to discern breathless whispers on evp recordings. Meanwhile the ghosts are all about hanging around, just diddling with things, but none of them want to just come right out like Casper and interact. Instead they dart though doorways and peer around corners before they scurry off like rodents. The producers tried to jazz up this story with jarring sound effects and an abrupt ending, but that just made it even more boring.

Gary H NorwoodReviewed in the United States on August 17, 2018
2.0 out of 5 stars
A fictional movie of a pretend reality show, presented with no irony or story.
Verified purchase
As a very low budget "go cam" cable show, this is produced to the standard you would expect (single cam per scene, no lighting, video tinged green to hide its low quality, etc). It appears to be conceived as an extended episode of any of the fake supernatural "investigation" shows on TV - without the wacky hosts or personal side stories that make such shows bearable for 30 minutes. Its just as fake and pretend hype as such shows, so one wonders what is the point? The movie never answers that, as it has no plot and just randomly rolls credits after 90 minutes of heavily repetitive footage. To be clear - it has NO plot - not a bad plot, or pointless plot - NO plot, no story, and certainly fall sway short of being a presentation of documentary evidence (since its clearly faked, and even if you pretend its real, its still not evidence of anything supernatural, or even entertaining). People with cams go in a building and pretend they're talking to spirits and pretend white noise is the spirits talking back, and interject some staged footage of shadows moving across the background and doors opening without apparent cause. Skip anything this production company and these people are associated with.
2 people found this helpful
See all reviews
Back to top
Get to Know Us
Make Money with Us
Amazon Payment Products
Let Us Help You
EnglishChoose a language for shopping. United StatesChoose a country/region for shopping.
© 1996-2022, Amazon.com, Inc. or its affiliates