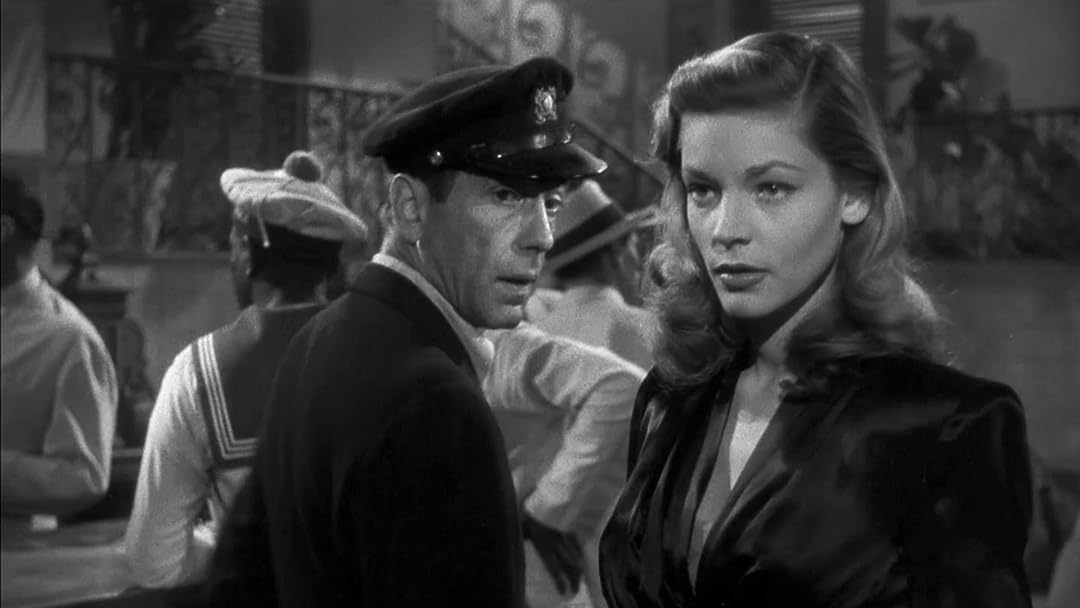 To Have and Have Not

Todd7Reviewed in the United States on April 10, 2018
5.0 out of 5 stars
Bogey and Bacall’s Opening Act
Verified purchase
To Have and Have Not (1944) is the first of four Bogey/Bacall collaborations, and it doesn’t disappoint. I’m amazed at the level of maturity and solid acting by a 19-year old Lauren Bacall. Some people have criticized her acting debut as stiff and novice-level; I beg to differ, because she’s a natural here. This film also reminds me of Casablanca in certain parts, with a piano player, tavern, and some gunshots. Humphrey Bogart is in fine form as usual in this film, with his patented fast-talking and smoking. The pacing is just right, and the plot is easy to follow. The blu ray is an excellent print for a film that’s over 70 years old. The special features are interesting as well. It’s very tough to choose the best Bogey/Bacall film out of the four (because they’re all so great), but I’d rank this one last, trailing The Big Sleep, Key Largo, and Dark Passage. Still, you can’t go wrong with Bogey and Bacall!
24 people found this helpful

D.B. SpaldingReviewed in the United States on December 18, 2017
5.0 out of 5 stars
Fantastic restoration and presentation of an undisputed classic. All you have to do is whistle. You know how to whistle, doncha?
Verified purchase
Beautifully restored from a nitrate fine-grain master positive (the negative and original soundtrack elements have long since been lost), this BD presentation of the first, and IMHO quintessential, Bogie & Bacall film stands out on a long-awaited HD release. I won't repeat the fine points of the blu-ray.com review of this release, just to say that it was worth every penny, and worth every day that I waited for a suitable home HD release of one of my favorite movies. (Just writing this makes me want to see it again, tonight. I think I will!)

John P. Jones IIIReviewed in the United States on November 26, 2019
3.0 out of 5 stars
Only a vague resemblance…
Verified purchase
…to Hemingway’s novel. At least the movie and the novel were both set on Caribbean Islands…though not the same one. The novel was set mainly in Cuba; the movie was entirely set in Martinique, which has a special spot in my heart. The decades are different. The novel was set in the ‘30’s; the movie in the ‘40’s. The novel has nothing to do with the conflict between the Vichy and Free French. In the movie, this conflict is a central theme. In many ways, including the many bar scenes and the piano player, the movie seemed to be a re-tread of “Casablanca.” The movie was made during the Second World War, and many changes were made for “political considerations.” In reading about the background on the movie, the direct hand of censorship was heavy. Hence the change of islands. Even the hint that a man and a woman might enjoy the pleasures of the flesh was absolutely verboten, to borrow a word from our one-time wartime adversaries. A kiss was as far as one could go. And not a “French” one, despite the locale. The Director, Howard Hawks even put a much more optimistic spin on the fate of Harry Morgan, the American boat captain. The movie was released in 1945.

Humphrey Bogart seems to have been stereotyped to play the role of the tough cynical American abroad, only trying to make a buck, and absolutely will not get involved in “local” conflicts, but ultimately will come through as the idealistic do-gooder, fighting the “good fight.” Often a woman is involved. In “African Queen,” he is in East Africa, during World War I, and Katherine Hepburn convinces him to fight the Germans. In “Casablanca,” he is Rick Blane, running “Rick’s Café, and the film features Ingrid Bergman. Rick eventually joins the cause and helps the Free French. And in “To Have and Have Not,” he joins the Free French out of economic necessity, and yes, a bit of idealism. Lauren Bacall plays Marie “Slim” Browning, a 22-year old American who has stumbled onto the scene, also apparently out of economic necessity.

Even with the heavy hand of censorship, she slips through the fingers as most provocative. Comme DAB, the eyes have it. What a wonderful line: “I’m hard to get, Steve. All you have to do is ask me.” She clearly marks her territory vis-à-vis Dolores Moran, the wife of the chief French resistance fighter. Bogart at one point asks her to walk around him. The point being that he has no strings attached to him. Bacall replies: “YET.”

And real life would imitate art. Bogart and Bacall would marry not long after the release of the film. They would remain married until his death in 1957. (She would subsequently marry Jason Robards, staying married to him during the ‘60’s).

The chemistry between Bogart and Bacall is most palatable and enjoyable to watch. Much of the rest is a so-so fantasy and re-tread of “Casablanca.” Hopefully Ernest got a cut of the royalties, for the use of his title, without the book’s content. 3-stars.

Freewheelin' FranReviewed in the United States on February 28, 2017
5.0 out of 5 stars
"SAY, WAS YOU EVER BIT BY A...
Verified purchase
dead bee?" Well there are no dead "B's" in this movie, just two very live ones as Bogey and Bacall turn in another magnificent performance. 'Casablanca' will always be my alltime favorite Bogart movie, but this one is very close. Walter Brennan puts on one of his best performances as 'Eddie', Bogart's well-meaning alcoholic friend and partner, with his 'dead bee' line and his fierce determination to take care of his pal. Hoagie Carmichael tickling the ivories is fun too. Throw in a great supporting cast up and down the line and you have another timeless wonder. Two thumbs up!
16 people found this helpful

OneMinuteReviewReviewed in the United States on March 28, 2018
5.0 out of 5 stars
One of the greats--never gets old!
Verified purchase
One of the greats--never gets old! Comparing this with more current feeble noir attempts can only leave you amazed at how good they got it back in the "old" days and wonder what happened to current filmmaking. A real story with real acting--yes even by relative beginners like Bacall--and yes real directing. Many current hot shots could learn plenty from this classic. Watch it again--or better yet just buy it as you'll def want to watch it again.
9 people found this helpful

BrickHeadReviewed in the United States on January 24, 2021
5.0 out of 5 stars
I've seen it many times
Verified purchase
I don't tire of this one, no matter how many times I see it. It has virtually nothing to do with Hemingway's book and, yes, it's an attempt to build on Casablanca, but the movie stands on its own 80 years later. The cast is terrific, of course the leads, but also the character actors in minor roles, Marcel Dalio, and Dolores Moran are memorable. Hoagy Carmichael's music is terrific. So why aren't you watching it already?
3 people found this helpful

Jack E. LevicReviewed in the United States on July 8, 2013
4.0 out of 5 stars
WHEN BOGART MET BACALL
Verified purchase
There is one main reason to see to see TO HAVE AND HAVE NOT. That reason is Lauren Bacall in her first film role. Sultry and sexy do not even begin to describe a 19-year-old Bacall. It's that twist of the head and that enticing look in her eyes that will make any man melt. Small wonder she and Humphrey Bogart began a passionate love affair that lasted until his death. It's clear in this film that Bogart and Bacall have a chemistry that has never been seen before or since. Despite Bogart being more than twice Bacall's age, their on-screen romance is believable. Bogart glows and looks younger than his years while Bacall has a maturity that is rare in woman years old. It's hard to believe she was a teenager when this film was made.

I recently attended a screening of the CASABLANCA in a restored classic Los Angeles theater. The moderator made several comparisons of CASABLANCA to TO HAVE AND HAVE NOT. I realized I hadn't seen TO HAVE AND HAVE NOT, so now was the time. In my opinion, the two films only have a few things in common. Both were from Warner Brothers Studios and both star Humphrey Bogart. In both films, Bogart is an ex-pat American living in an overseas French territory during WWII. The territories are administered by the pro-Nazi French Vichy government and here is the main plot in both films. This time, Bogart owns a deep sea fishing business on the island of Martinique in the Caribbean. The story is an adaptation of an Ernest Hemingway novel. Add in director Howard Hawks and script doctor William Faulkner and we should have quite a movie. Unfortunately, it does not deliver as one would think. The plot is slow moving. Bogart is again urged to help pro-nationalist French freedom fighters. As with CASABLANCA, the holes in this plot are pretty big. It's not Bogart's best film nor is it Hawks's best directing job. It's a sizzling Bacall that redeems this film on all levels. She lights up the screen in every scene. Her screen magic was noticed quickly and her part was expanded as the film was being made.

Bacall says one of the classic lines in film history when she tells Bogart, "If you want me just whistle. You know how to whistle don't you? Just put your lips together and blow." Her screen legend was sealed with that one line. The sultry look and the sexy voice is overwhelming. Watch the little dance she does at the end of the film as she leaves the bar. This is HER movie on all levels.

TO HAVE AND HAVE NOT is not the classic it could be. It could be easily forgotten if it were not for Lauren Bacall. The film has to be seen because of her.
12 people found this helpful

Delta D.Reviewed in the United States on April 25, 2021
4.0 out of 5 stars
Run of the mill narrative, but great seacape shots and Bogie and Bacall splendid
Verified purchase
I've not read the source novel in a very long time, but my recollection is that much has been changed for the film. Bogie inevitably brings Casablanca to mind: once again he is an initially neutral and indifferent American who ends up taking great risk in opposing the Nazis.

In truth, I'd be inclined to go for 3*, but the seascape cinematography is most capitivating (with or without the marlins), Bogie's on his usual impressive form and Bacall delivers an astonishingly mature performance.

I shall revisit the novel.
See all reviews
Back to top
Get to Know Us
Make Money with Us
Amazon Payment Products
Let Us Help You
EnglishChoose a language for shopping. United StatesChoose a country/region for shopping.
© 1996-2021, Amazon.com, Inc. or its affiliates