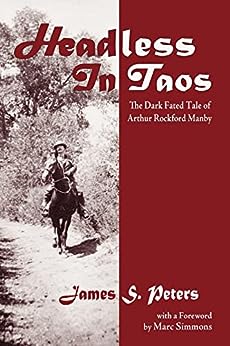 by Stephen Peters, James (Author) Format: Kindle Edition
See all formats and editions
Sorry, there was a problem loading this page. Try again.

Following the discovery of the decapitated corpse of Arthur Rochford Manby in his nineteen-room mansion in Taos, New Mexico, there quickly arose two schools of thought as to the event. One sect accepted that he was gruesomely murdered, while the second held to the belief that he had staged his death and left behind the cadaver of a stranger. The case was a bizarre enigma wrapped in riddles, confusion, betrayal and greed. Finally for posterity, and as relief to the guilty, it was labeled an unsolved crime. Today it is referred to as the "Manby Mystery of Taos." This book contains very little mystery. Rather, it is the tragic account of Manby and his 35-year career in manipulation, extortion, high-grading and murder. Arriving in New Mexico from England in 1883, the 24-year-old Manby began his personal odyssey for El Dorado: the dream of building a vast empire in the Southwest. He finally does so in 1913 when becoming the owner of the 61,000 acre Martinez Grant of Taos. But after three years it slips from his grasp and he is left nearly penniless. In his last years he gradually decays mentality and emotionally. Looked upon as an eccentric, no one realizes how ill he has become. Finally having a falling out with a quartet of compatriots, in July, 1929, he is murdered and decapitated.

Read more
Previous page
Next page
Due to its large file size, this book may take longer to download
Create your FREE Amazon Business account to save up to 10% with Business-only prices and free shipping. Register today

James S. Peters was born in Wyandotte, Michigan in 1930. In the mid-1940s his family moved to California where at sixteen he enlisted in the Army Air Corps and served three years as a medic. Later he spent ten years in the navy as a photographer and in 1964 he alighted in Taos, New Mexico and developed an avid interest in Southwestern American history. After living in Santa Fe and Albuquerque, he continued researching and writing articles on the frontier West. After retiring, he pursued his interests in writing and painting. His previous book, Robert Clay Allison, was also published by Sunstone Press. --This text refers to an out of print or unavailable edition of this title.

E H
1.0 out of 5 stars Awful!
Reviewed in the United States on July 18, 2017
Verified Purchase
This book is awful! What begins as a pretty interesting historical description of Arthur Manby devolves around page 95 into a soft porn/romance book with fabricated dialog. Almost as if two different authors wrote the book, the first half written by a scholar, the second half written by a romance novelist. A lot of the history can be found in Frank Water's book, "To Possess the Land" which the author listed as a source.

Didn't know whether to finish this book or throw it at the wall. Skip this book for sure.
Read more
Helpful
Report abuse