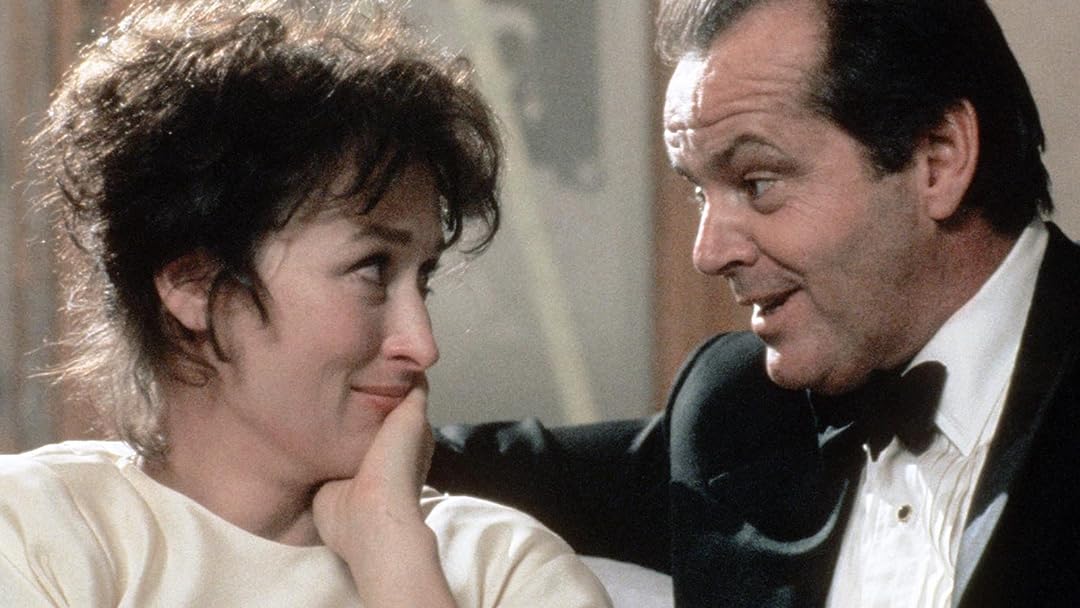 (1,337)
6.11 h 49 min1986X-RayR
Meryl Streep and Jack Nicholson are wonderful together in this lighthearted look at modern romance headed for failure, based on Nora Ephron's best-selling novel. She's a magazine writer who gives up her career for love and family. He's a playboy newspaper columnist who can't quite give up his old tricks. And if that combination doesn't give a relationship Heartburn, nothing will!

Sunny's MomReviewed in the United States on July 3, 2019
5.0 out of 5 stars
Retreat back to the Eighties
Verified purchase
I'm sorry. I'm done with today's weird Apple, Starbucks, Goofle/big brother, politically correct madness culture. I've retreated back to the movies of my early adult years, when things made sense, or at least, made sense to me.
I've always loved this movie, with its icons from my generation...Streep, Nicholson, Simon( for soundtrack). Remember when people dressed for dinner, made silly jokes without the culture police menacing at your shoulder, and dialogue was based on intellect, not vulgarity? So, that's where you'll find me, until this insanity blows over.
102 people found this helpful

Ralph CinqueReviewed in the United States on March 2, 2020
1.0 out of 5 stars
Not even NIcholson and Streep could save this horrible writing
Verified purchase
This is some of the worst writing I've seen. It's bad enough that the premise about a marriage that goes wrong over an affair is totally worn out, but the elements that build the story are ridiculous, starting with a wedding that gets stalled because the bride gets cold feet, and all these people, one after another, go into her room to convince her to come out, and meanwhile, they try to create humor over the fact that the wedding is being delayed many hours, and none of it was funny. Why does she get cold feet? Because her imminent husband is famous for being a philanderer. And what happens after the wedding? He philanders. But not immediately. First, you have to sit through all this domestic stuff, such as them having a home built in which the builder forgets to include a back door. I think that was supposed to be funny too. Then, when it gets to her finding out about the affair, it's just an abrupt left turn in the story. There was no context to it. It was more like an inevitability.

Then, it goes to how she handles it, and not well. When she tells her father that her husband Mark is having an affair with this Thelma Something, the father's response is, "Do I know her?" Then he says that she might as well give her child to them, and also her second child after it's born. When she tells a close friend that the reason she's upset is because her mother died (which was true, but it happened a while ago) the friend says that it's not the so bad really because losing your mother can be liberating. How do you come up with characters like that?

The writing, the dialogue, the endless effort to show you how crowded New York City is, everything about this movie stinks. That includes the title: Heartburn. What a horrible script. It doesn't get much worse than this.

Shulamit WidawskyReviewed in the United States on March 18, 2020
3.0 out of 5 stars
The movie has not aged well. An extra star for being kind of a classic?
Verified purchase
Generally, I give 2 stars for shows I could watch, but didn't like, 1 star if I couldn't keep watching it, or hated.

I'm giving this three stars even though it mostly is a 2 star movie, because it is kind of a classic. The movie has not aged well, the stereotypes are painful and racist. Perhaps the movie holds together better if you read the book, but that's not something a movie should count on.

All that said, it does reveal a particular cultural time and space, warts and all. If you are interested in an 80's era movie, but looking to see adults instead of teens, you might find this interesting.

But the title of the movie--Heartburn--says it all. Watching the movie isn't edifying, barely interesting, just heartburn of a movie.

Interesting note, the toddler is played by Meryl Streep's real daughter (for some reason the credits did not use her real name).
13 people found this helpful

doogiesmomReviewed in the United States on May 1, 2021
1.0 out of 5 stars
Movies like this are clearly why I never wanted to marry...
Verified purchase
Never saw this when it came out. I was quite young at the time when it did and I would not have been interested. Especially in Nicholson. My God who ever thought this man was attractive et. Yuk. In this day and age it is painful to watch. That a capable, smart woman would think it was worth giving up her career, home et to cater to a man. Literally and figuratively (she cooks a lot in the film). But it is telling of it's time. It actually makes me angry to see the stereotypes perpetuated about women in this film. Catherine O'Hara's gossiping viper who lives off other's misery is particularity painful to watch. What a waste of a great actress. Lastly again we see the big age difference. Streep was 13 years younger than Nicholson. This has to stop being the norm in films. French films don't disregard older women - or at least realistic age appropriate women. Why is it American films constantly pair much younger women with dried up men? Wishful thinking on the part of movie execs??
4 people found this helpful

AmazonCustomer100Reviewed in the United States on November 29, 2020
1.0 out of 5 stars
Disappointing
Verified purchase
I've never seen Meryl Streep in a role where I took a dislike to her character. She simply did not seem like this role was comfortable to her. All these great actors, and I didn't like any of the characters. Great director, great actors, but nothing sparked. I don't think I've ever been blown away by Nora Ephron as a writer, and perhaps a movie that has her as a writer and then as the main character ( my feeling was that this was supposed to be, at least in part, semi-autobiographical), is perhaps where the disconnect was for me. I can almost see Meryl getting micromanaged in this role, because she just doesn't seem up to her usual self. Perhaps it was meant to be a tongue-in-cheek sketch and not filled with fully developed characters...
9 people found this helpful

Khristine JacksonReviewed in the United States on August 23, 2020
4.0 out of 5 stars
Mike NIchols ... what a director
Verified purchase
First of all ... I love this movie.. I have seen it maybe 4 times over 20 years.. Let's be honest as a woman who has been in love twice in her life. Especially one who has been cheated on ... doesn't this make you angry? I mean no woman likes to discover that her spouse/BF is running around on her..? In the movie when he brings up "missing socks"..?
H-E-L-L-O ...... that's the red flag .... Meryl Streep is a great actress and she knows it...! Jack Nicholson and her I believe starred in another movie before ..? To supporting players did a fantastic job and the late Steven Hill who plays her dad ..is just being honest "If you want monogamy ..marry a SWAN"..! Not all men cheat and the ones who have a track record for it...... ..... ..... RUN ! All this time the little girl in the movie ..I never knew was her daughter..who has grown up an became an actress herself. What other people who wrote reviews don't understand is that every ..GENERATION lives differently their own. The 1980's was possible a great time for Men and women who were in their late 20's-30's.. Mike Nichols was one of the greatest directors and Carly Simon's famous song "Coming around again" fits the movie just well. By the way did you check out the fashion's of the era... Women really knew how to dress ...and they wore make up,stockings and styled their hair. Not like this generation born from the 1990's-2000's.. who wear nothing but pants and jeans.. The apartment building were her dad lives at in NYC...could be the "Dakota" were the late John Lennon could have lived with Yoko Ono his widow were he was shot and murdered by a lunatic.. This movie will always be a favorite of mine...
3 people found this helpful

Klh23Reviewed in the United States on August 9, 2021
4.0 out of 5 stars
Not entirely a chick flick when Nicholson's unrehearsed rawness wouldn't allow it.....
Verified purchase
Nothing earth shattering about this movie but it's got great actors with clever (if not too clever at times) lines that convert drama into comedy or visa versa over a storyline that isn't a lot of laughs, especially not when Streep is playing the role unfortunately so well that we feel her pain at being deceived. The loving devoted wife in love with her husband and just about conquering the distrust she'd built up in the institution itself, for good reason. Her low expectations it seems are not necessarily premature nor simply paranoia. Except for the fact that she's a gourmet cook, these roles are not locked in by gender. Thus both characters relatable by an audience I would think. I like the ending which some might celebrate. The movie really dictates for whom we root. Always enjoyable to watch great talent like the 5 major roles in this film, and it's not time wasted. Slow paced but the brilliance of the players makes it a much better movie than the what might be missing from its parts.

VelvetReviewed in the United States on September 24, 2020
3.0 out of 5 stars
Two and a half, really....
Verified purchase
I give it 2 1/2 stars. It is so predictable in its story line: Man flirts up woman, woman falls for it, they fall in love, get married, then next thing we see is a baby, and next thing we see is man having a fling with a socialite who lives off of flings, even though she might also (have been??) married herself.
Well, all ends up in the last "tableau" where he gets the pie in his face treatment, and game over.
I can buy Nicholson in the role of womanizer, that part is easy. But, to imagine Streep in the role of a woman who goes off on a wild affair, just like that and right out of a friend's wedding, that's too much of a stretch for me. She also dresses the goodie-two-shoes part here, more like a dapper house wife, even before she is one. So I'll categorize it into the "no need to think too hard over this one" genre. That is about it. Meeeehhhhh......
2 people found this helpful
See all reviews
Back to top
Get to Know Us
Make Money with Us
Amazon Payment Products
Let Us Help You
EnglishChoose a language for shopping. United StatesChoose a country/region for shopping.
© 1996-2022, Amazon.com, Inc. or its affiliates