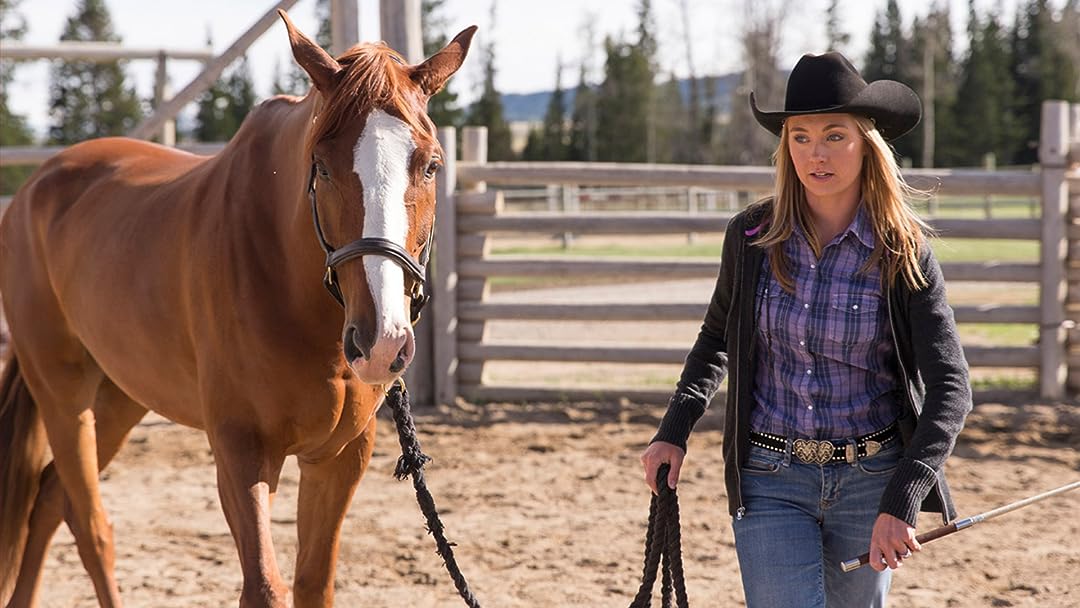 (1,592)
8.42008X-RayTV-Y
Heartland is a ranch like no other - it is a horse ranch with a special mission to treat troubled or neglected horses and find them new homes.

Ronald G. Helfrich JnrReviewed in the United States on November 14, 2017
1.0 out of 5 stars
Avoid the EOne/GMC/UP Censored Set Unless You Like Your Heartland Censored...
Verified purchase
This set from EOne and GMC/Up is the bastard stepchild of art being trumped by Mr. Potter commerce. To assuage the head in the sand minds of tender little fundamentalists EOne offers a censored version of Heartland in this season one set. If I had known this--I see no indication that it is censored on the DVD case though I have to admit my 60 plus year old eyes can't read text that small--I would not have purchased it. EOne and anyone else who approved this censored version of Heartland should be ashamed of themselves though I doubt they will. I suspect in their petty minds art always should be trumped trumped by commerce. If EOne had an ounce of moral fibre they would immediately refund those of us who bought this snake oil season set and any other censored season sets we bought. Zero stars for this set.

As for the show itself, the first five episodes are really good. The next five are good. 4 stars for the show.

By the way EOne and their fundamentalist partners have mixed and matched the Canadian seasons of Heartland and produced a bastardised set in the process. Season One of the EOne/GMC/Up set contains all of season one and part of season two. The moral of this story? Avoid the EOne/GMC/UP sets like the plague unless words like "arse" traumatise you so much that they will send you into fifty years of expensive therapy.

Addendum: I found a note at the bottom on the back of the DVD case which says "Please note package contains episodes as seen on GMCTV. This is a poor caveat since some of us who buy Heartland have never heard of GMCTV and do not know that it engages in censorship. This would be a better caveat: Please note that some episodes are edited for content.

LisaReviewed in the United States on September 26, 2016
5.0 out of 5 stars
A great family show.
Verified purchase
This series starts off very seriously and continues with great family fun, serious drama, and horses. What is better than that? When I told my husband about the show he was skeptical, but the first 15 minutes got him hooked and we now make a point of watching every episode that we can. Thankfully we live near the Canadian border and can get the current seasons as they are aired. I wish everyone could see this show. It is entertaining and has good family values. I often tell people that it is a modern day Walton's or Little House on the Prairie.
17 people found this helpful

the most interesting preacher in the worldReviewed in the United States on April 28, 2021
5.0 out of 5 stars
The Best TV Series Available
Verified purchase
I bought Heartland Seasons 1-12 for myself. The plots, the people and the promises are unimaginably good! My wife and I are going through the 12 seasons for the 3rd time! Every family needs a Jack Bartlett in their lives to stabilize and encourage each family member. Heartland is so good that I bought a copy of Season One for a widow when her Cowboy husband recently passed away. I think it is the best TV Series available! My only regret is that they do not have Seasons 13 and 14 on DVD or BluRay for the United States, yet. Perhaps they will produce one for us in America!
One person found this helpful

Martin J.Reviewed in the United States on April 25, 2017
5.0 out of 5 stars
Highly Recommended!
Verified purchase
This is an excellent show for the whole family. If you are the kind of person who watches a show with the kids and always worries that sooner or later you will encounter an episode with some questionable content you do not have to worry about that with this show. I've seen 8 seasons of it and have always been pleasantly surprised at how the writers and producers have chosen to maintain a consistent high bar for the characters. Also the cinematography is absolutely beautiful. After the first couple episodes the show just gets better and better.
10 people found this helpful

snwlprdReviewed in the United States on July 28, 2015
4.0 out of 5 stars
Excellent family show, messed up dvd packaging!
Verified purchase
Excellent show but careful on ordering. This "season one" is actually season 1 and part of 2 based on shows website list of season episodes. Others have comment but season 1 was only 13 shows and this dvd gives u 22 shows (9 of beginning season 2) Buy this and same model labelled season two and three to " even out" true seasons. each has 22 shows, so by end of " season three" dvd set you will actually gave all of seasons 1, 2, 3, & 4!!!! They stopped putting 22 episodes in each dvd after the season 3 one.of this type. However then the big Boo Boo happened. If you order season 4 "as seen on UP" you actually are getting season 5----if you order season 5 UP, you are getting season 6. ANO
THER boo boo, season 6 is really season 6!!!!!
3 people found this helpful

RachelReviewed in the United States on March 7, 2019
5.0 out of 5 stars
Great show, great content, reliable download.
Verified purchase
This show is great and is relaxing to watch. Owning Season 1 is a good idea so that you can watch it in the future with more friends and family (get them addicted, lol). I love the show and it only gets better and better as the Seasons go along. Although you could watch it on Netflix with your subscription, sometimes its better to have an actual download (like this) instead of streaming each episode over Wi-Fi which can glitch or not stream properly. After you download this over Wi-Fi, you won't need Wi-Fi to watch it. Just make sure you have enough space on your device before downloading. It's a great show to get into with your friends or family.
2 people found this helpful

chenReviewed in the United States on February 16, 2014
5.0 out of 5 stars
above and beyondת,love this television series!!!!
Verified purchase
this is never happen to me, i just fall in love with heartland tv show. Heartland is a Canadian family drama television series which debuted on CBC on October 14, 2007. The series is loosely based on the Heartland books by Lauren Brooke. The TV series changes the setting from Virginia, USA (in the original novels) to the Alberta Rockies in Alberta, Canada.

Heartland follows sisters Amy and Lou Fleming and their grandfather Jack Bartlett through the highs and lows of life on a horse ranch in cattle country. The story details how even though Amy and Lou's mother was killed in a car accident, they continue to keep their mother's dream alive by healing abused and neglected horses.
in the first season Amy Fleming was only 15 when her mother died from her injuries in a car accident in which she was involved.Amy inherited her mother's gift of horse curing. When Amy returned home she decided to carry on her mother's work healing abused or damaged horses including the horse that her mother gave her life to save named Spartan. Amy also had to deal with the return of her older sister Lou who had been living in New York City. Before Amy's mother died, she agreed to allow Ty Borden to live at Heartland as part of his probation and when he arrived, Amy's grandfather went with his daughters wishes. Ty grows close to Amy and becomes best friends with her, later falling in love but they soon have a heartbreaking break up. Though later on, while working with a pair of horses, they manage to make amends.
Heartland will Drifting you off your feet if u only give it a chance.i'm glad that the dvd arrived in great shape.
4 people found this helpful

RockHawaiiReviewed in the United States on December 8, 2016
5.0 out of 5 stars
An excellent show!
Verified purchase
Here's a quote I totally agree with: Having begun its 10th season this year, it's a flagrant and unapologetic tugger of heartstrings. They don't call it Heartland for nothing." And throw in some awesome scenery and plots that twist and turn and who am I to argue with a show that is Canada's longest running!
10 people found this helpful
See all reviews
Back to top
Get to Know Us
Make Money with Us
Amazon Payment Products
Let Us Help You
EnglishChoose a language for shopping. United StatesChoose a country/region for shopping.
© 1996-2022, Amazon.com, Inc. or its affiliates