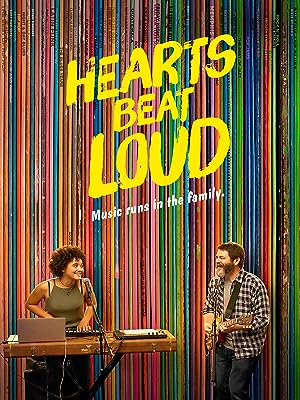 (554)
6.91 h 37 min201813+
In Red Hook, Brooklyn, a father and daughter become an unlikely song writing duo during the summer before the girl leaves for college.

C. FrancoReviewed in the United States on February 14, 2020
5.0 out of 5 stars
Yes, there's a LGBTQ love story in this movie, in case you didn't know.
Verified purchase
Kiersey Clemons and Sasha Lane are both queer actresses, so it wasn't a surprise to me, but just in case you didn't know and actually care about that sort of thing. Although the primary storyline is a father and daughter making music together, the movie is ultimately about loving relationships and all of the beautiful forms they take. And the songs by Keegan DeWitt, and performed by Nick Offerman and Clemons, are so catchy, they get stuck in my head all the time. Also, Sasha Lane just being Sasha Lane, because she's so adorable and so raw at the same time. It's just a cute movie with a lot of great actors and great music performances. Worth a watch.

Edit: wow, Amazon. I see my review is hidden by “sensitivity filter.” So apparently it’s ok to bash a gay love story, but not comment on the beauty of one???

RMurray847Reviewed in the United States on December 3, 2020
4.0 out of 5 stars
3.5 stars. Light as a feather charmer, lacking real oomph.
Verified purchase
Frank Fisher runs an honest-to-goodness record store in relatively modern day Brooklyn, and it's about to go under. He's worried, mostly because his daughter Sam is about to go to UCLA for med school, and helping her pay for that is a top priority. He also has a mother with dementia who keeps wandering off and getting arrested. How will all this be resolved?

Well, this movie is really not all that interested in these things. Frank (Nick Offerman) also PLAYS music, and was once in a band with Sam's (Kiersey Clemons) mother. A mother killed a lot of years ago in a cycling accident. Sam also plays some music, and although she's very studious and very into being a doctor, she still indulges her father with occasional "jam sessions." One night, she brings a song she's started writing to one of these sessions. This results in the song "Hearts Beat Loud" to be recorded and Frank uploads it to Spotify, where is makes a modest splash. He's excited about forming a real band with his daughter and seeing what they can make of a musical partnership. She's interested in being a doctor and in spending time with her new girlfriend Rose (Sasha Lane). THIS conflict is the real meat of the story, and even that is truly overcome by the music.

Clemons and Offerman (who knew!) actually perform in this film, and the music they "create" (the songs were written by others) and play together is what makes the movie a charmer. First of all, Offerman is totally convincing as a slightly grump guy who loves music and loves his daughter, and when he gets to combine the two, his sheer delight is transporting. Offerman practically glows, and having enjoyed his flat, grumpy persona for so many years, seeing him expand on that is a joy. This movie is his show, really. Clemons is refreshingly unaffected in her performance, and it's great to see a father/daughter relationship that shows the pair fighting (at times) but not once feeling that the underlying love and commitment is at risk. But while Clemons is quite charming, in my opinion as a middle aged white male, Offerman's performance is the revelation. Others will feel differently...but I think either way would make the film fun. Just watching these two play together and create songs together is really quite lovely. The rest of the "drama" of the film is quite secondary, although the plot points DO need be resolved, and some are resolved more convincingly than others.

The stuff with Offerman's mom (Blythe Danner) really barely registers, except that we see it as yet another pressure on HIM. His relationship with his land lady (Toni Collette, always a welcome presence) waffles between romance and friendship, and will sweet, is not gripping. Offerman does have some nice scenes with his local bartender (Ted Danson...who enlivens almost every effort he's in these days). On the other side, Sam's relationship with Rose isn't terribly gripping either. They are facing the idea that Sam's move to the other coast will doom their relationship, but we have virtually no emotional investment in them as a couple.

SO, in the end, the joys of this movie are simple and light. Watching two charming performers enjoying playing music together and enjoying the TIME spent making music together. It's a delightful and heartening father/daughter relationship. I suppose if there are any revelations beyond "music can be transporting" would be the notion that "fathers and daughters can love each other with ease, despite any dramas that arise." It's nice to see played out and makes the whole film seem cozy. And I really, really enjoyed this lived-in performance from Offerman.

The "plot" and the resolutions of the various conflicts are secondary and never feel terribly important. Some are resolved in a satisfactory way and others are virtually forgotten. It matters because it makes this movie feel somewhat incomplete as a story. But I still recommend going on this journey with these two characters.

Nhat NguyenReviewed in the United States on September 30, 2018
4.0 out of 5 stars
Heartwarming movie...
Verified purchase
I got a pre-order offer from Amazon to buy this movie for 99 cents. I like Nick Offerman, so I figured it'd be worth it. I think it said something like if you like movies about music like Once and Sing Street... While It didn't quite hit the mark that those two did, It moved at a nice pace and the music was definitely the highlight. If I had to nitpick, I would say that I would have rather seen more of the creative musical process between the father and daughter or background on the wife rather than the girl's romance being shoehorned in. It just seemed like they did a bit too much there. I do agree with the one reviewer that there should have been some sort of meaningful goodbye scene since that's what it was all abouit. To the reviewer that titled their review "Sexual Themes," though.. there was once intimate scene of two girls kissing on a bed, fully clothed for a few seconds and then they talk and it ends. That's it. No nudiy, no simulated sex. C'mon, people.
5 people found this helpful

FJGarnerReviewed in the United States on September 16, 2018
2.0 out of 5 stars
Talented Cast but the subplots & ending could have been better
Verified purchase
I really wanted to love this movie. The cast are talented. The musical preformances are a highlight of the film. And the main story plot between the father & daughter was compelling.

It was the subplots and the ending that fell flat for me. The daughter's romantic relationship didn't add anything to plot and the extended family dynamics could have been better explored & fleshed out to add more depth to the family's struggles & interactions (the paternal grandmother, the daughter's relationships with the maternal side of her family, etc.) And when the daughter & father are ready to have a serious discussion about her future the film just cuts away. So the ending just feels unfinished & ambiguous.
5 people found this helpful

sylvia woodsReviewed in the United States on December 10, 2018
1.0 out of 5 stars
I bought this for my middle school grandchildren based on the trailer but...
Verified purchase
I am no homoophobic but a little tired that so much entertainment now has to have some sort of LGBQT theme. 98% of the population are not LGBQT so it just seems disporportionate to reality somehow. I need to read the descriptions much more closely but the trailer did not include that the young girl was exploring lesbianism. I thought it was about a father daughter band. Disappointed.
9 people found this helpful

Kasey LeeReviewed in the United States on September 26, 2018
1.0 out of 5 stars
Hearts Beat Loud is great, but this DVD is defective
Verified purchase
The DVD is correctly labeled, but it plays a French documentary. This is a brand new release. Not sure how this happened, and I’m hesitant to buy a replacement since others report the same problem.

I saw this film in theaters, and it was lovely. The manufacturer needs to correct this issue before it adversely influences the sale of this film!
8 people found this helpful

Amazon CustomerReviewed in the United States on January 27, 2020
1.0 out of 5 stars
Not really "heartwarming" and I hated it
Verified purchase
We did not finish this movie. It was boring, it was unbelievable, it was a just Hollywood shove of their ideals of homosexuality, single parenthood, inter racial marriage - if indeed anyone would be so stupid as to actually legally marry - they should marry on an equal opportunity basis and let black people have their chance! I want to watch a movie with a plot, and not have their "morals" or lack thereof shoved into my face. So what if people marry interracially, I don't need a movie to tell me they should or shouldn't. Hollywood has an idea that "social change" is their mission and anything that shoves that onto the viewers is a good movie. I resent the $2.00.

PayneReviewed in the United States on September 20, 2018
4.0 out of 5 stars
Almost a Classic
Verified purchase
I enjoyed this movie immensely, was actually tearing up just anticipating the ending. What a tremendous screw up, though, to NOT show the father and daughter saying goodbye to each other. The last 10 minutes was just weird and not showing the goodbye when the ENTIRE film is built around that inevitability is what keeps this very good movie from being an out-of-the-park home run. Still, you should see it. There are few movies that depict the modern father/daughter dynamic as beautifully as this one does.
3 people found this helpful
See all reviews
Back to top
Get to Know Us
Make Money with Us
Amazon Payment Products
Let Us Help You
EnglishChoose a language for shopping. United StatesChoose a country/region for shopping.
© 1996-2022, Amazon.com, Inc. or its affiliates