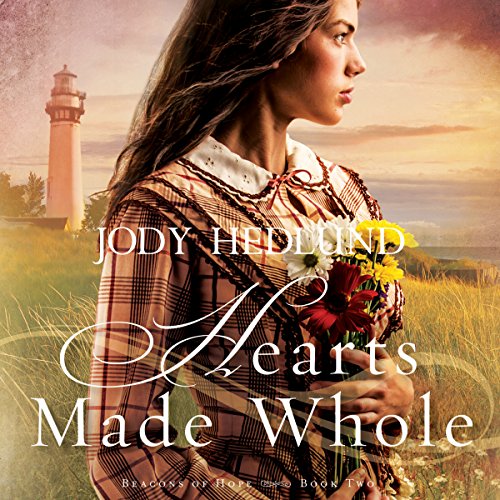 4.7 out of 5 stars
4.7 out of 5
319 global ratings
How are ratings calculated?
To calculate the overall star rating and percentage breakdown by star, we don’t use a simple average. Instead, our system considers things like how recent a review is and if the reviewer bought the item on Amazon. It also analyzes reviews to verify trustworthiness.
Top reviews

Mama Cat
5.0 out of 5 stars Beautiful Historical Christian Fiction
Reviewed in the United States on January 17, 2016
Verified Purchase
‘Hearts Made Whole’ is a historical novel set in post-Civil War Michigan at the Windmill Point Lighthouse. I very much enjoyed everything about this novel, from the setting to the characters and the story itself. It grabbed my heart from the beginning and didn’t let go.

A storm was setting in on Lake St. Clair, and Caroline’s father had to take the doctor back to town, crossing the lake in a little rowboat. Quite a distance from shore, before the eyes of Caroline, her sister Tessa and twin brothers, the rowboat overturned. As hard as he fought to grab the boat, he was no match for the storm. They mourned and grieved, and Caroline took over the lighthouse duties.

The lighthouse inspector brought not only the bad news that Caroline could not keep on as acting the acting lightkeeper, but that the little family, including her bedridden, ill sister, had a week to pack up and leave the cottage as a man returning from the war would take over the position. Caroline had nowhere to go unless she married the son of the local tavern owner and smuggler.

When Ryan, the new lightkeeper arrived, they had not yet moved. He was in no condition to manage the position; Caroline offered to show him the job and he slept in an outbuilding for propriety. Tessa’s deceitful scheme was about to cost Caroline the man she was coming to respect and deeply care for. The explosive situation could also cost her and her younger siblings everything. Where was God in all of this?

This riveting historical drama is even better than I had imagined. Caroline, Tessa, then Ryan were very well developed with the progress of the story. The tavern keeper, his son, and other townspeople were as developed as necessary for their roles as evidenced in their speech and behaviors. Caroline and her siblings, then Ryan, experienced their rich heritage of faith, but were very honest about their feelings and struggles with the Lord in light of their situations. When the novel was through, I wasn’t – it was hard to leave especially Caroline behind!

The story itself demonstrated the historical time period, not in the dry words of dusty history tomes but showing with glowing word pictures the beauty and wild-ness of the location, the culture, and surrounding details. There was not a dull sentence, and every word was chosen well. The second in Jody Hedlund’s ‘Beacon of Hope’ series, it is easily read as a standalone. The title, ‘Hearts Made Whole’, sums up what is needed for the aching hearts and broken spirits of the protagonists, and reflects how their faith might be used. It was easy to be swept away to the lighthouse, see the value of women at that time and the expectations on those as the country struggled to recover from the war. It is not, however, predictable; various plot twists change the landscape of the story with stunning intensity. I highly recommend this admirable, exciting novel to women who appreciate Christian historical fiction of the time period, strong women protagonists, romance, and even mystery. It is one of the best Christian historical dramas I read in 2015, and one that I could absolutely enjoy again.

With a grateful heart, I received a copy of this book through the “For Readers Only” group at The Book Club Network, in exchange for my honest review. All opinions are my own, and no monetary compensation was received for this review.
Read more
4 people found this helpful
Helpful
Report abuse

Dcox
5.0 out of 5 stars Loved it
Reviewed in the United States on June 12, 2021
Verified Purchase
This book was wonderful. Ryan’s struggle with addiction, pain and guilt were very touching. And Caroline’s struggle to take care of her siblings was noble. The attraction between Caroline and Ryan felt real and proceeded at a realistic rate. My only complaint is that the author said forsythias are fragrant(they’re not) and implied you can grow daffodils and lilies from cuttings (they are bulbs so they are propagated by bulb offsets). Since I am a gardener, these little inaccuracies kind of bothered me. Other than that, I thoroughly enjoyed it.
Read more
Helpful
Report abuse

Nicole
4.0 out of 5 stars Love this author so much, not so much the narrator.
Reviewed in the United States on July 23, 2021
Verified Purchase
I've been on a mission reading almost everything by this author. Lately to free up my hands and to be able to accomplish more while still enjoying my book I've switched over to audible. The narration can really make or break a story. The narrator was great in changing up voices for different characters but then at other times just seemed so monotone especially at the end of sentences. Idk maybe it was just me, but I did finish it and I did enjoy, but I don't know that I would be eager to attempt another with this narrator again!
Read more
Helpful
Report abuse

Taylor Reid
4.0 out of 5 stars A Good Read for the Summer
Reviewed in the United States on June 5, 2015
Verified Purchase
Hearts Made Whole (Beacons of Hope #2) by Jody Hedlund is one the suspenseful, romance novels of the summer. From beginning to end the story feels like an episode of Dateline "Who did it?" mixed in with two characters finding love and comfort while depending on God. This novel will keep you anticipating the end and holding out for the war torn hero and the burdens that hang on the young heroine's shoulders. This is a must read for summer!

Wow. I just finished this book and my blood is still pumping from the most intense and heart wrenching ending chapters I've ever read in a Jody Hedlund book. She has definitely stepped up her game when it comes to making the reader physically shake the book with anticipation of the next event. I liked this book. There were a few qualities that were easy to figure out before it was revealed. Yet, still it kept me on my toes as I was reading in eagerness of how it was going to be revealed to me as the reader.

This is the second book in the Beacon of Hope series and I am pleased to say that you don't have to read the first book to get to enjoy the characters of this book. I did not expect this book to be as intense as it was, there was some crazy things that took place in this book so if you are squeamish or don't like to read sections that could make you slightly uncomfortable I'm not sure if this is the book for you. I would recommend another Hedlund book if you are looking for something a little more calm. But if you like books that make you search for clues in the actions and responses of character's then this is the book for you. This book also deals with addiction and substance abuse and how healing comes into that. So this is not a light book, but there are light scenes that break up those sections that make it more enjoyable for the reader.

There were writing decisions for characters that I felt were a little overboard in my opinion, but then again this is set in a different era such as the late 1850s and people did act differently then. So that is probably just a personal commentary on my account.

I did like how independent and strong Caroline was as a character. I did wish that I got to see more interactions with her other siblings instead of just Tessa. And Ryan was as complex as it gets with character development. He was wounded physically and mentally and was constantly working on his spiritual walk with God. Yet, there is one quality that really struck me that was a writing choice and it was Ryan knew he couldn't marry Caroline until he got better himself instead of relying on her. He knew he had to rely on God and that it was a battle within himself that God could help him defeat. Great writing choice on Hedlund's part!

I think that this will be an enjoyable read for those who already love Hedlund's stories and those who haven't even read anything by her yet. It's a suspenseful read that has just the right amount of romance that will leave the reader satisfied.

Rating: 4 out of 5 bookshelves
I received a free copy from Litfuse Publicity in return for an honest review.
Read more
2 people found this helpful
Helpful
Report abuse
See all reviews

Glenda Fowlow
3.0 out of 5 stars Ho Hum
Reviewed in Canada on June 15, 2015
Verified Purchase
I've read almost all of Ms. Hedlund's novels and this is my least favourite.

In the beginning, I was sympathetic to Caroline and felt her pain. I was cheering for her to succeed! Gradually my enthusiasm for her stopped because she continued to be independent without consulting/asking for help. I saw little permanent change in how Caroline dealt with miserable circumstances. Ryan's character was well developed and I really enjoyed his progression.

The storyline became unbelievable when H/h were alone together for a long time and they were not pressed into marriage. The relationship between the two older sisters displayed little redeeming qualities and the heroine contributes to the problem rather than helping. I just couldn't admire Caroline. Sorry, wasn't able to read all the way to the end.
Read more
One person found this helpful
Report abuse

sunny
5.0 out of 5 stars Wow
Reviewed in Canada on May 29, 2015
Verified Purchase
It always amazes me how Jody Hedlund can take her reader through so many emotions, from joy to despair when there seems like there is no way out for the characters. This was a fabulous book that was hard to put down. I loved the characters and the way they progressed and grew as the story went on. Wow!
Read more
Report abuse

Kindle Customer
5.0 out of 5 stars Five Stars
Reviewed in Australia on July 28, 2018
Verified Purchase
Currently one of my favourite authors. Have loved all the books in this series.
Read more
Report abuse
See all reviews
Back to top
Get to Know Us
Make Money with Us
Amazon Payment Products
Let Us Help You
EnglishChoose a language for shopping. United StatesChoose a country/region for shopping.
© 1996-2021, Amazon.com, Inc. or its affiliates