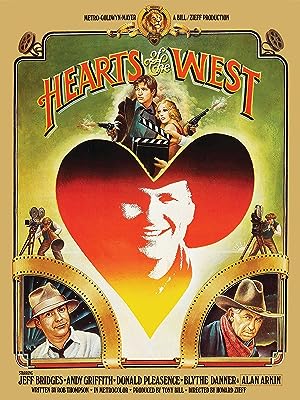 (104)6.51 h 42 min1975PG
Jeff Bridges stars as a dreamy-eyed Iowa farm boy who heads to Hollywood in the 1930s with hopes of becoming a screenwriter. An offbeat comedy with a wonderful ensemble cast.

Bic ParkerReviewed in the United States on October 19, 2019
5.0 out of 5 stars
A love letter to Old Hollywood
Verified purchase
A sweet little tale about an innocent young man making his way in the world -- the world of Hollywood in the early 1930s. Jeff Bridges strikes just the right note of naivety, Andy Griffith discards his aw-shucks persona as the cynical, seen-it-all professional and Alan Arkin turns in another hilarious supporting role as the harried director of 2nd rate horse operas. Some of the comedy is a pretty broad but on the whole a warm, happy film. And dig that singing and dancing bit to "The Pagan Love Song!" No one who enjoys stories of legendary Hollywood should miss this gem.
One person found this helpful

Jay LaneReviewed in the United States on July 16, 2013
5.0 out of 5 stars
Vintage Bridges
Verified purchase
Vintage Bridges! In this delightful 1975 film, Jeff Bridges plays Lewis Tater a would-be author of escapist fiction that features the Wild West, a la Zane Grey, the foremost writer of Western fiction in 1920s dime novels. To that end, our Iowa farm boy has saved enough money to enroll in a Nevada-based college for writers. Rather than send his hard-earned money by mail, he figures he can kill two birds with one stone: if he takes his money to the campus in person, he will also be in a great place where he can learn how to be a cowboy.

By the time he flees into the desert he has been bilked, robbed and disillusioned; but he stumbles onto a movie set and our story begins.

We see:
* Jeff Bridges ("True Grit") ever so young and ever so appealing. His character has just the right blend of naiveté and smarts, but his descriptions of his drama as it unfolds are hilarious. He always reminds anyone who will listen that he's a writer!
* Blythe Danner ("The Lucky One") is a production assistant on the movie set. With an ever-present cigarette dangling from her mouth, she can see our hero's potential before anyone else.
* Andy Griffith ("Waitress") is one of the extras in these westerns, which are produced like sausages in a factory. An actor's pay is determined by when he dies and if he has a line.
* Alan Arkin ("Argo") is the over-stressed director. His methods for motivating his actors are very funny, and very effective. Arkin won a New York Film Critics Circle award as Best Supporting Actor for this role.
* Herb Edelman ("The Golden Girls") is the money man, weary and disgruntled.

This modest little PG-13 outing has a charming hero, a wise heroine, sly villains, delightful peeks at early film making and enough awards and praise to prove that sometimes audiences are right! For years, all I could get was the VHS tape, but I see that it is now available on DVD; I got mine from Amazon!

David E. BaldwinReviewed in the United States on October 9, 2012
5.0 out of 5 stars
Another Gold Nugget From The Seventies
Verified purchase
In the Seventies Hollywood made a lot of films that explored the early days of filmmaking in the Twenties and Thirties. Hollywood was also adept in the Seventies in making films that emphasized character and story. "Hearts of the West" is an amalgamation of these qualities and it's a real winner. The film concerns a Midwest farmboy, Lewis Tater(Jeff Bridges) who fancies himself a writer of Western prose influenced by the style of Zane Grey. He enrolls in a Nevada correspondence school and decides to visit the campus only to find out it's a P.O. Box. Through a series of circumstances he finds himself in the employ of Tumbleweed Productions, a Z movie outfit that manufactures cheap oaters. Lewis is thrilled to be employed by an actual moviemaking company, however, it isn't long before he finds out that Tumbleweed is a miceocosm of the big studios in that they use you up and spit you out. Now one would think this is a cynical expose of the Dream Factory. Lewis remains an appealing figure throughout maintaining his optimism and integrity. Even the film's marginal heavies, a penny-pinching director(Alan Arkin) and a duplicitous extra(Andy Griffith) are complex characters so nobody's wearing the proverbial black hat. The film displays an affinity instead of a dismissive attitude towards the lower rungs of Hollywood whose yarns appealed to kids of all ages. "Hearts of the West" is a gem from the era that produced so many great films. Has enough time lapsed for Hollywood to start making movies about filmmaking in the Seventies aside from "Boogie Nights"?
4 people found this helpful

Michael ClarkReviewed in the United States on March 18, 2015
4.0 out of 5 stars
Fun and Games with Jeff Bridges
Verified purchase
Early Jeff Bridges bit of whimsical comedy, with nice supporting cast lead by Andy Griffith. Bridges plays a naive aspiring Western writer who stumbles into a job as a cowboy actor while escaping the evil clutches of a couple of bumbling con men. It's all lighthearted and fun. Puts one in mind of another early Bridges venture that's worth seeing -- Rancho Deluxe. Alan Arkin has a nice role here as the director. It would have been nice to see Griffith in more performances.
2 people found this helpful

Amazon CustomerReviewed in the United States on January 4, 2019
3.0 out of 5 stars
a silly comedic western
Verified purchase
this was a waste of good talent. the movie was made in 1975 but was set in the 1930s. it a clumsy silly story that try to be funny. it's not too bad of a movie,should of been a better story line.

Daniel DuncanReviewed in the United States on June 13, 2021
5.0 out of 5 stars
Classic film
Verified purchase
The plot and the acting are both comedic and allegorical...,

Vince MarinelliReviewed in the United States on September 16, 2013
4.0 out of 5 stars
Early Jeff Bridges
Verified purchase
This is Jeff Bridges as a kid, really, and a nice film. He wants to write westerns and winds up acting in Hollywood cowboy movies. Bridges plays a wide-eyed innocent and does it completely convincingly. Which is a bit of a change from darker roles he's got recently. It really is a very good film. Andy Griffith is great as an aged extra on the set and a failed author. Alan Arkin is terrific as "the producer." It's a hard to find film, but it's a good one.

G. OGARAReviewed in the United States on December 30, 2008
5.0 out of 5 stars
At Play With Western Myths
Verified purchase
A would-be writer with a fervid imagination heads west to enroll in a "Famous Writers School" to further his ambition to pen Zane Grey-type westerns. The "school" is just a mailbox in a whistle-stop town, but the young writer finds himself with a suitcase of grifters' money and bumbling killers on his trail. The natural destination for this fantastical story is Hollywood, and that's where the movie smartly (and lovingly) pokes and jokes at the myths of both the Wild West and movie-making. Jeff Bridges is perfectly cast, Blythe Danner is every boy-man's dream of affection, and Andy Griffith does some serious acting. PLEASE get this into DVD.
3 people found this helpful
See all reviews
Back to top
Get to Know Us
Make Money with Us
Amazon Payment Products
Let Us Help You
EnglishChoose a language for shopping. United StatesChoose a country/region for shopping.
© 1996-2021, Amazon.com, Inc. or its affiliates