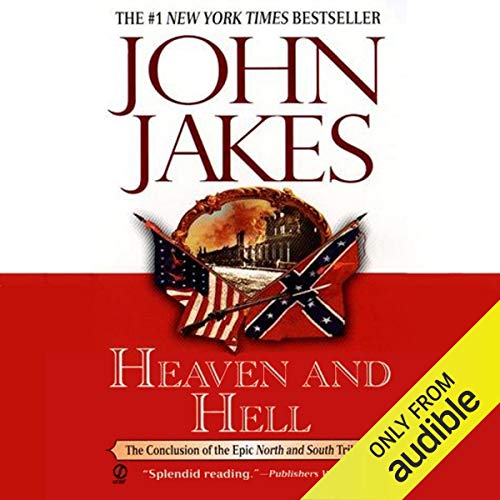 Heaven and Hell: Volume Three of the North and South Trilogy

From America's master storyteller and writer of historical fiction comes the dramatic conclusion to the North and South saga.

The Civil War has ended, but the Hazards and Mains have yet to face their greatest struggles. Even as the embers of old hatreds continue to burn in the heart of a nation torn apart by war, a new future in the West awaits a new generation of Americans seeking a life of their own - and a place to call their own.

Filled with all of the vivid drama, passion, and action that have made John Jakes the acclaimed master of historical fiction, Heaven and Hell is the tumultuous final chapter in one of the greatest epics of our time.

Special invitation from Audible!
Learn more about Membership
List Price: $39.95
You Save: $4.96 (12%)
By completing your purchase, you agree to Audible’s Conditions Of Use
Sold and delivered by Audible, an Amazon company
Share

4.7 out of 5 stars
4.7 out of 5
282 global ratings
How are ratings calculated?
To calculate the overall star rating and percentage breakdown by star, we don’t use a simple average. Instead, our system considers things like how recent a review is and if the reviewer bought the item on Amazon. It also analyzes reviews to verify trustworthiness.

JerseyGirl
5.0 out of 5 stars I hated for it to end
Reviewed in the United States on September 1, 2014
Verified Purchase
I spent this summer of 2014 reading John Jake's trilogy. I just finished the last in the series and I closed the book with a sigh. I did not want it all to end. This book concludes the saga of the two families, one from the north and the other from the south. It deals with the aftermath of the war and how the two families have lost much and how they cope and begin the long journey back to heal a nation that has fought and lost so very much.

The Main family legacy is carried on through cousin Charles who has fought in the Civil War and has lost the love of his life but gained a family nevertheless. However, because he needs to keep moving and to stay employed he signs on with a man who buys ponies from the Indians. In some of the saddest scenes of the trilogy, Charles will loose this friend at the hands of the Indians. This part of the story was so violent and so sad that I was crying at the end.

Charles will pick himself up and try again to make a life for himself by joining up with a band of men who are being led by General Custer to round up Indians and keep the men who are building railroads safe from the Indians. Again a truly sad and very violent part of the entire trilogy is one that I have still not stopped thinking about. Charles is on his last stand at this point and returns to his family and to the woman he loves.

All three books are just superb. The violence in all three of the books, but particularly the last one, can be upsetting. The violent scenes are not for the fainthearted. John Jakes attention to detail and his amazing ability to bring the past to life are really unequaled. I was interested to read at the end that he took certain liberties with General Custer's personality. I did not know that Custer was such an awful man. I am going to try and find out more about him after reading this book. One thing is for certain, John Jakes has a great antipathy for him!

Do yourself a favor. Look up these books at the library or purchase from any of the used book seller's here on Amazon and read them now. You are in for a real treat!
Read more
5 people found this helpful
Helpful
Report abuse

ceecee
5.0 out of 5 stars A great historical novel
Reviewed in the United States on September 22, 2013
Verified Purchase
The North and South Trilogy comprises the books "North and South", "Love and War" and "Heaven and Hell". It is in its entirety, in my opinion, perhaps the finest fictionalised account of the American Civil War ever written. The books look back to the years preceding the hostilities and cover the build up to the war and the conflict and its consequences in terms of the death and destruction, the medical services, the logistics of the war effort, the politics of international relationships, the blockades and the day to day lives of those involved. The history is impeccable and the story is marvellously well plotted and convincingly real and the reader feels totally involved with the families of the Mains and Hazards. It is necessary to read all three and to read them in chronological order and the reward for so doing is wonderful entertainment and fascinating history. "Heaven and Hell" covers the years immediately following the surrender of the Confederacy and the early years of the post war settlement of the American west. A cracking good read and well worth the time spent doing so.
Read more
2 people found this helpful
Helpful
Report abuse

Greg
5.0 out of 5 stars Great Trillogy
Reviewed in the United States on March 28, 2019
Verified Purchase
Probably the greatest American Historical Fiction series ever written. Not much more to say than that.
Read more
Helpful
Report abuse

Jon C. Halter
4.0 out of 5 stars Good Guys and Baddies
Reviewed in the United States on September 3, 2016
Verified Purchase
NORTH AND SOUTH
Good Guys and Baddies
In his North-South Trilogy, covering the years before, during, and immediately America’s Civil War, John Jakes uses a familiar literary device: following the lives of two families, close friends although from opposite sides of the conflict. (His success with this series and his eight-volume “Kent Family Chronicles,” among others, helped boost the popularity of this family-history genre, which has been dubbed “clanbacks.”) He says he promised himself that this story would not be “Gettysburg again,” so there isn’t much depiction of the war’s major battles, only references to them having taken place. Characters do rub shoulders with real historic personalities, however, like Gen. Armstrong Custer, Sec. of War Edward Stanton, and others.

However, his many characters are similar to the point that it’s not easy to tell them apart. The “good women” are all Melanie Wilkes, with a little bit of Scarlet O’Hara’s spunk thrown in to deal with moments of crisis. The “good men” are thoughtful, prideful, quick to take offense, slow to recover from trauma, and ultimately open to new ideas and eventually end up on the right side of the war’s central issue: the opposition to slavery. The “baddies,” men and women alike, are without redemption, scheming, quick to take offense, egotistical, revengeful (to the point of dedicating their lives to “getting even” for a perceived slight), and totally on the wrong side of history, believing in the total superiority of the white race over the black race. The evil men, in particular, are invariably fat, sweaty, and loathsome.

The worst of these villains is totally delusional and deranged. He stalks the two families throughout the trilogy, vowing to take revenge on two brothers, one from each family, whose actions caused him to be expelled from West Point when the three were cadets in the 1840s. He has no redeeming qualities, although in Volume Three it is revealed that he was the product of incest and an extremely abusive childhood. This does him no good in the plot, however. Although he wreaks havoc on the families, he eventually meets his death twice, miraculously surviving the first but ending up on the end of a rope.

Jakes, who has a background in theater as well as literature, is a fan of melodrama. Without fail, whenever a hero or heroine is threatened with violence or death, a “good guy” arrives in the nick of time to the rescue. His also loves irony, killing off main characters when least expected.
Read more
2 people found this helpful
Helpful
Report abuse

lacy pruitt
4.0 out of 5 stars Good read, but not for the faint of heart.
Reviewed in the United States on August 20, 2013
Verified Purchase
I love the North and South trilogy. With that being said, some scenes are just hard to read due to their graphic nature. (maybe I'm just a wimp!) I love Charles Main's character for the most part and that seems to be what this book mostly concentrates on. I wish we could've heard more about Billy and Brett. I was thrilled to finally see Bent get his due. Well written book by a wonderful author.
Read more
One person found this helpful
Helpful
Report abuse
See all reviews

Kindle Customer
3.0 out of 5 stars The John Noke Trilogy, an excellent story.
Reviewed in the United Kingdom on August 19, 2019
Verified Purchase
The page sizes were too small and the print left no margins top, bottom and both sides. We purchased all the Trilogy which collectively had over 2,500 pages, not easy to handle by invalids or for bed time reading.
Read more
Report abuse

DL
5.0 out of 5 stars Great Read
Reviewed in the United Kingdom on November 2, 2010
Verified Purchase
I loved the TV series, and so was excited to read the trilogy books. I have to tell you they don't disappoint, if you think that by watching the TV show you're reading the books, think again! The books are much better and for someone who enjoys a good story in an enthralling writing you won't be disappointed by this, if you read the books in order!
Read more
3 people found this helpful
Report abuse

C. yilmaz
5.0 out of 5 stars gift for a friend
Reviewed in the United Kingdom on September 24, 2014
Verified Purchase
A gift for a friend who is desperate to read this trilogy, the three books will delight her.
Read more
Report abuse

chespes
5.0 out of 5 stars Excellent Reading
Reviewed in the United Kingdom on November 14, 2014
Verified Purchase
Brilliant trilogy so far! Haven't got to this one yet but if the other two are anything to go by then I'm in for another riveting read.
Read more
Report abuse

martin
3.0 out of 5 stars Three Stars
Reviewed in the United Kingdom on January 7, 2016
Verified Purchase
good price
Read more
One person found this helpful
Report abuse
See all reviews
Back to top
Get to Know Us
Make Money with Us
Amazon Payment Products
Let Us Help You
EnglishChoose a language for shopping. United StatesChoose a country/region for shopping.
© 1996-2021, Amazon.com, Inc. or its affiliates