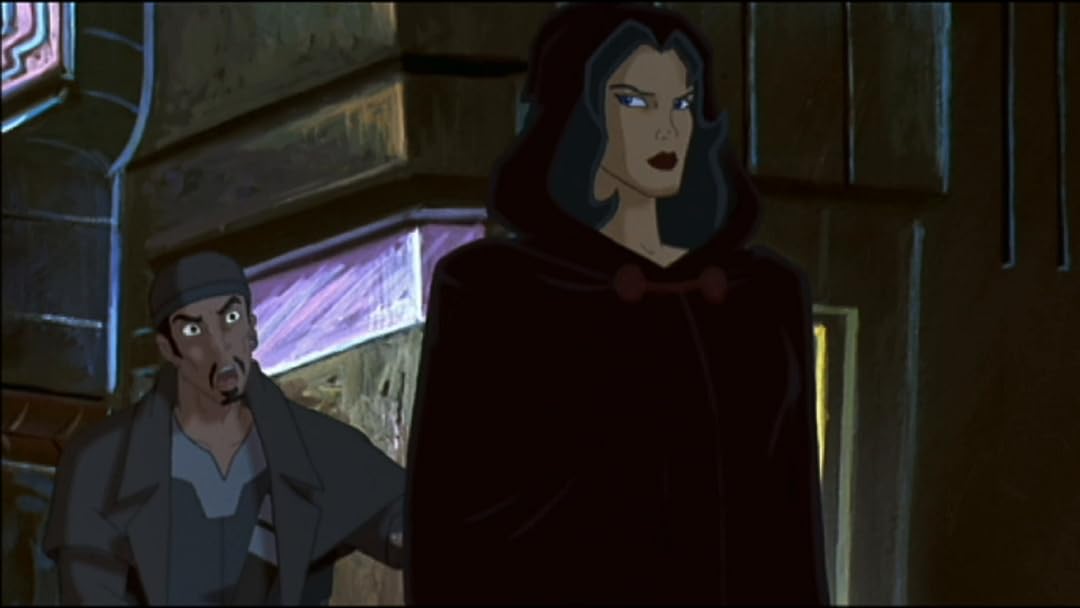 (1,462)
1 h 28 min2000X-RayR
A sexy starpilot seeks revenge against the power-crazed maniac who destroyed her homeworld and kidnapped her sister. A seamless blend of music, action and state-of-the-art animation starring the voices of Michael Ironside, Julie Strain & Billy Idol.

Vic KanidReviewed in the United States on September 18, 2021
1.0 out of 5 stars
Easily the worst science fiction cartoon
Verified purchase
The original 1981 Heavy Metal movie not only had terrific music that actually went with what was going on film-wise but its collection of stories tied together by the cursed orb paralleled the French comic book series it's based on.

This mess of a movie goes wrong on so many counts. Music stinks and doesn't even go with what's happening, story stinks and the whole mess just isn't entertaining. I can't imagine why it's rated so high when it is so, so bad.

SgiblinReviewed in the United States on September 12, 2021
1.0 out of 5 stars
Triumph of writing and animation for the 7-11 year old group
Verified purchase
I think it's a real testament to humanity as a whole could take a small group of 7-11 year old boys and allow them to write, direct and animate a movie.
From the stunningly simple plot, set in a world so juvenile that even to admit a plot hole exists is giving the movie to much credit.
The animation just a hair above Saturday morning cartoons from the early 80's level might be charming to some.
The jokes in the movie are pure 4th-5th grade comedy gold.

Honestly this is bad, truly bad.

DougReviewed in the United States on September 24, 2021
1.0 out of 5 stars
A sad assault of the original
Verified purchase
The original Heavy Metal is a true classic. This is an abysmal attempt to carry the torch. The sound editing is horrendous making it impossible to follow the story. Dialog goes from almost screaming loud to barely audible. The graphics varied throughout with parts of the animation being super fuzzy while other parts had nice realistic detail and everything in between but there was no rhyme nor reason as to what level was applied to any particular scene. Sorely disappointing.
16 people found this helpful

WJBReviewed in the United States on September 28, 2021
1.0 out of 5 stars
Easily a failure to everyone who loved Heavy Metal the movie.
Verified purchase
Even the opening could not live up to the opening of the original. The biggest let down for me was the music. The original had one of the best movie sound tracks and possibly the best for non-original music. All the songs in this movie were too loud and too fast. The next let down was the story; instead of a collection of stories born from the pages of Heavy Metal magazine and connected by a plot, this movie was based on one story from the magazine. And the story was not as entertaining as any of the stories in the original. The third let down was the reduction in voluptuous women size; the women had much less of a hour glass figure. The final let down and least important was the use of CGI at parts where I would have liked everything in classic animation.
12 people found this helpful

BdgoldReviewed in the United States on November 5, 2017
1.0 out of 5 stars
Would not watch again.
Verified purchase
This was pretty awful. As a kid I grew up on Heavy Metal. I saw there was a sequel, and thought it might be based on the same premise--an orb changing hands in fantastic series of cartoons which are purposely not connected aside from the orb. What we got was a run on of Taarna (aka cheesing in Major Boobage from South Park). It's like they chose the lamest skit from the Classic Heavy. I'm glad I watched it just for bragging rights, but I would not suggest it unless you are a die hard fan of Heavy Metal and want to see how they eff up the sequel.
43 people found this helpful

joel wingReviewed in the United States on September 18, 2021
2.0 out of 5 stars
Not as good as the original
Verified purchase
I can remember the Heavy Metal magazine and the original movie when it came out in the theaters. That was a great mix of sci-fi and horror with male fantasies and Rock music. I had trepidations about the follow up being able to meet that high standard. Well this one still had the fantasies with cartoon nudity. The music was run of the mill Heavy Metal. I didn’t remember a single tune afterward. The story was about a madman and a woman warrior who wanted revenge upon him which was a derivative of one in the original. Finally the animation was routine just like a kids’ cartoon. Overall that meant it didn’t stack up.
10 people found this helpful

Phillip AllenReviewed in the United States on September 9, 2019
4.0 out of 5 stars
ACTUALLY BETTER THAN THE FIRST -- BELIEVE IT OR NOT
Verified purchase
I'd always considered Heavy Metal to be a classic film; one of those films you see as a stupid teenager that leaves you with the impression you've just seen something exceptional. Well, sorry to break it to you, but Heavy Metal 2 is a far better film. It is not incoherent and inconsistent, as is the first film. The animation is of a much higher quality, better drawn, much smoother. And, no, it isn't all computer animation. In fact, very little computer animation is used; only for the bits here and there that can't actually be accomplished by hand -- unless you want to spend 10 times your budget. So, 99% is actually hand animation. But the difference is in the quality. This film has a much higher quality of animation than the first.

The characters in this second film are presented much better than in the first. You care about them a bit more than in the first film. This is rather obvious, since you follow them throughout the film. In the first, they come and go too quickly for you to develop any degree of emotional connection to them.

The Julie character in this second film is truly magnificent. In fact, the actress who voices this character actually looks entirely like her animated character in real life. In other words, had this film been live-action, she could easily have portrayed her character convincingly. And that's saying a lot.

The Tyler character must be one of the absolutely most despicable, revolting, nauseatingly-evil personas ever created by Michael Ironside. He does a perfect job in creating the ultimate evil creep. All you want to have happen is for Julie to catch up to him and tear off his head -- slowly and painfully.

The secondary characters are entirely convincing. The little rock guy is quite sympathetic; even cute.

All said and done, I recommend this film.. My one and only complaint -- and it's a BIG complaint -- is the "music". If you can even call it that. In truth, it isn't music at all. It's noise, garbage, with an electronic drum backing. But it has no relation whatsoever to Heavy Metal. None at all. In fact, they should never have called it Heavy Metal 2. Because it isn't. Another title would have been more logical, a better fit. And the score should have been just the orchestral portions and leave it at that. They were just exploiting the success of the Heavy Metal name; that's all.

So, other than the soundtrack, I recommend this film. Perhaps, when the noise starts, just ignore it, or stick your fingers in your ears or something. Too bad they had to ruin a good film with such schlocky garbage. Oh, well. Can't have everything, I guess.
12 people found this helpful

Bob EvansReviewed in the United States on September 25, 2021
3.0 out of 5 stars
Not As Good As The Original By A Long Shot... BUT
Verified purchase
I have mixed feeling on HM2000. The original Heavy Metal was simply iconic, unforgettable. I saw it in the theater and again many times over the years. Its just so good you can watch it many times. The original was a series of vignettes that were woven together so well by this evil orbs travels and the the writing was much more amusing and just had a lot more varied action and times. The short stories were just so good. This was sort of a long version of the Taarna sequence from the original but much less soulful and Taarna was like a super warrior where as Julie was, well, just a farm girl. The characters were just not that compelling in this movie. It was still good but you end up grading it on a steep curve because the original was so damn good. Animation wise it was not as good as the original but it was pretty good. Just not as cool or iconic. And then we get into the music. It was mostly forgettable trash even though there are some great bands like Pantera, it just seemed like noise and nothing catchy about it. It didn't enhance the scenes at all. If anything it detracted from them. In the original when Mob Rules starts playing when the orb influenced bad guys attack the city, it just fit, it clicked. In the original the music always fit the scene perfectly. Here the music seems forced and not really doing anything but to say, WE HAVE MUSIC. I gave it three stars. Its watchable but its not going to blow you away. At least it didnt blow me away. The original did. It was epic.
5 people found this helpful
See all reviews
Back to top
Get to Know Us
Make Money with Us
Amazon Payment Products
Let Us Help You
EnglishChoose a language for shopping. United StatesChoose a country/region for shopping.
© 1996-2022, Amazon.com, Inc. or its affiliates