Heavy Metal Training Systems and millions of other books are available for Amazon Kindle. Learn more 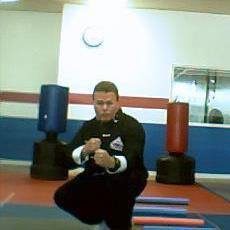 by Tony Salvitti (Author, Illustrator)
4.0 out of 5 stars 4 ratings
See all formats and editions
Sorry, there was a problem loading this page. Try again.

Tony Salvitti, is originally from Los Angeles, California, and attended and graduated high school in Kaiserslautern, in Vogelweh West Germany. Where he was trained in Muay Thai-competing against U.S. Army soldiers in the light heavyweight division(later becoming a heavyweight in natural bodybuilding at 230 ripped lbs.), hatha yoga, Judo, and lettered in track and field. From there he went to college, before being recruited in the U.S. Navy in 1981 (with the awesome crew of the U.S.S. Peoria LST-1183 Assault Squadron Seven San Diego, CA, and later the TWR-1 Diamond Norfolk, VA.) served with pride and honor. Trained in Japan, Korea, and China, in martial arts as well as been a natural heavyweight bodybuilder. Then worked for the U.S. government in Langley, VA. until 1986. Trained on the weekends at "Vince's gym" in Studio City, CA. under the tutelage of the great trainer Vince Gironda. Later moving to Norfolk, VA. Becoming a accomplished stone mason, building marble and granite mausoleums, and installing monuments markers, from Virginia Beach, VA. to North Carolina. Also working with nuclear weapons and reactors, as well as the latest in composite materials for aircraft. During which he traveled around the world over 6 times. Became a diver and retrieved torpedo's for nuclear fast attack submarines on the east coast of the USA. A devoted student to his late Sifu~Kwan Li, becoming his number one student(and later holding the rank of "Sifu" in both Tai Ch'i Chuan, and Hsing-i Chuan(Xing Yi Quan) training for over 35 years in martial arts (specialized in Iron palm, and Dragon claw kung). A competitive natural bodybuilder since 1976 and last contest was in Sacramento, CA. July 22, 2000 "The 2000 INBF Capital City Natural Bodybuilding Championships". Built his first new home in 1985 in Virginia Beach, VA. after getting out of the U.S. Navy active duty. Becoming a freelance writer, and writing technical books and articles for the U.S. Government.

He became an avid treasure hunter/metal detecting both on land and under water, as a hobby, which he still does to this day. Some of his other interests and specialties besides natural bodybuilding, Occult, magic, witchcraft, Taoist sorcery, Development of esoteric powers, Chinese herbalist medicine, certified master of acupressure, rank of Sifu in Tai Ch'i Chuan, and Hsing-i chuan(Xing Yi Quan),World Black Belt Bureau member, Japanese archery (Kyudo, and Kendo), All types of cooking, wine tasting and gardening fresh food, hypnosis, binaural beat-frequency and brain wave activity, animals, artwork for other author's book covers, photography, archeology, rock climbing, drawing, painting, sculpting, woodworking, welding, designing new equipment and devices and exploring distant geographic points of interest and learning about new cultures and customs. The "Black Dragon Ch'i Kung Dojo", is where he will be found teaching students "Ch'i Kung" (Qi Gong), and being a personal trainer to all natural bodybuilders, and athletes in Roy, Utah and surrounding cities.. He can be reached via direct email: worldbodybuilding@live.com

4.0 out of 5 stars
4 out of 5
4 global ratings
How customer reviews and ratings work

Julie Allen
5.0 out of 5 stars Great book!
Reviewed in the United States on March 12, 2019
There is a lot of good and useful information in this book. Well written.
Read more
Helpful
Report abuse

Amy
5.0 out of 5 stars Great book!
Reviewed in the United States on April 18, 2016
Such a great book for getting your body on track and developing a healthy lifestyle!
Read more
Helpful
Report abuse
See all reviews

keith01
3.0 out of 5 stars an okay book of vince gironda's routine.
Reviewed in the United Kingdom on December 24, 2014
Verified Purchase
Okay not a great book but not a bad one, Tony Salvitti this time does the Vince Gironda 8 sets of 8 reps routine. These workouts are quite high in intensity, so why am giving this book only three stars, well the answer is simple if you have read any of his bodybuilding books, he spends 4 to 5 pages of training the rest of his books gasing about supplements, which you can get the same details on the internet for free. For once i would like him to concentrate on the routine in a book instead of page filling with the usual crap.
Read more
Report abuse
See all reviews