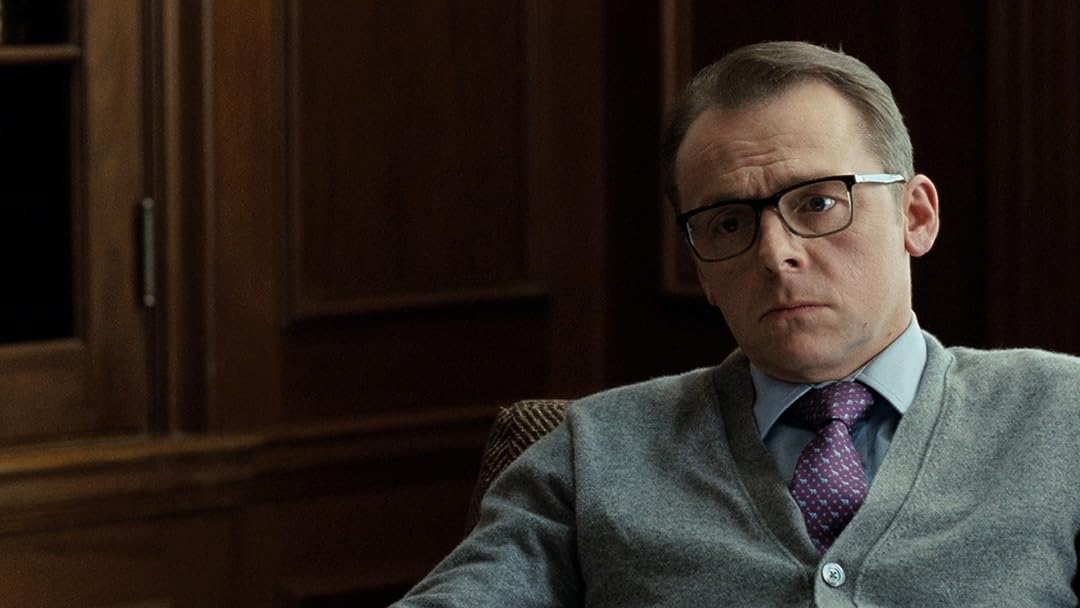 Hector and the Search for Happiness

(1,398)
6.91 h 54 min2014X-RayR
Hector, played by Simon Pegg, is an eccentric London psychiatrist in crisis. His life seems to be going nowhere while his patients just aren't getting any better. One day, he breaks out of his sheltered life to go on a global quest to discover the meaning of happiness - a thrilling, dangerous, and hysterical journey as he tries to answer the ultimate question: does true happiness actually exist?

Tom MadisonReviewed in the United States on June 13, 2021
5.0 out of 5 stars
Happiness Is Keeping Things in Perspective
Verified purchase
Watching this film reminded me of the time I went to work for an interior design firm, right after having come off a three-month bare-bones trip through Central America (outfitted Indiana Jones-style, much like Hector is on his journey). It's true that some of the friendliest and happiest people I met during those travels were living with a severe lack of material comforts. Real joy seemed to flow from the connection of family and friends helping, respecting and honoring one another. Then I returned to the U.S., only to find myself catering to shallow impatient folks of considerable financial means (comparatively speaking) who could burst into tears and/or fits of rage if the particular shade of their wall color wasn't exactly as they had hoped for. Obviously there was much more underlying their HGTV-inspired psychodramas than the "crisis" of a questionable design choice. ("Transference" I think they call it?) Psychiatric consultation -- for both client and staff -- might've proved helpful, but as we had no "Hector" in our employ, this sense of privilege and entitlement reigned unfettered and I wouldn't remain long on that job. It really is a big disconnect to see people who have every creature comfort in the world -- for which they should be truly grateful -- find ever more creative ways to focus on being miserable, angry and joyless; as evidenced here in one sad homophobic reviewer's accusation of the film's "liberal social engineering." (Ha!) The insignificant little side note to which he makes reference -- Michael coming out to Hector -- must take up all of 20 seconds, if that . . . and, uh yeah, blink and you'll likely miss it! But how telling is it that there's not one whimper of "moral outrage" from our scandalized reviewer over the significant storyline involving a Chinese prostitute and Hector's attempt at cheating on his girlfriend with her! But watch someone do nothing more than TELL someone else they're gay and it's "Whoa! What an outrage! Stop the film!" Apparently this self-serving freedom to cherry-pick what's acceptably sinful is a hallmark of right-wing conservative propaganda. Lie, steal and cheat on your spouse? Hey, no problem! (Looking at you, #45.) However, loving someone of the same gender gets these emotionally fragile pseudo-moralists' panties in a twist. So what is it about our angry sad-sack culture that causes a person to take in all the varied elements of a two-hour film designed to make you think about the meaning of happiness, only to decide to get all agitated and unhappy by focusing on the one miniscule 20-second scene that doesn't fit within their narrow view of the world? Obviously there will be folks like that for whom the message of this film (and life) will continue to fly right over their heads, and they'll remain all the sadder and unhappier for it. But for the rest of us willing to throw off the myopic blinders of entitlement grousing, we can continue to learn how to celebrate one another and the bounty we share -- in all its glorious diversity -- and then, perhaps, discover happiness in the pursuit and embrace of such expansive awareness.
39 people found this helpful

Tina KReviewed in the United States on July 14, 2019
5.0 out of 5 stars
You'll be happier for having watched this film!
Verified purchase
This film has it all - humor, sadness, fear, confusion, lonliness, connection - and above all, love. Simon Pegg expresses the entire gamut of human emotion on his quest to discover what it is that makes people truly happy, somehow making us feel right along with him. Pegg is far more than a comedic genius; he's a serious actor with the chops to take on any role in film today. Spoiler alert: Having once stood with a gun against the back of my skull during an armed robbery, I'll never forget the flood of thoughts and feelings that swept through my mind. In the scene where Hector is about to be executed, Pegg expresses every single feeling I experienced during what I believed to be my final moments of life. He's that good. Don't miss a most enjoyable, entertaining, uplifting film. Get Hector and the Search for Happiness; I promise you'll be noticeably happier when the ending credits roll!
48 people found this helpful

GReviewed in the United States on January 31, 2021
1.0 out of 5 stars
Offensive Premise (SPOILERS!)
Verified purchase
PUKE! Hector ultimately discovers that his wife is the love of his life -- after he thoughtlessly abandons her, has sex with a college student, and chases after an old girlfriend. Uh, ...okay. We're also supposed to accept that Pegg's neurotic little weasel of a character somehow has an irresistible magnetism, so much so that everyone he meets in his adventures is drawn to him and wants to do anything possible to make him happy. Yeah, sure. I thought this would be a nice uplifting movie, but the entire film is preposterous and idiotic, and the only payoff at the end is anger and disgust with the stupidity of the plot and the writing.
26 people found this helpful

Topdog-182Reviewed in the United States on November 19, 2020
2.0 out of 5 stars
Wasted cast but some nice locations.
Verified purchase
This is a story about the foibles of an immature man growing up, wrapped up in a rather foolish and clumsily put-together facsimile of a 'journey' in search of 'finding oneself'. I think the filmmaker thought to a make a movie engendering lightness and humor combined with little introspection, kind of a la 'Love, Actually' (whether you love or hate that one); but it certainly falls well short. The screenplay, direction, and editing lacks nuance, subtlety, and skill, even for 'light' movie. That said, I find it really unfortunate that some reviewers feel the need to reduce anything which they dislike to their simplistic political preconceptions, however irrelevant.
14 people found this helpful

Thinker3Reviewed in the United States on November 22, 2020
3.0 out of 5 stars
Trite and predictable
Verified purchase
Hector is a successful psychiatrist with very little insight into his patients and even less insight into himself. His totally regimented life is sustained by his long term girl friend who knows him much better than he knows himself. Coming to the realization that he is not making his patients happier because he has no idea what happiness is, he embarks on an international research project to interview various people to try to discover what happiness is. His adventures on this trip are the movie. The film has a chance to exploit stereotype about different cultures. It isn’t boring, but neither is it very engaging. The big mystery of the film is how someone could complete medical school and psychiatric training, and then practice psychiatry for decade while being so completely immature and, indeed, clueless about human relationships. Don’t expect any new insights here, but you may enjoy having what you knew all along affirmed.
9 people found this helpful

Texantothebone2500Reviewed in the United States on June 5, 2018
5.0 out of 5 stars
My new favorite!
Verified purchase
I was not expecting much of this movie, it was on my watch list for the longest time. Today was one of those days when my "black dog" layed me low and I was desperate for anything with happiness in it. This beautiful, lovely, moving, and hopeful film chased that big ol' snarling black dog away and locked him outside from where he couldn't get to me! I know the dog will return again but for now I am hopeful and happy! Such a great film. Give it a chance, it may be the best medicine you've taken in a while!
24 people found this helpful

ShinyReviewed in the United States on January 10, 2019
3.0 out of 5 stars
L.A and Bust
Verified purchase
I love Simon Pegg so that's why I watched this movie. Despite slick production values, the film delivers - then gives us an incredibly flat and "Hollywood ridiculous" ending. Pegg is strapped into a machine that looks as if it's a Halloween costume. The so - called science is simplistic and hackneyed.
I stopped watching during Pegg's crucial phone call with his partner, I saw what the ending was going to be and I didn't need to see a second more.
" I'm happy, " a blond, famous actress' character deadpans. She's as about as happy as a typhoon. The script here deteriorates somewhat- she's not given much to work with. There were so many choices the writers and producers could of made with her character that they chickened out from.
The film up to that final L.A segment was really good. Some priceless shots during Pegg's kidnapping in the taxi. The visit to the monastery - beautiful. ( Are those real monks or actors ?! )
If you like Simon Pegg, you won't be disappointed for the first hour and 40 minutes of this film. For those interested in the soul searching aspects of travel, plus stunning scenery, you'll like this film.

MLYReviewed in the United States on July 18, 2021
2.0 out of 5 stars
It's Not Realism About Traveling; It's Overly Scripted
Verified purchase
It's Not Realism About Traveling; It's Overly Scripted. At first, I thought the lead's travels were in a semi-documentary style, until scripted caricatures of every culture he encountered kept appearing. This movie is offensive and full of privilege. At one point in his journey, an entire African village dropped everything in their lives to have a big dinner and block party just for him, twice. They even made sure to have a welcome back banner made for his surprise arrival. Supreme nonsense. I'm expecting his journeys to have been an elaborate dream of his own ego.

It's a shallow movie about a "me first" man who abandons everyone, and expects them to be happy for him.
It is definitely neither a raucous comedy, which is what you would expect from this actor and the poster, nor a respectful travelogue.