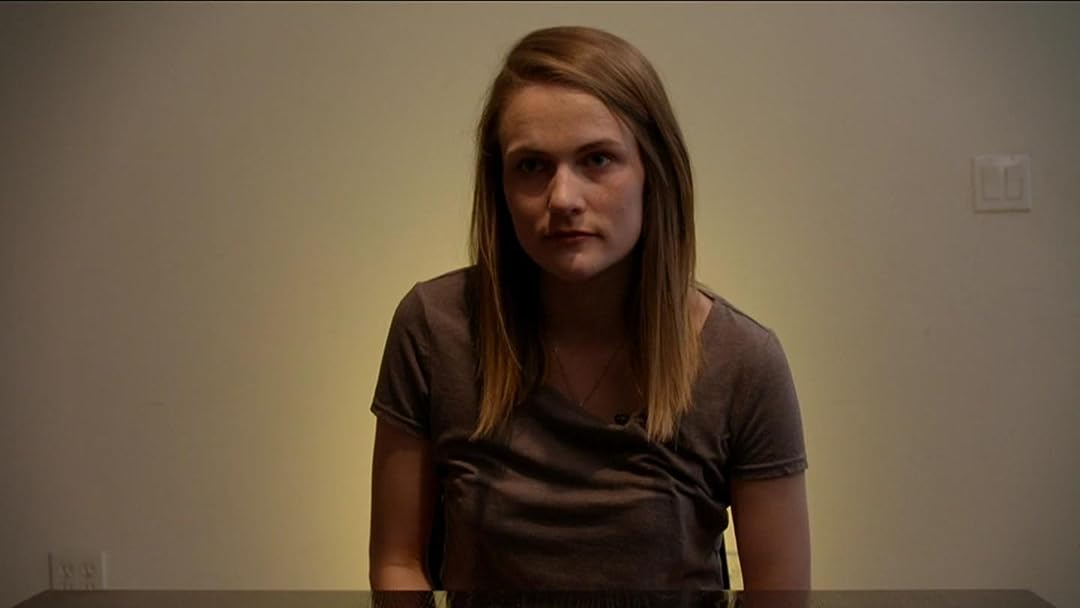 (2,244)
6.41 h 31 min2016X-Ray18+
On October 8th, 2009 a haunted house attraction opened its doors to the public in upstate New York. The entire crew was found dead, except for one. Five years later a documentary crew found her and the video footage from inside the house.

SophieReviewed in the United States on June 7, 2017
5.0 out of 5 stars
Should really have higher ratings !
Verified purchase
This is one of those movies that you overlook because you think it's cheap but after scanning over it for the 5th time you think "Oh why not give it a shot"? So you start watching it and you begin to see that it is a really great horror movie and it sticks with you days after you have watched it. I am so glad that I gave it a chance and I hope others will too. It is one of the scariest movies I have ever seen.!!!!!
186 people found this helpful

A.SperelliReviewed in the United States on November 10, 2017
5.0 out of 5 stars
The scary movie you've been looking for.
Verified purchase
I love scary movies, but I have to admit that it's often difficult to find really good ones. Either the acting sucks (or the actors are so "perfect" looking that it's painfully obvious I'm watching actors and not real people, or the plot is full of holes (or just plain nonsense), or the scares are predictable, etc...

This movie takes the tired "found footage" genre and does something absolutely ingenious with it. While there might be some minor aspects that are hard to believe this does not detract from how f*** scary this movie is. Rarely am I actually scared throughout a movie; at best, most good scary movies manage to get me here and there. Once this movie really gets started, it does not let go.

The actors are unknown, but somehow they manage to do such an amazing job that as I was watching it was really easy to forget I was watching a movie; it genuinely felt like I was watching found footage of real people. Their dialogue felt authentic and spontaneous.

If you are looking for a genuinely creepy movie give this one a try. You won't be disappointed.

Seattle guyReviewed in the United States on June 25, 2018
4.0 out of 5 stars
Great movie with some awesome scares, but story-wise, it's a frustrating flick.
Verified purchase
I found the movie to be very scary and creepy. That part was VERY well done. The twist at the end was also pretty great and exciting. But at the same time, the ending frustrated me too much. I get wanting to keep things from the audience, but keeping everything? What did Mac tell Tony that made him stay, despite the creepy thing with the clowns? "Mac's right. I gotta stay," he says... but they never tell the audience why?! It's so frustrating!! And when we finally get footage of what went on in the basement, it's all distorted and shaky cam, so again nothing is explained. I love a movie that creeps me out, but I also want to be given some answers, you know? I don't need to know everything. I am a firm believer that less shown in a horror movie is better because your mind fills in the blanks much more horrifically, but even Psycho explained what happened. I watched the whole movie and I still don't know what went down in the basement, why Mac felt it was best to stay (other than they needed his head cam for more footage, so plot device only???). That drives me crazy! I've read that a sequel is in the works, and maybe more will be explained. There's also the director's cut DVD with bonus footage and I'm tempted to buy that, but at the same time, I'm worried that even the bonus footage won't say much and just leave me more frustrated. This would have been a full 5 stars if I hadn't felt so frustrated as the credits started rolling.
65 people found this helpful

Harlan, artistReviewed in the United States on October 26, 2018
1.0 out of 5 stars
If they removed all the swearing the movie would be 30 minutes and even that's too long.
Verified purchase
Stupid from start to finish. Given the rating that I could see via my Roku, I thought perhaps it would be better than I would expect a "Blair Witch" type rip-off might be. If I had been able to check the ratings here on Amazon first, I wouldn't have wasted my time.
All the "found video" looks fake and staged because it is. There isn't even one part that is sympathetic. It just doesn't bode well when there is no one to like or care about.
The set looks completely improbable. I believe it was meant to be a mansion that was turned into a hotel, but it looks more like the back lot warehouse of sets pushed together without any logical sense. Hallways are narrower than you might find on a cheap yacht. All the restaurant equipment in the kitchen is clean even after years of being an abandoned building. There also appears to be too much restaurant equipment for the small size of the dining room.
Not a scare in the entire movie. Not one. Not even the expectation of one. Yawn!
34 people found this helpful

PBocciaReviewed in the United States on June 18, 2018
5.0 out of 5 stars
A Very Good Find!
Verified purchase
I'd had Hell House on my watchlist for quite some time but kept skipping over it, thinking that it was probably another found footage knockoff with a half-baked plot and a home-made look. Yesterday, I finally decided to give it a shot and was very pleasantly surprised. It starts out a little slow but feeds you enough information to draw you further in and then hits you with a "Tour-Goer" YouTube video that smacks you hard and leaves you needing to know more. The lead up to the actual event in the YouTube video, where the team goes through the process of setting up the attraction, is a nice slow burn with some creepy background things going on unbeknownst to the actor. These occurrences become more frequent and intense and the team itself starts to question why they're there and they start to come apart at the seams. It's maddeningly intense because you don't get to really see what it was that caused the panic seen in the initial video or what it was that caused the fatalities...it gives you just enough to make you wonder and leaves it to your imagination, which is a perfect way to go. Also, I thought the chemistry between the main actors was very good. They played off of each other well and their acting, for the most part, was natural and not stilted or wooden. If you're a fan of the Found Footage genre, I would definitely recommend Hell House LLC. It might be one of the best I've seen.
40 people found this helpful

TropicalwolfReviewed in the United States on October 10, 2017
5.0 out of 5 stars
Maybe the Best of the Genre
Verified purchase
Probably one of the best "found footage" films made. This one certainly builds a great story on an interesting concept. Having watched the documentary Monsters Wanted prior to watching this, you can see how this film really got the "feel" right of what it takes to put on a real Halloween haunted attraction. The acting was on point for what was expected (actually better than expected). The scares were well paced. While a few "jump scares" were present, most were far more subtle and you really had to be paying attention to pick up on them. This made the film much better (relying only on jump scares is cheap). Overall a solid film for the autumn haunting season or anytime you are in the mood for some "found footage" greatness. Hopefully the team behind this one will bring us another offering with an equally solid cast. Highly recommended!
43 people found this helpful

Daniel AndersonReviewed in the United States on November 25, 2020
4.0 out of 5 stars
Found Footage Done Well
Verified purchase
I think this is an excellent entry into the found-footage genre of horror movies. Its premise is simple: something goes terribly wrong in a haunted house attraction at Halloween and documentary filmmakers are piecing together clues to try to figure out just what happened. I found the acting to be genuine and mostly believable, the omnipresent camera element is not as ridiculous in other movies, and the creep factor is established well using atmosphere, some light but necessary exposition, and well-designed unsettling imagery. The plot is pretty predictable, but the unfolding is fun to witness even if you've got everything more or less figured out in the first act. I enjoyed it a lot, and am excited to check out the other entries in the series. I haven't seen the original version, only this director's cut, so I can't speak to the changes. Overall, I found this movie to be well worth my time as a fan of the horror genre.
12 people found this helpful

JayReviewed in the United States on December 19, 2018
1.0 out of 5 stars
Kind of a mess plot-wise
Verified purchase
It's one of those found-footage movies that uses shaking camera and obscured views to avoid showing its shoestring budget and lack of direction, and the plot is very vague as to what the cast is facing/dealing with in a way that suggests the script notes said "spooky stuff". I didn't get the impression that the "mystery" was actually every fleshed out in development at all; part of the appeal of Blair Witch style horror is being able to piece together bits of explanation through the footage, and it doesn't feel like it was thought through that much.
On a side note, if one of my coworkers vanished for a day and we found him in the basement not responding to anyone, and then he spends the next day lying in bed not answering, I'd assume he had fallen down the steps and gotten some sort of brain trauma. These people seem unconcerned by their potentially-concussed friend, even when he's lying unresponsive in bed; and even if they don't think he's physically hurt he's at least got a noticeable mental breakdown and they're just like "what a dick". Also, a properly prepared haunted house should have emergency flood lights and there were way too many scenes of people wandering in near complete darkness when they should have been able to switch on emergency lighting.
20 people found this helpful
See all reviews
Back to top
Get to Know Us
Make Money with Us
Amazon Payment Products
Let Us Help You
EnglishChoose a language for shopping. United StatesChoose a country/region for shopping.
© 1996-2022, Amazon.com, Inc. or its affiliates