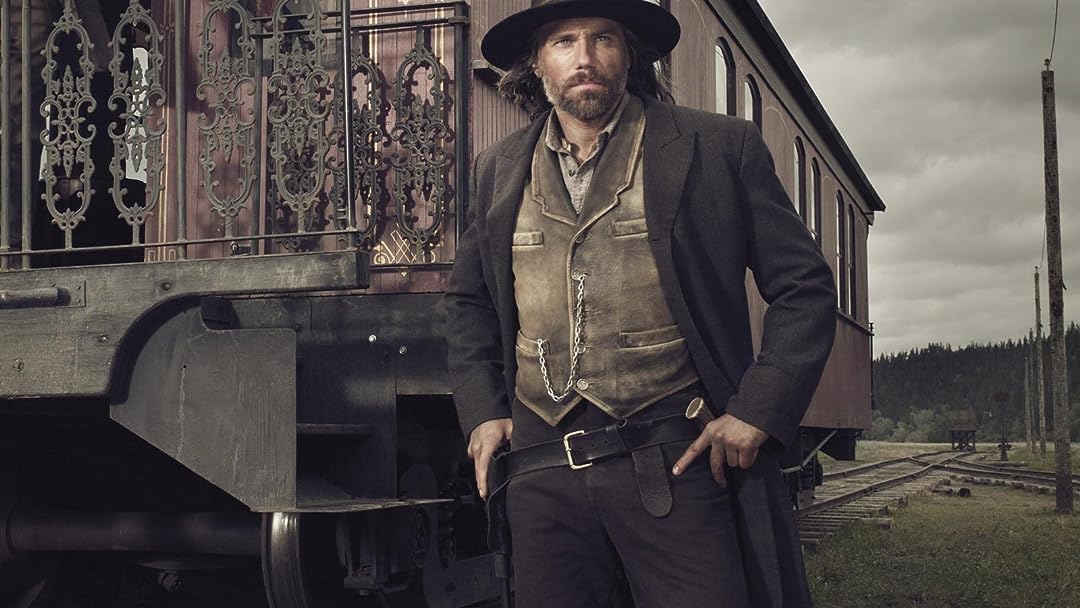 (2,014)
8.32012X-RayTV-14
Hell on Wheels tells the epic story of post-Civil War America, focusing on a Confederate Soldier, who sets out to exact revenge on the men who have murdered his wife.

Network
Entertainment One, AMC Plus Drama

QballrailReviewed in the United States on July 11, 2019
5.0 out of 5 stars
What A Ride!
Verified purchase
While not necessarily historically correct, Hell on Wheels gives us a glimpse into the past to an event that changed America forever. If you are a history buff, love trains, or looking for a good adventure, this is it. We watched this when it aired on A&E and eagerly awaited each episode. Rarely does anything attract my attention like that.

Character development was solid. Anson Mount played a seasoned, shrewd Civil War soldier struggling to find his place and those responsible for the death of his wife. Personally, I found him to be a likable character. Interesting, however, how he played both sides against the middle, so-to-speak.

Colm Meany was a shrewd businessman whom you loved to hate. While he performed his role well, I still think the part was more suited for a different actor. Still, he played a bad guy well.

The photography was really breathtaking in spots. You can appreciate this on a big screen. We have the benefit of a 65' 4K set and the scenery is phenomenal. The remastering to Blu-ray was done well, so this is no direct transfer from DVD as many shows and movies presented on BD tend to be. Although the shots of the trains were good, I do think they could have been a little better. I know, this isn't about the trains but the story surrounding the Continental Railroad.

I stated earlier that this is not entirely historically accurate. So, it is NOT a documentary series. I do not believe the writers intended to be historically accurate anyway. They wanted to tell the story their way. And they did it quite well. This is really entertaining and engrossing. Highly recommended.

Like Star Trek, this can be watched over and over again.

Ronald F. WebbReviewed in the United States on May 15, 2017
5.0 out of 5 stars
THE BEST FRONTIER-WESTERN SERIES EVER!!
Verified purchase
I am old enough to have grown up watching such great Western personalities as Tom Mix, Roy Rogers, Gene Autry, the Lone Ranger and of course, John Wayne. These characters were our heroes, the ones we kids emulated in our play and games. BUT I don't think I have EVER seen a better depiction of frontier characters than those depicted in Hell of Wheels. In addition to excellent characters, the writers managed to produce a five-season series that kept the viewer involved and in suspense through each episode from the first until the last. And the best thing of the series was that it depicted a continuous developing story through all five seasons that culminated in the last episode And like the old-time western movies, the villains got their just due, while the hero rode (sailed) away into the sunset!
15 people found this helpful

PJ WizReviewed in the United States on November 1, 2018
5.0 out of 5 stars
Excellent Series!
Verified purchase
Watched religiously when on AMC. Had to buy it. Based on historical facts and characters. Anson Mount (Bohannen) is great at the true Southerner thing (and I oughta know); accent, mannerisms, behavior and all!. Great story, too. Told in entertaining and captivating fashion. Bought all 5 seasons and would do it again. I own both DVD and digital formats. - One CAUTIONARY note ... race relations in 1865 were 150 yrs in the PAST... but are presented totally accurately FIR THAT POINT IN TIME, and ALL that that implies - including racial slurs and behaviors. Be aware. Could offend some.
6 people found this helpful

Christine Calabrese, Indie AuthorReviewed in the United States on October 5, 2021
3.0 out of 5 stars
Good series.
Verified purchase
This is a great series but I didn't like the first 7 shows. It took me a while to get interested in this series. Still watchIng. Tell the writers to LIGHTEN UP and make some funny characters, jokes, whatever. THIS is NOT like LONGMIRE, I do not know why this comparison was made. Longmire was excellent from the first to the last show. This takes a while. The star is very handsome great shots of his facial expressions, but again, a nice series that needs to be LIGHTENED UP! What is wrong with these writers? You have to have serious and comedy!

S. WilliamsonReviewed in the United States on October 4, 2012
5.0 out of 5 stars
Great new historical docudrama
Verified purchase
"Hell on Wheels," I discovered this progrm quite by accident, its title seduced me into to watching the 1st episode in the 2nd season. I was so enthralled by the storyline, the characters, and the setting. The producers and art directors have spared no expense to get the background as authentic as possible, you can almost smell the stench of pig troughs, etc.

Because the 1st episode of the second season was so good,I decided I had to fill in the missing information by ordering the first season on DVD, so I set up the second season to record on my DVR and ordered this set. Lucky for my wife and I, it arrived within 7 days. The set consists of 3 DVD's, 2 with 4 episodes and 1 with 2 episodes. The nice thing about watching the DVD's is NO COMMERCIALS, loved it. Since my wife and I are both retired, we were able to view the complete set in three days.

If you like historical docudrama, this story deals with the building of the Westbound leg of the trancontinental railroad from 1863 to 1869. It's great.
11 people found this helpful

Nicholas AzzilonnaReviewed in the United States on May 14, 2012
4.0 out of 5 stars
A Western done correctly.
Verified purchase
This show follows the journey of Cullen Bohannan (Anson Mount) a former confederate soldier who joins the Union Pacific Railroad looking for work and vengeance against the Union Soldiers who murdered his family. This show has everything a realistic western that takes place on a rail road would need. It has blood thirsty indians,alchoholics,gun fights, hardships, and loss of loved ones. This show opens with a Union soldier walking into a church confessional and confessing his sins to a priest, he discusses the horrible things that he has done, this is when the soldier is gunned down by the priest who is revealed to be Cullen Bohannan. Cullen then calmley walks out of the church and is on the train headed for 'Hell on Wheels' (yes those towns were actually referred to as Hell on Wheels). We also see that a young couple is also working for the railroad and finishing surveys, this couple Robert and Lilly Bell, discuss the dangers of heading into Cheyenne territory and it would be best for Lilly to return home to safety. Lilly refuses to leave her ailing husband behind. The next morning Lilly and Robert awake to find their camp under attack by the Cheyenne indians, Robert and Lilly amke their escape but are confronted by an indian. During the gruesome battle Robert is killed by the indian, who then tries to kill Lilly but Lilly kills the indian with an arrow she pulls from her shoulder, and quickly makes her escape with Robert's maps. The episode continues following Cullen Bohannan, who is made walking boss of one of the many negro cut crews, Cullen befriends Daniel Johnson (Ted Levine) who is the foreman of Hell on Wheels. After many drinks at the bar Johnson reveals to have done very bad things during the war, while Cullen questions Johnson, Johnson reveals that he knows why Cullen is questioning him and admits to taking part is his wifes murder. Johnson tells Cullen that the sergeant who also was involved in the murder is still in camp. Before Cullen can get the name Johnson is killed by one of the cut crew members.

While I watched this whole seires I just could not look away, my eyes werepractically glued to the tv. They pull all of the correct stops here, even going out of their way to make the Hell on Wheels camp look as authentic as possible and showing the conditions people lived in for the time. We get a great look at the casts background and motivations for joining the railroad and can even relate to the characters. If you love westerns then you will love this show.
2 people found this helpful

Paul F. BrooksReviewed in the United States on September 13, 2013
4.0 out of 5 stars
Very entertaining fictional account of nomadic towns that sprang up and accompanied the construction of the nations railroads.
Verified purchase
Hell On Wheels - The Complete First Season (2011)

I stumbled upon this show by complete accident not being a regular TV viewer. I saw the title featured on Amazon and recalled seeing that term used in the book "Nothing Like It in the World", Stephen Ambrose's history of the trans-continental railroad. The term described the nomadic towns that sprang up and accompanied the construction of the nations railroads. I impulsively purchased the First Season and submit the following observations.

I was very impressed with the sets, location and, of course, the rolling stock - trains. Having resided in the mid-west for several years - Minnesota - the Canadian prairies looked very authentic to me.

From my reading the rail towns were, in fact, lawless and vice was rampant. The survivors of the Civil War, both Union and Confederates were attracted to the wide-open lifestyle. Outward expressions of racial and ethnic enmity was part of the then American culture. Of course dramatic liberties were taken but the basic social interactions portrayed reflect, I believe, the situations, as they actually existed.

The actors were unknown to this viewer but were memorable for their roles particularly "The Swede" and Joseph Black Moon.

One real attractive aspect of the box set are the behind the scenes documentaries that are included. One fact that impressed me no end was that the locomotive used in Season One was made out of wood!

I just purchased Season 2 so you know I'll give this series a good rating!
3 people found this helpful

Mary AnnReviewed in the United States on December 8, 2021
5.0 out of 5 stars
Exciting drama
Verified purchase
This was very exciting. Acting excellent. Production values were very high creating a very realistic view of the creation of the Transcontinental railway. There were two things I did not like - they killed off two of my favorite characters and, sad to say, I did not care for the ending - I do not think that was realistic at all
See all reviews
Back to top
Get to Know Us
Make Money with Us
Amazon Payment Products
Let Us Help You
EnglishChoose a language for shopping. United StatesChoose a country/region for shopping.
© 1996-2022, Amazon.com, Inc. or its affiliates