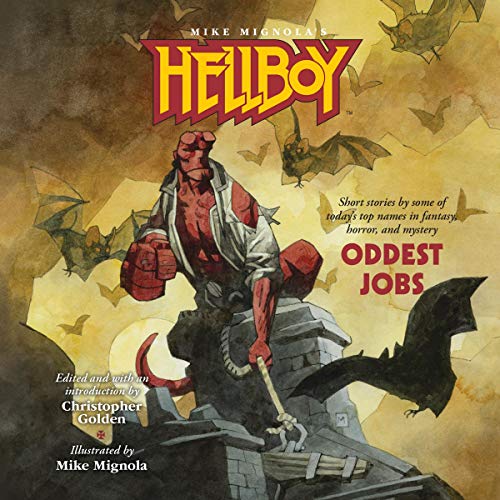 Some of the biggest names in horror, mystery, and fantasy come together to pay homage to Mike Mignola's Hellboy!

4.5 out of 5 stars
4.5 out of 5
30 global ratings
How are ratings calculated?
To calculate the overall star rating and percentage breakdown by star, we don’t use a simple average. Instead, our system considers things like how recent a review is and if the reviewer bought the item on Amazon. It also analyzes reviews to verify trustworthiness.
Top reviews

scramble
3.0 out of 5 stars not what I expected
Reviewed in the United States on December 24, 2014
Verified Purchase
Perhaps I did not read the description of this product as carefully as I should before ordering this item but this turned out to be a collection of short stories by other authors rather than a collection of stories from Hellboy graphic novels. The description said the volume was illustrated by Mike Mignola but the illustrations are limited to one print at the start of each story and due to differences in the quality of paper between this volume and the Hellboy graphic novels, the illustrations do not the same pop as readers of the graphic novels might expect.
Read more
One person found this helpful
Helpful
Report abuse

Rob Knotts
2.0 out of 5 stars Bottom of the barrel.
Reviewed in the United States on December 3, 2016
Verified Purchase
"Odder Jobs" was a nice followup to the first "Odd", but this collection is big disappointment compared to either of those. Unfortunately this collection really does read like all the stories that were rejected from the first two collections.
Read more
Helpful
Report abuse

Buck60
5.0 out of 5 stars Another really good Hellboy
Reviewed in the United States on April 26, 2015
Verified Purchase
If your a Hellboy fan, you need to read this. It is just some more really good adventures.
Read more
Helpful
Report abuse

xrayguy
4.0 out of 5 stars Good read
Reviewed in the United States on February 4, 2013
Verified Purchase
If youre a fan of the works, you will need this to complete the collection. Good stories, lots of fun, but keep in mind, different authors means uneven work sometimes.
Read more
Helpful
Report abuse

Surferofromantica
4.0 out of 5 stars About half of the stories are pretty good, but the previous collection has better stories - nothing essential here
Reviewed in the United States on February 23, 2014
Another decent collection of Hellboy stories, although nothing really outstanding this time. In the introduction, Christopher Golden confesses what a geek he is, then we get into the star piece, “Jiving With Shadows And Dragons And Long, Black Trains”, a very weird short story, kind of like Hellboy meets Rango, that extremely strange Gore Verbinski animated piece. Yeah! Obsidian demon warriors of the dreams and lots of chum. LOTS of chum. “Straight, No Chaser” is kind of a funky jazzy piece about ghosts, ghouls, with that sort of Mos Eisley cantina vibe (”You will never find a more wretched hive of scum and villainy.”). Something about Robert Johnson in there too – yeah! “Second Honeymoon” is some sort of strange Percy Jackson-type tale of Typhon and the Titans. “Danny Boy” is a cool little story about a young Irish kid in the US who becomes involved in a bank robbery… sorta. Hellboy comes into the picture too, which is when things start to get cosmic… “Strange Fishing In The Western Highlands” is a very cool little tale that seems to come directly from the pages of Mike Mignola’s Hellboy comics, and tells a story from the POV of a young doctor, who travels to visit his father’s rural highlands home, and comes across a BPRD operation – turns out that his father is a druid! And some day he will be too!! Some action involving Soviet necromancers, nothing special – but the telling of the tale is awesome! Great quotes here:

“Hellboy is a fine young man,” replied my father stiffly. “Just think of him as having a different background. Like a Gurkha or a chap from Africa. I met him in Malaya during the Emergency, got a lot of respect for the fellow.”
“He’s not a Gurkha,” I protested weakly. “He’s got a tail, and he’s red-”

“Salamander Blues” involves pancakes. It’s also about abducted frog creature eggs, and making peace with the other forces. Nice little tale. “The Thursday Men” is a silly little tale about dimensions intersecting with ours, and the trouble that inter-dimensional aliens can cause us, even when they don’t mean to. “Produce” is a very short, very strange tale about a kitten in a supermarket. Wow! “Repossession” is a spooky story about demon catching in Egypt and Mali – and we’re off to Timbuktu. Nice one. “In Cupboards And Bookends” is a freaky story involving the Reverend, that includes demons sheltering shattered child spirits. Spooky. Great quotes here too:

“Are you laughing at me, rise?”
“No, great boy, I am laughing near you. You ought to try joining in sometime.”
“Only if there will be pancakes later.”

Oh yeah… pamcakes again! There are other nice quotes too, like: “The BPRD chopper lifted off from a field one mile east of the Heath airport. Hellboy stood in the field, waved until the chopper was high enough, and then waved at the pilot. He never understood why he loved doing that so much, but he did, and what did it hurt?” (Sort of a M*A*S*H moment here) The story also has a Cheech And Chong reference (”Dave’s not here”), and it is in this story we also learn that Hellboy is afraid of ponies! That’s just wrong!!

“Feet Of Sciron” is an odd story about a rival BPRD, a phantom planet, the hollow earth, and ways in which our legends intersect with reality. Wow! “Monster Boy” is about a kid who loves monster movies, the old ones, and who has trouble with his parents, and the kids at school… but not after he spots Hellboy fighting a ghoul one night, well after midnight. Nice. And a very unique tale indeed, as Hellboy hardly appears in it! “Evolution And Hellhole Canyon” is a freaky tale of Hellboy’s adventures in the desert. “A Room Of One’s Own” goes on about literary endeavors, like the “Yellow Wallpaper”, and “The Curtains”. The title is a reference to Virginia Woolf… nice thought… but silly story.
Read more
One person found this helpful
Helpful
Report abuse
See all reviews