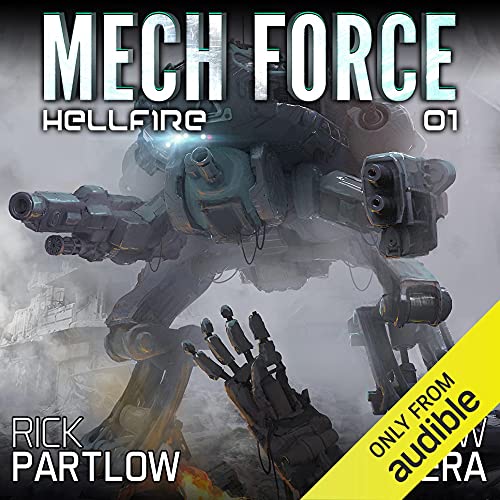 Nathan Stout was born to save the world.

Cloned from the genes of heroes past, tossed aside when the Army abandoned the program, Nate has seized his own destiny. Forming the Broken Arrow Mercenary Force, he leads a team of hired guns piloting cutting-edge mechs in a last-ditch effort to restore a United States he never knew.

America is under siege by the Russians and Chinese, its major cities devastated by nuclear terrorism. The Army has retreated, the politicians have abandoned the east coast, and the only thing standing in the way of total devastation is a handful of mercenaries.

But unseen forces are guiding the battles he fights, steering him toward a fate he never imagined, determined to end his dream of a reunited America. Can Nathan Stout’s mech force survive the machinations leading the world toward the hellfires of endless war?

Experience the start of an explosive series from the bestselling author of Drop Trooper. Mechs. Warfare. Intrigue. This is Military Sci Fi the way it's supposed to be.

4.1 out of 5 stars
4.1 out of 5
90 global ratings
How are ratings calculated?
To calculate the overall star rating and percentage breakdown by star, we don’t use a simple average. Instead, our system considers things like how recent a review is and if the reviewer bought the item on Amazon. It also analyzes reviews to verify trustworthiness.
Top reviews

Caldersky
3.0 out of 5 stars Takes a bit to get into
Reviewed in the United States on October 20, 2021
Verified Purchase
It was a little confusing, like it was the 2nd book of the series. Usually I know pretty quickly if I’m going to like a book, this was a slow warmer for me. Will probably get the next one.
Read more
One person found this helpful
Helpful
Report abuse

JustAnotherOpinion
2.0 out of 5 stars Slow and Boring.
Reviewed in the United States on November 8, 2021
Verified Purchase
Other than the prologue, it takes the rest of the book to get this story off the ground. NOT Mr. Paltrow's normal page turner, it is very slow to start and doesn't really get much better. Perhaps it's the additional author or the collaboration but it did NOT work for me.
Book/Series NOT Recommended.
Just My Opinion, YMMV!
Read more
Helpful
Report abuse

Jay F. Harrell
5.0 out of 5 stars Great novel!
Reviewed in the United States on October 21, 2021
Verified Purchase
I am always hesitant to be the first to try a new author but I am so glad I did with this one. Great character development and unique storyline. I really enjoyed it!
Read more
2 people found this helpful
Helpful
Report abuse

BRAD BRISTOW
4.0 out of 5 stars Retitled
Reviewed in the United States on October 20, 2021
Verified Purchase
Released under the title BAMF in 2019. I enjoyed the book.
Read more
3 people found this helpful
Helpful
Report abuse

Ian Denner
2.0 out of 5 stars Weird
Reviewed in the United States on November 20, 2021
Verified Purchase
I would have loved ore of the backstory right at the beginning of the book. No matter how hard I try but when a book starts as confusing a this one did I lose interest really quickly.
Read more
Helpful
Report abuse

Gil T
4.0 out of 5 stars War and Mechs and Clones, oh my
Reviewed in the United States on November 1, 2021
Waking up with a killer headache with alarms going off, is not a good start to the day. His memory is a little off, but throws on some clothes, but something is definitely not right. Where is everyone? Nate rushes into the hall way from his room and see fires, dead bodies and things are looking bad. No one seems to be left alive. Bodies are all over the place. The mech hanger is torn apart, explosions and fire everywhere. One mech is left standing, the rest in shrapnel. Before the last standing mech, Nate’s friend, Bob is dead at the mech’s foot eternally reaching out for it. He is on his own.

He starts up the process to get the mech to come to life. No time for all the diagnostic checks. As he exits the hanger, he sees man and unmanned mechs outside attacking the base. He shoots one as he surprises them and takes it out. The others turn towards him. It isn’t the Russians, who is it? Mercs? That doesn’t matter now, he needs to survive this and can think about it later. He goes about clearing base or doing what he can. Infantry is coming through the gates. And then the missiles hit him. Fire and pain and then darkness..

Fast forward…a nuke took out parts of the US, the government is gone. He only had the memories deemed useful. One of his team had met Nate ‘Prime’, but the rest aren’t aware.
The author does a great job on world building and throwing you into the action at the beginning of the book. It is a quick book, but definitely worth it.
Read more
One person found this helpful
Helpful
Report abuse

Mindjacked
5.0 out of 5 stars great new series
Reviewed in the United States on October 25, 2021
When you take military heroes and clone the genes needed for their use in mechs (war machines) but than close down the program what do you do with the ones left? You let them do what they do best fight, especially when it is Russia and China who have taken over the east coast of America and these warriors are all that stands in the way of their advances.

This is the start of a wonderful series and I hope I get to hear more of it as narrator James Patrick Cronin did a awesome job, his voice grabbed me and put me there on the sidelines watching as all of this takes place. This book is full of non stop action and suspense. There are also some twists that will have you up reading/listening past your bedtime. This book is a really good futuristic military book and I can't wait for the next one.
Read more
Helpful
Report abuse

John
4.0 out of 5 stars An ok read
Reviewed in the United Kingdom on November 24, 2021
Verified Purchase
An ok read for me. It's not that bad I did not finish the book. I just found it was like I was constantly reading a description about something and the actual story would start next. I got the main idea of the story I think but not to sure, you get the idea there is a story running in the background and that took away from the story you where trying to rap your head around.
Well if you read that then you get the idea what the book was like for me
Read more
Report abuse

Gryphon
2.0 out of 5 stars Not as good as the work normally produced by Rick
Reviewed in the United Kingdom on October 28, 2021
Verified Purchase
I’m not sure about this storyline. It’s taken the whole book to even start to get going and I actually struggled to stay with it. Not sure I would bother with the next part, but as I get it free with Prime then I might give it a chance.

This book definitely lacks the pace and pitch that Rick Partlow’s other works have.

Oh, and it needs proof reading properly. Too many typos.
Read more
Report abuse
See all reviews
Back to top
Get to Know Us
Make Money with Us
Amazon Payment Products
Let Us Help You
EnglishChoose a language for shopping. United StatesChoose a country/region for shopping.
© 1996-2021, Amazon.com, Inc. or its affiliates