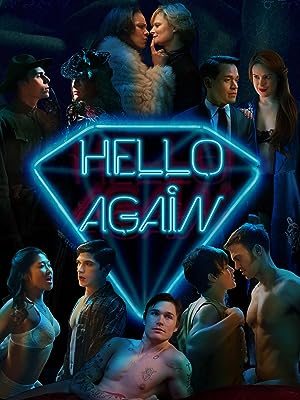 (1,037)
5.21 h 46 min201818+
Based on the acclaimed Off-Broadway musical, HELLO AGAIN chases ten lost souls across ten New York City eras. The lives of a restless soldier, a defiant nurse, a helpless college boy, a driven actress, and more intersect in this daisy-chained exploration of bittersweet love.

Included with BroadwayHD on Amazon for $8.99/month after trial

Watch with BroadwayHD
Start your 7-day free trial
Add to
Watchlist
By ordering or viewing, you agree to our Terms. Sold by Amazon.com Services LLC.
Write review

D. PflasterReviewed in the United States on October 7, 2018
5.0 out of 5 stars
A real movie musical.
Verified purchase
I loved this movie; they expanded the original musical to a movie in really interesting ways that made sense for the screen, the cinematography is gorgeous, and the acting and singing is great. I think it's hilarious that most of the reviews on here are for the 1987 Shelly Long film (which is also fun, but completely different).
19 people found this helpful

Karen TyrellReviewed in the United States on May 28, 2020
4.0 out of 5 stars
For Shelley Long Fans, This Film Is A Treat
Verified purchase
I didn’t think Lucy was a klutz. She only had physical mishaps when she was nervous or in a situation where she felt out of her element. The depiction of high society people in all their snobbery and shallowness was spot on. If they don’t thinking you’re “somebody” or “important,” they will treat the person as if they’re invisible.

I loved the scenes when Zelda was in the cemetery doing her working to bring Lucy back. It was hilarious. When Zelda met Hastings Jr, they glowed, which was nice to see. She didn’t care about his billions; she liked him for himself and his personality. She shook his butler’s hand as she walked into the house. That was terrific, because a lot of people treat butlers in a rude manner.

The scenes where Lucy and Zelda crashed the party was fun. It revealed Kim as greedy, a liar and exposed her as being vulnerable. It was great to hear her admit she lied about Lucy and told the truth about her returning. I wished the cake had fallen on Jason, because he was a jerk.

Simone BittleReviewed in the United States on September 14, 2021
5.0 out of 5 stars
Very good movie
Verified purchase
Love Shelly Long in these 3 movies I purchased very funny, I had them on VHS and wanted to get dvd, I have The Money pit(with Tom Hanks), Hello Again, Outrageous fortune and Troop Beverly Hills all great movies.
One person found this helpful

Robbie JenningsReviewed in the United States on October 3, 2019
5.0 out of 5 stars
Shelley Long is a force of comedic nature
Verified purchase
So long overdue! Shelley Long is pure brilliance in Hello Again. You’ll laugh until you hurt. By the end of the movie she’ll have you scrambling to find more of her movies ... I recommend Troop Beverly Hills and Outrageous Fortune
5 people found this helpful

RyanReviewed in the United States on April 3, 2020
5.0 out of 5 stars
Absolutely love this movie!
Verified purchase
Definitely one of my favorite musicals currently along with the soundtrack. While it can be kind of confusing since it hops into different decades without real reason. It flows perfectly with the emotions and songs carrying you through. Everyone does a great job.
One person found this helpful

warrenReviewed in the United States on October 10, 2021
3.0 out of 5 stars
shudda seen it on the great white way
Verified purchase
as a performance on dvd it just didn't play. lots of talent, but little substance in performance. the words and lyrics were, are, not memorable or heartbreaking, funny or cleaver . we needed some cole porter, some Sondheim and heart and soul. won't watch it again.

Neil SReviewed in the United States on October 18, 2021
5.0 out of 5 stars
Enjoyable movie the bring a smile to your heart!
Verified purchase
I have watched this movie with my mother since I was a young girl! We can watch it over and over and still find it just as enjoyable as it was years ago!! Thank you Lucy and Zelda!!

Rye BreadReviewed in the United States on May 30, 2019
5.0 out of 5 stars
Don't eat the chicken balls!
Verified purchase
I've loved this movie since I was a little girl. The humor has held up well, and I now love it as an adult. Sure, it's a little campy, but that's what makes this movie great.
2 people found this helpful
See all reviews
Back to top
Get to Know Us
Make Money with Us
Amazon Payment Products
Let Us Help You
EnglishChoose a language for shopping. United StatesChoose a country/region for shopping.
© 1996-2021, Amazon.com, Inc. or its affiliates