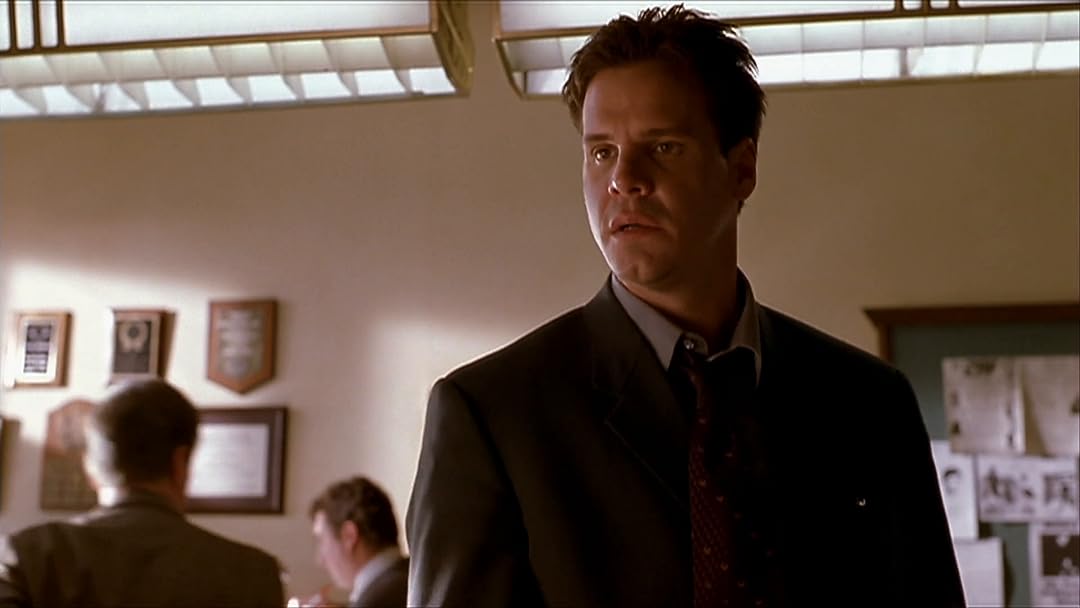 (731)
5.41 h 39 min2000X-RayR
HD. A dirty cop runs afoul of Pinhead and his otherworldly Cenobites after finding a mysterious puzzle box at the scene of a murder.

MichaelReviewed in the United States on August 26, 2013
4.0 out of 5 stars
"You have . . . allowed your flesh to consume your spirit"
Verified purchase
In 2000, the "Hellraiser" series made the direct-to-video transition following the disappointing commercial performance of [[ASIN:B004P7CMPK Bloodline]]. This may have been cause for many fans to grieve, and sure enough, "Inferno" doesn't seem to be among the more popular additions to the series, but personally, I consider this entry to be a revival for the franchise. However briefly, "Inferno" returns the series to a pure horror standard by abandoning the sci-fi blend of the last two features. While the trademark gore has been toned down, you're still looking at a violent, scary movie here.

The story: Corrupt detective Joseph Thorne (Craig Sheffer, [[ASIN:0767836359 A River Runs Through It]]) sees the sleazy, cushy life he's created for himself turn into a nightmare when a brutal crime scene leads him to the Lament Configuration - opening the door to a mind-bending case regarding a mysterious "Engineer" and terrifying apparitions.

"Inferno" is a stand-alone story in the "Hellraiser" universe: it's the first movie which neither follows the plot laid in the original film nor attempts to significantly develop any existing character. The movie plays from the protagonist's perspective, hardly referencing any past canon and making every new discovery about the Cenobites scarier. What I love most about this is that it throws a new shroud of mystery over Pinhead & Co.: after seeing the Cenobites thoroughly deconstructed in the last two movies, it's great to have them presented as enigmatic monsters again.

Director Scott Derrickson would eventually find mainstream success with movies like [[ASIN:B00AJLHUA8 Sinister]], but he shows off his ability to create a very chilling atmosphere in the low-budget realm. Personally, I think this is the most frightening of the series since the first movie. There are some moments which disengage you - the CGI inserts are noticeably dated, and there's a totally incomprehensible scene wherein Thorne is accosted and beaten up by two karate cowboys - but by and large, a consistent mood of dread and foreboding persists. The scares themselves exist within this mood: there are very few jump-shocks, and most of the truly scary moments come from the creepy imagery (e.g. the old man in the wheelchair) and the macabre revelations (e.g. the mattress). There's a definite [[ASIN:B003TRMLQM Jacob's Ladder]] influence, here.

"Inferno" is one of only a handful of movies I've seen use audio to convey its most brutal scenes. There are three instances wherein a Cenobite (Ray Miceli) tortures his victims to death off-screen, and I'll admit to needing to mute the DVD for those parts. Fair enough, this isn't an even trade-off for the almost artful bloodletting seen in the past flicks, but there's still some of that to be seen and I like to think that it makes an impression. The initial scene featuring the female Cenobites is relatively stomach-churning.

The acting is pretty good. Craig Sheffer plays his role better and better the most anxious the character gets, and James Remar ([[ASIN:B005LAIIJY Django Unchained]]) has a few atmospheric scenes as a psychiatrist-priest. Doug Bradley's Pinhead speeches steal the show.

You must decide for yourself whether you want to watch this one. Fans of the originals can let it be and not worry about missing any pertinent story bits, but general horror fans can hop right in. Despite my squeamishness, I like it a lot and would recommend it to viewers looking for a chill.

MelkorReviewed in the United States on July 24, 2002
4.0 out of 5 stars
Surprisingly Good For Straight To Video
Verified purchase
It took me over a year to watch this video after I bought it. The "direct to video" thing scared me off. I am a huge hellraiser fan; a Clive Barker fan in fact. I really enjoy the worlds he creates, and what other people have been able to do with his vision.
My favorite works of his have always been the Nightbreed and Hellraiser series. Back in the late 80's, Clive licensed out the creative right for Hellraiser to Epic Comics, and several up and coming writers (Mike Mignola, Neil Gaiman, etc.) would write fantastic short stories based on the Hellraiser rhelms. These stories would always have a demented twist or sense of irony along the lines of Twilight Zone or Creepshow.
That is what "Hellraiser: Inferno" reminds me of. A really good short story. An episode or Tales From the Darkside or Twilight Zone. I'll warn you now, you get only one or two minutes of Pinhead or any other cenobites; so if that's what you're after, you're bound to be disappointed. The Hellraiser story has always been about the box, and the effect it has on those who find it...or who it finds :)
I don't really get the "direct to video" sense of cheapness from this film. The film quality is fine, the acting in good (the main character is played by Craig Scheffer, who also played Boone in "Nightbreed"!), and the effects are gory enough for a Hellraiser movie. It was probably on a budget, but they worked well within those constraints to produce a pretty good movie.
One person found this helpful

Robyn B. McgormReviewed in the United States on March 31, 2013
5.0 out of 5 stars
Terror released
Verified purchase
With these heart stopping thrillers and chilling stories it makes you wonder how anyone can sleep. That little box is at it again releasing demons and creating havoc, Unless your hard core to these shows I wouldn't recommend them to others and not the younger ones for sure. This one is a must see for all Hellraiser fans so sit tight and let the horror put you in the grip of a world of blood lust through the eyes of the director and a great cast. Fantastic special effects that will have you in awe, waiting for your partner to hurry with the popcorn so you can snuggle up safe and sound. I rated this an A grade plus for a good night entertainment with lights out and see what happens next. No more hints that's enough so get a move on and go get it and be the judge for yourself, Storyline is marvelous so this will keep us content until the next chapter from Hellraiser .So try and relax and enjoy.
One person found this helpful

kevin G.Reviewed in the United States on March 14, 2020
4.0 out of 5 stars
Anything's better than 'Hell On Earth', amirite?!
Verified purchase
Pretty average, but I gave it a four-star rating because its different and not too bad. Don't expect many classic Hellraiser moments because it's a different outing.

I started falling asleep during the final chapter because the main character is a gritty and baritone-voiced jerk and we follow him the whole time and it's a bit insufferable, but maybe you'll love what you see. I didn't.

If you need some Horror to watch and cant find anything else or are a completionist - you wont regret watching this, but you likely never watch it again either.

Mr. MervoReviewed in the United States on October 30, 2015
4.0 out of 5 stars
Hellraiser Inferno: Japanese Bluray Review
Verified purchase
Pinhead returns in this sequel to the Hellraiser series. I didn’t think this was bad at all. I know some people hated this one, but I liked it. The story line was pretty good and the effects were well done. Some creepy moments, especially near the end. The scene with the old man riding by in the wheelchair still creeps me out to this day. The Japanese bluray is also very clear. Looks great in HD and sounds good too. You can also get this in a bluray set with Hellraiser Bloodline, Hellseeker, and Hellworld. Definitely recommend to Hellraiser fans.
One person found this helpful

adam borkeyReviewed in the United States on April 4, 2022
4.0 out of 5 stars
Surprisingly descent installment!
Verified purchase
Probably one of the better of the sequels of the franchise. Not great, but better than I expected!

MagusReviewed in the United States on February 25, 2006
4.0 out of 5 stars
A new start in the Hellraiser series
Verified purchase
Hellraiser Inferno starts with a detective who is being haunted by a serial killer called the Enginer. The Enginer is setting the detective up. We see the puzzle box earlier in the film, and there are a few clues the detective finds out while trying to prove his innocense.

This movie shows the Cynobites a little less than the 1st Hellraiser. Pinhead is only on there a few seconds himself, so this mainly focuses on the detective and his life. I still like the new focus of the main character finding out why his reality is coming apart slowly, then Pinhead just showing up killing so often; like parts 3-5.
One person found this helpful
See all reviews
Back to top
Get to Know Us
Make Money with Us
Amazon Payment Products
Let Us Help You
EnglishChoose a language for shopping. United StatesChoose a country/region for shopping.
© 1996-2022, Amazon.com, Inc. or its affiliates