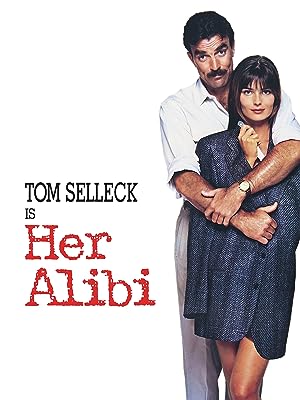 JakeReviewed in the United States on April 28, 2021
1.0 out of 5 stars
Oh Tom….why?
Verified purchase
Put Tom Selleck and a super model in a film and what do you get? Well…you get a terrible script.

The direction and editing is very good. But the actual words the actors read and repeated on film are hmmm….how shall I say? “wordy”

The screen writer seems to have read a good book then threw that book in the trash and substituted his own diarrhea smeared on paper.

Tom Selleck in all his Tom-ness eye brows and all was unable to bring meaning to the literal poo he was forced to recite.

I won’t say the script is bad. Because then you would believe this film had a script. It doesn’t. It has words repeated by actors. Those words are just complete garbage.

Greg JohnsonReviewed in the United States on July 10, 2014
4.0 out of 5 stars
Two stories intertwined
Verified purchase
If you're like me you will sort of giggle your way through this double feature trapped in one movie. I don't know how director Bruce Beresford pulled this off, but it works if you are light hearted enough to overlook some really silly moments. Written by Charlie Peters the movie is a novel idea. I admit it; part of the appeal of this film is both lead characters. They are such charmers you can't take your eyes off them. Phillip Blackwood (Selleck) the writer, is completely hypnotized by this remarkable Romanian beauty Nina (Porizkova). Blackwood sees her appearing before the judge as a murder suspect and Blackwood is browsing a courtroom for story ideas. He also sees her as a story that just might invigorate his sagging career. He gives her and the police an alibi and two complete strangers go to Connecticut to the Blackwood estate. I'll admit something else. Blackwood's mansion is a character in this story. It is so appealing it just gets into your bones. No sooner do they arrive when Nina starts showing these mysterious talents. Nina begins to get into Tom's heart. But he fears her also. After all she is a murder suspect and she shows him she is very good with a knife. As she pads around the house acting really athletic Phillp begins writing. So Blackwood is a narrator on the score for his novel of Peter Swift. As Nina acts so Phillip writes. Blackwood's novel of Peter Swift is really corny, macho, and bad and also very funny. A bad tale becomes good because of the humor in the film. Because two mysteries are moving along at the same time we get a new look at a movie. And of course love begins and a catchy mystery unfolds. But don't say I didn't warn you, this movie is horseplay at times but the overall effect is very good. There isn't much I would change about this movie and I don't have alot of needling cerebral insights. I like it the way it is. I highly recommend this movie if you want to watch a unique frolic, mystery, and love story.
13 people found this helpful

NickLReviewed in the United States on May 17, 2015
5.0 out of 5 stars
funny and delightful film that is hugely underrated and overlooked
Verified purchase
This review is for the new Warner Archive release of 'Her Alibi' (May 2015). This new release is not the same as the 'pan & scan' version released several years ago. This new Warner Archive release is rendered at 1:85 widescreen and it looks gorgeous.
This is a warm, funny and delightful film that is hugely underrated and overlooked. The Oscar-winning director, Bruce Beresford, has a light touch which worked for this movie. The cold-war politics are dated, but the love story works, Paulina is beautiful, and the self-deprecating mocking of the mystery writer at his craft is hilarious. The Warner Archive series is frankly over-priced, but they have published many deserving titles - like this one. If you already have the old 4:3 release copy, you won't be disappointed by this new version.
14 people found this helpful

AbbyReviewed in the United States on May 1, 2021
1.0 out of 5 stars
Original plot but executed terribly
Verified purchase
The basic plot was original and seemed interesting. It could have made a promising film. Unfortunately it was utterly ruined. The acting is great but it takes more than a few stars to make a movie good. The dialog is stilted, the flow is disorganized, the narration is cringe worthy, the plot twist and final showdown feel contrived, the story line is undeveloped, and the humor is juvenile. It feels like the entire film exists for the purpose of making raunchy chauvinistic jokes about Paulina Porizkova's body. I wish I hadn't wasted my money on it. May you never make the same mistake that I did.

Family friendly? Not so much, it is rated PG-13 for a reason. Some cussing, plus there are two scenes which show woman's nipples. At one point an agent is taking pictures in a home they are investigating and sees a Playboy, so he takes pictures of it. It's thrown in to be humorous but its not appropriate for children. Also when the main character comes out of the pool, her nipples are exposed when her shirt comes down. It's brief, but still there. I wouldnt watch it with children.
9 people found this helpful

DRHimesReviewed in the United States on January 8, 2020
5.0 out of 5 stars
A little different from he reg movies
Verified purchase
This is like in the middle of Magnum P I, an He's cop series. A writer is dryed up with thoughts. Helps an woman looking at a long Jail time. An from that he's life becomes the book he is writing.
One person found this helpful

G. B. B.Reviewed in the United States on August 17, 2020
5.0 out of 5 stars
Solid movie
Verified purchase
I think they could have done some parts better, like the poison scene, but over all, it was a solid movie. Tom did a good job. I like to write, so it was fun to see another writer struggle in getting the word on paper, and see all the pitfalls he ended up in as he did it.

CMMReviewed in the United States on April 8, 2021
5.0 out of 5 stars
One of our favorites!
Verified purchase
Tom Selleck is very funny in this murder mystery. We watch it every 6 mos or so. We appreciate that it is a light hearted, romantic type murder mystery with NO BLOOD or GORE. Definitely worth watching more than once.
See all reviews
Back to top
Get to Know Us
Make Money with Us
Amazon Payment Products
Let Us Help You
EnglishChoose a language for shopping. United StatesChoose a country/region for shopping.
© 1996-2021, Amazon.com, Inc. or its affiliates