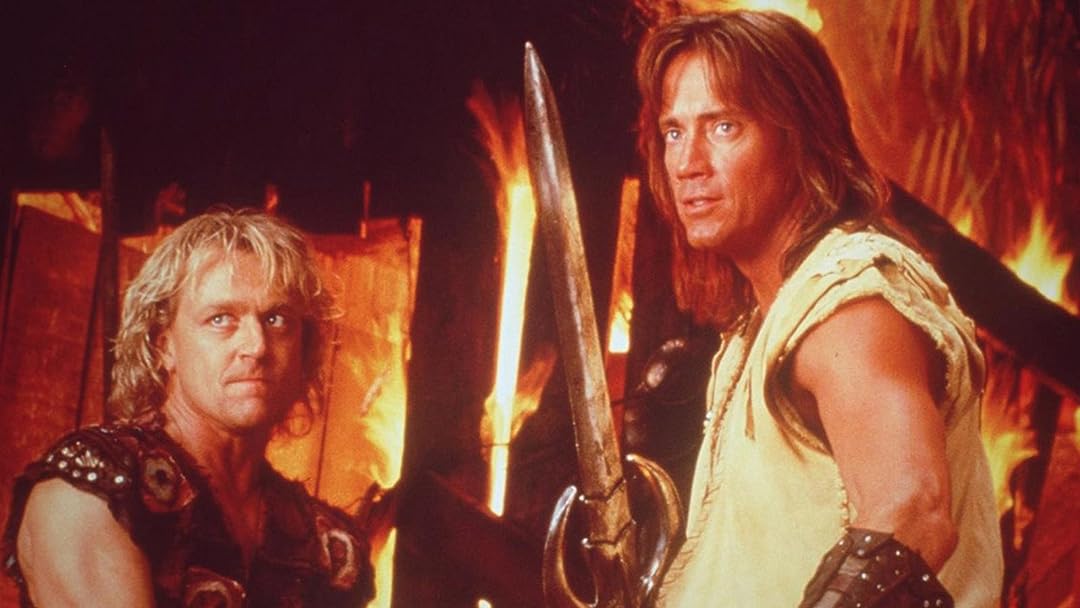 Season 1
(970)
6.41995ALL
Hercules: The Legendary Journeys, the hit series starring Kevin Sorbo as a 90's version of the mythical demigod, with its trademark blend of high action and lighthearted humor single-handedly revitalized the fantasy-action genre on television. Sorbo, a strapping Minnesotan with the physique of a decathlete and a ready sense of humor, won the hearts of audiences around the world with this powerful "good guy" portrayal of the legendary hero

Siscero Reviewed in the United States on April 14, 2018
5.0 out of 5 stars
Disappointed that there’s only season 1 offered!
Verified purchase
I am terribly disappointed that Amazon has only the first season of Hercules the Legendary Journeys! I remember watching this series when I was younger, and I really liked it. I thoroughly enjoyed watching the first season again. It took me back to that much simpler time in my life. Now I want to see more. And I really don’t mind purchasing the whole seasons, but Amazon has to offer them first.
37 people found this helpful

AncientDiscoveryReviewed in the United States on February 12, 2022
5.0 out of 5 stars
When Television was Fun and Adventurous
Verified purchase
I hadn't watched this when it first came out. It was the golden age of syndicated television, and would set the stage for the coming fantasy genre revolution. In fact, many of the people who worked on Hercules would go on to work on Lord of the Rings, Narnia, then back to television with Legend of the Seeker.

Hercules, even in its day, was a throwback to fun, weekly adventures. A bit campy, and not always concerned with continuous or serious storylines, yet it was an enjoyable escape. In our era, where every show doesn't know how to be anything but dark, dreary and overly mature, it is no wonder people are still watching Hercules nearly thirty years after it premiered.

Keep an eye out for early appearances of now familiar stars, or the habit of recasting the same actors in different roles. You'll see the introduction of Xena in three episodes in the first season, though not in great detail (her character wasn't originally meant to survive). She would get her own show in the same universe, though all her circus flipping through the air and other stuff made things too silly at times.

Sure, the special effects sometimes show their age, but they managed to accomplish a lot on a tv budget (and these are the people who would eventually do the f/x for Lord of the Rings). The set designers and costumers built a convincing world (though many interesting costume choices). Features a culturally diverse cast that was certainly not historic for ancient Greece, yet felt organic and not forced (and they did it long before anyone else).

It's funny how many adults say they watched this when they were kids. Not really for young kids, yet it didn't go overboard with adult references. It certainly wasn't afraid to highlight its beautiful women either. So if you want fun tv again, check out Hercules (and see if you can find the hard-to-find tv movies).

Dog TiredReviewed in the United States on September 8, 2019
1.0 out of 5 stars
Quality: unwatchable, Do Not Buy **Unless you find it in HD**
Verified purchase
I thought it would save money to purchase an entire season rather than episode by episode - all it meant was that I was ripped off for $10 instead of $2. The quality is so poor as to render it unwatchable; I find it hard to believe this was a legal purchase - could the owners of the show possibly have let something this bad go out for purchase?
I remember how, years ago, if one copied a videotape and then lent it out and someone copied the copy etc. after a while the images were so blurry that if the voices didn't help determine which character it was, one couldn't really tell. That's what this was like. Yet I see no immediate recourse either for getting a watchable copy or for getting my money back. DON'T BE SUCKERED INTO BUYING THIS, IT'S FIT ONLY FOR THE GARBAGE - CANNOT BE WATCHED!
(I gave it a single star only because 0 was not an option) **Edit - Amazon canceled the video and says they will refund my money. It seems per Amazon that my internet/tv setup does not translate SD well, so I should stick with HD. Ultimately satisfied with transaction**
6 people found this helpful

Angie B.Reviewed in the United States on March 11, 2019
5.0 out of 5 stars
Wonderful Series!!!
Verified purchase
I bought this boxed set after purchasing the re-release of the series. I highly recommend this version if you want to hear commentaries by Kevin Sorbo and Michael Hurst(Iolaus). The packaging is a big bulkier than the 5 disk set but it is beautifully presented and the dvd’s are more protected, in my opinion. This set also includes the 5 movies that came out before the series. For that reason alone it’s worth purchasing but you also get season 1. I loved watching the show in the 90’s. It was so fun, even ridiculous at times but always entertaining. If you are looking for some good old fashioned fun look no further.
2 people found this helpful

Ian M. BurkingReviewed in the United States on January 11, 2018
2.0 out of 5 stars
Love this show! Badly damaged though
Verified purchase
Let me start by saying this show deserves a 5 star review in my opinion. It is very entertaining, and even though it can be cheesy it is very self aware. I can't suggest the product enough. Amazon's delivery was unfortunately very unacceptable. I had to have this set replaced twice because every copy they sent me came with scratched discs and smashed cases. I eventually just bought my own replacement case and stopped dealing with Amazon. Seasons 2 and 3 came in and the cases weren't quite as bad, so maybe it is just a Season 1 issue. But I would be cautious about Amazon's quality until they get it under control.
6 people found this helpful

Cam T.Reviewed in the United States on June 6, 2010
5.0 out of 5 stars
Hercules Season 1 Rerelease - Pros & Cons
Verified purchase
I was pleased to see the re-releases of Season One of Hercules & Xena, and I've added them both to my collection.

However, in the case of Season 1 of Hercules, there are some elements to consider in making the purchase of this re-release.

Pros: The episodes of Season 1 are in great shape, and well presented. Plus, these DVDs also have captioning for the hard of hearing. This feature was absent in the original Anchor Bay release. Plus, the packaging is also a lot smaller than the Anchor Bay release - a standard size DVD case, with multiple discs inside.

Cons: Unfortunately, this Season 1 release contains only the 13 episodes of Season 1, and none of the 5 movies which preceded them as part of Season 1.

The other cons, although this is more due to Universal/Anchor Bay (whichever), there is no separate product of the five movies. There is a DVD with just the first two movies, and the Hercules action pack only has the first two movies, along with the three episodes from Season 1 which introduced Xena, the animated Hercules & Xena film, and the Young Hercules movie.

A plea to Universal: Release the five films in a separate product if necessary, but please re-release them. And release the full Young Hercules series. It's a great series that deserves equal exposure to Hercules and Xena.
7 people found this helpful

Call me KIDReviewed in the United States on September 8, 2016
5.0 out of 5 stars
Glad the remade it and made it affordable to buy all but the last season for some reason, great show.
Verified purchase
I really like Kevin Sorbo and thin he makes a great Hercules. I've seen many of these episodes in my younger days and am glad to own all but the last season. Don't know why it's not remade and available like these the first five seasons. I think the picture quality is just ok, nothing impressive. Sound is good. Story lines are great. You can really get into this show and it's packaged well and not just stacked discs. I recommend this to anyone looking for some wholesome action adventure.
2 people found this helpful
See all reviews
Back to top
Get to Know Us
Make Money with Us
Amazon Payment Products
Let Us Help You
EnglishChoose a language for shopping. United StatesChoose a country/region for shopping.
© 1996-2022, Amazon.com, Inc. or its affiliates