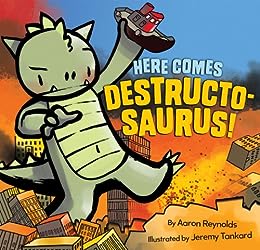 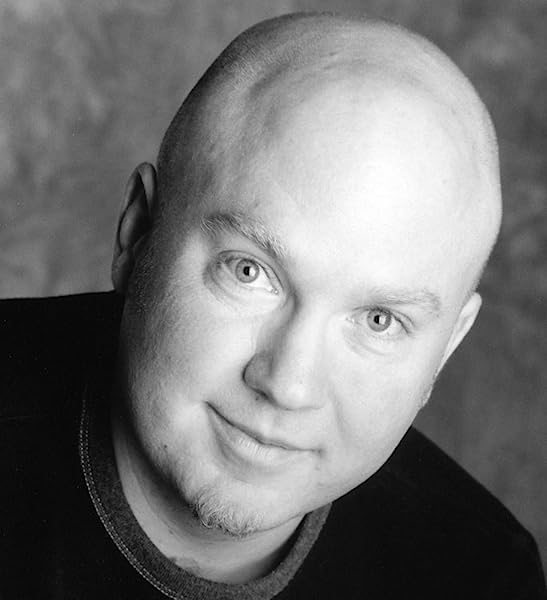 by Aaron Reynolds (Author), Jeremy Tankard (Illustrator) Format: Kindle Edition
See all formats and editions
Sorry, there was a problem loading this page. Try again.
Watch the unstoppable destructive force of a raging temper tantrum! Tremble at the enormous mess and disrespectful roaring! Despair as no amount of scolding can stem the heedless fury! Someone is heading for a time-out, Mister! Anyone who has witnessed (or been) a toddler in the throes of a full-blown fit will delight in this clever book's moviemonster rampage, and may just come away from it with a bit more sympathy for toddler and caregiver. Plus, this is a fixed-format version of the book, which looks nearly identical to the print version.
Read more
Previous page
Next page
Fire Tablets
Fire Phones
Free Kindle Reading Apps
Available on these devices

K-Gr 2—A baby dinosaur emerges from the sea and goes on a rampage across New York City, tracking seaweed and dead fish all over the tourists and setting fire to every ship in the harbor. His tail the size of a small planet, Destructosauraus is chastised by the narrator for his lack of self-control and for his sassy attitude, much like a mother would speak to a wild child. And in the end, readers discover that the lonely creature is simply looking for his teddy bear. Once he finds it, he retreats to the sea, softening the tone of the narrator and even hugging her. But while the narrator instructs Destructosauraus to help clean up the mess he's made, the creature just heads back to the sea from where he came. Enter King Kluck, a giant chicken, and, much to the narrator's surprise, instead of helping, the destruction continues. Big bright art outlined in bold black lines brings the young dinosaur's search for his toy to life, and his expressions clearly display his determination and frustration. This over-the-top tale that pushes the limits of the narrator's authority will delight readers.—Jennifer Miskec, Longwood University, Farmville, VA --This text refers to an out of print or unavailable edition of this title.

The author of Creepy Carrots (2012) makes a nod to movie monsters in his latest, featuring a child in the midst of a tantrum who becomes an oversize, havoc-wreaking dinosaur. Destructosaurus tracks in seaweed and dead fish, burps flames, topples bridges and skyscrapers, roars, and tosses buildings about before locating his missing teddy bear, the reason for his rage. The text, a monologue delivered by his caregiver, consists of the mostly calm (but sometimes sarcastic) language used by exasperated adults trying to diffuse an angry outburst. Tankard’s cartoon-style art is the perfect foil for Reynolds’ seemingly rational text. His humorous illustrations feature boldly outlined characters, vivid colors, and rich backgrounds. The compositions are often cluttered (apropos to the mayhem depicted) but Destructosaurus (and the child’s perspective) remain clear focal points. Although the text may leave toddlers restless, this will strike a chord with older preschoolers and their caregivers who are experienced with these tirades. Pair with Jane Yolen’s How Do Dinosaurs Say I’m Mad? (2013). Preschool-Kindergarten. --Kay Weisman --This text refers to an out of print or unavailable edition of this title.

"I actually laughed out loud when reading this, and I don't always do that. Awesome."--Elizabeth Bird, New York Public Library Collections Specialist

"Will strike a chord with older preschoolers and their caregivers who are experienced with these tirades."--Booklist

"This over-the-top tale that pushes the limits of the narrator's authority will delight readers."-School Library Journal

"Both toddlers and mothers can laugh at the inevitable behavior all kids and parents go through."--Kid Lit Reviews --This text refers to an out of print or unavailable edition of this title.

Aaron Reynolds works full time as a speaker/presenter and teacher. He has written many great books for kids, including Carnivores. He lives in Fox River, Illinois.

Jeremy Tankard is the author and illustrator of wonderful and silly books for children. He grew up in South Africa, the United States, and Canada. He currently resides in Vancouver, Canada. --This text refers to an out of print or unavailable edition of this title.
Read more

4.0 out of 5 stars
4 out of 5
35 global ratings
How are ratings calculated?
To calculate the overall star rating and percentage breakdown by star, we don’t use a simple average. Instead, our system considers things like how recent a review is and if the reviewer bought the item on Amazon. It also analyzes reviews to verify trustworthiness.
Top reviews

GrandmaSmileCustomer
5.0 out of 5 stars Very funny book.
Reviewed in the United States on November 15, 2018
Verified Purchase
Hilarious book. I bought it after my daughter got it from the library, and I read it to my 3 year old granddaughter. She was laughing hysterically. We had to read it 3 times.
Read more
Helpful
Report abuse

Amanda Youngblood
4.0 out of 5 stars My kids liked it
Reviewed in the United States on January 2, 2016
Verified Purchase
At first, I wasn't sure I liked it, because it felt like I was listening in on a scolding, but it made my children giggle (especially towards the end) and that's the point. They liked it, so that's what counts.
Read more
Helpful
Report abuse

Maude's Mama
5.0 out of 5 stars Another great way to get kids reading
Reviewed in the United States on January 1, 2015
Verified Purchase
Great gift for an almost-two boy. He was fascinated by the pictures at first, sat still later long enough to hear the story.
Read more
Helpful
Report abuse

kce8315
4.0 out of 5 stars Funny
Reviewed in the United States on January 2, 2016
Verified Purchase
Very cute book. My 3 year old first saw this at the library and we thought the story was funny.
Read more
Helpful
Report abuse

jan kozelka
5.0 out of 5 stars Hilarious
Reviewed in the United States on April 10, 2014
Verified Purchase
I laughed the whole time I read this, if your kids don't like it, you sure will! My preschoolers loved it
Read more
Helpful
Report abuse

Susan Hitchcock
1.0 out of 5 stars Here comes distructasaurus
Reviewed in the United States on May 4, 2014
Verified Purchase
Talking with slang, rudeness, abrasive Is not a way up talk to your kids to teach respect, manners, etc. how can a parent expect respect when this book does it in a slanted way.
Read more
One person found this helpful
Helpful
Report abuse
See all reviews