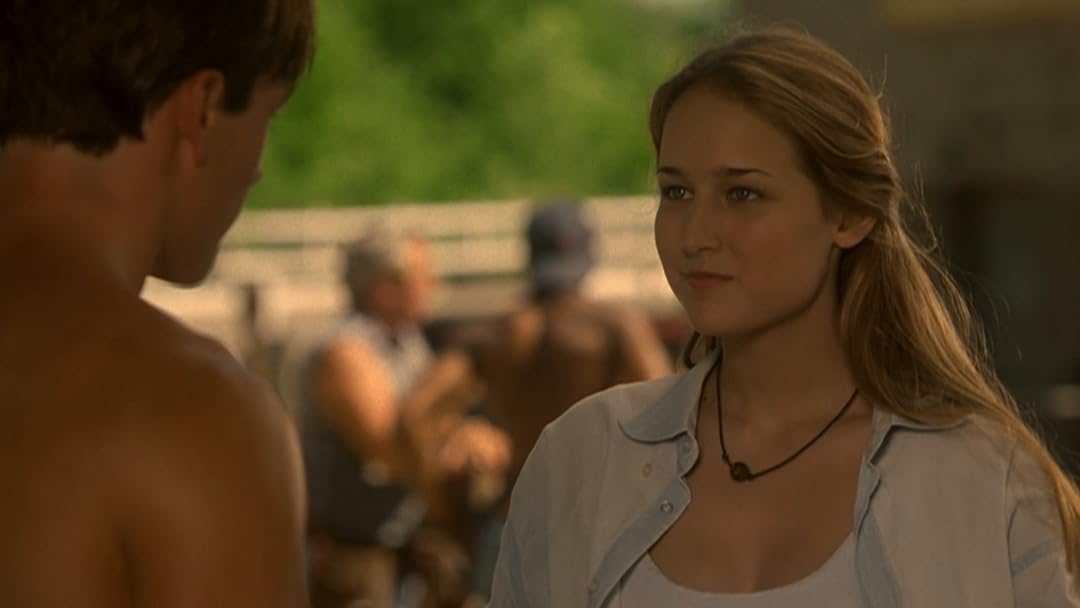 Robert E. GaronReviewed in the United States on October 29, 2016
2.0 out of 5 stars
HOLLYWOOD FAKES A FIRST LOVE STORY
Verified purchase
While the storyline is interesting, it was not executed well in the time format. The film seemed like an outline for a movie and time wise it was never fully experienced by the audience. The actors were given too brief a period of time to communicate the depth of the relationship with scenes which did not enable the audience to experience the growth of the relationship between the couple. The script was not fully honest in that the young man who fell in love with the girl, deserted her without having a real motivation to leave and returned without having enough motivation to return. The father/son relationship made both the father and son as shallow as the script. The father, who was suppose to be a successful man came across as someone who was easily disliked , controlling and had little love or respect for his son and yet his son grew up obedient to all authority. At the same time, rebelled at the first opportunity by racing and destroying the restaurant and gas station. Most of all, the girl. who was the love interest comments on their first encounter, makes a remark, "If you look at my ass as I am walking away, I will dump your malt in your lap." Pure Class.
One person found this helpful

PrettytoyzReviewed in the United States on June 27, 2016
4.0 out of 5 stars
Comfort Movie
Verified purchase
You know this storyline. You know how it will end. But that's why you'll watch it. Because sometimes you want predictable. You know it will make you smile and go awww at the end or it will make you cry big heaving tears. Whatever. It requires little of you, no complicated plots, no big surprises. Grab a bowl of ice cream, or a big bar of chocolate, get comfy cozy and just wrap yourself up in another comfort movie.
They keep makin' them because we keep watching them. And that's ok.
11 people found this helpful

beanlynchReviewed in the United States on July 1, 2016
3.0 out of 5 stars
Emotional, starts uneven, redeems itself, but needs a better leading man
Verified purchase
Throughout most of the movie I found myself rooting for the other guy, and then the story takes a turn and you realize it's not a movie about rooting for someone. They attempt to redeem the lead, unfortunately Chris Klein doesn't really make you feel it. In my opinion the movie would have worked a lot better if the Josh Harnett and Chris Klein roles were reversed. That said, Harnett is brilliant as a supporting character showing multi-dimensions that the lead character lacks. He comes across as the hero of the movie even though Klein's character eventually comes around. The Leelee Sobieski character is hard to sympathise with until we fully understand the story and she is easily redeemed by it. The story was emotional. It did move me. But a weak performance from the leading male just brings the movie to being just okay. And the character's lack of connection or growth with anyone except Sobieski's character leaves him shallow. The movie ends up being Harnett's, even though it tried not to be.
2 people found this helpful

Butterflymom54Reviewed in the United States on August 7, 2018
5.0 out of 5 stars
Beautiful love story
Verified purchase
What I like about this story is that the young man never changes. He is who he is. He loves her and she loves him. This is the story of two young people who meet and live on the other side of town. They have an instant attraction despite other people who do not like their budding relationship. The young woman has a male best friend who cares deeply for her. He has a wealthy Father who expects him to attend Princeton College. They both just graduated High school. They are both young and have many emotional hurdles to get over but as this story evolves they do so nicely. Take a chance and enjoy a story that is so sweet. Many great actors and actresses help this story stand out. This movie is similar to A WALK TO REMEMBER but different enough to enjoy also. So enjoy!!
One person found this helpful

K R TReviewed in the United States on September 27, 2016
3.0 out of 5 stars
Some good acting but.. both story and Klein could have been better.
Verified purchase
It was good in parts, and other parts didn't get developed enough to be fully understood.. reasoning behind motives. Ok the three actors that make this movies are Leelee Sobieski who plays Sam.. Love her!! She is a natural. ... Josh Hartnett, who plays Jasper... Really like him natural acting... And Chris Klein, who plays Kelley. I tried to get into his character but it felt like his acting was "trying to hard to be a good actor and deliver his lines... Those two Really it felt so natural to watch.... Just not Kleins trying so hard. It made no sense of why she would choose "Kelley" hen he felt disconnected from most not all scenes and the character development was NOT there. It said on Amazon DVD cover Klein was smolders, I laughted as it felt faking.
What got o my nerves the most is Watching Klein act... when Josh.. aka Jasper really showed he deeply cared for her and they had more connection, and he is a better actor.
2 people found this helpful

Ashley Aquino-MoralesReviewed in the United States on August 28, 2016
1.0 out of 5 stars
couldn't even finish this movie it was so bad. They were all so fake
Verified purchase
Man, couldn't even finish this movie it was so bad. They were all so fake, as in the acting, and she treats the preppy boy (can't remember his name) like utter crap up until the point where she miraculously drops Jasper and gets on the greyhound with him (which by the way, where the hell was her ticket? IRL you're not just going to pound on a bus' door and they're going to open it and let you ride on it for hours in the name of love). I'm sorry but they just did not convince me. Especially when the preppy boy says its clear she made her choice and she says that's not a fair thing to say. WHY NOT?? You clearly have been jerking around 2 guys who treat you pretty close to gold standard for teenage boys, and you continue to refuse to make a choice between them. Why was this an acceptable story line in someone's mind, particularly with such bad acting? Glad I didn't finish it. No way they could've salvaged this movie in the last half hour. Being a teenager does not automatically imply being indecisive and wishy washy. Scriptwriter here clearly cared squat about that and chose to reinforce the stereotype. Shame and a waste of time.
One person found this helpful

The Tally HoReviewed in the United States on January 1, 2018
5.0 out of 5 stars
Swinging on the Birch Trees
Verified purchase
A great love film reminding us of the important things in life. Leelee Sobieski is beautiful as always and does a great job acting in this part as well. During the first 15 minutes or so I did not think I was going to like this film as I thought it was going to be another film glorifying violent and unhonourable behaviour with youth but I am glad I stuck around.
2 people found this helpful

Charmaine Young Reviewed in the United States on June 25, 2016
3.0 out of 5 stars
Okay
Verified purchase
I wanted to see the male lead have more of a relationship with the family that took him in sence his father was not that involves with him. I did not get what her fascination with the main character was. He thought he was above them and looked down on the town. The female leads boyfriend was a really nice guy. He was also better looking.
2 people found this helpful
See all reviews
Back to top
Get to Know Us
Make Money with Us
Amazon Payment Products
Let Us Help You
EnglishChoose a language for shopping. United StatesChoose a country/region for shopping.
© 1996-2021, Amazon.com, Inc. or its affiliates