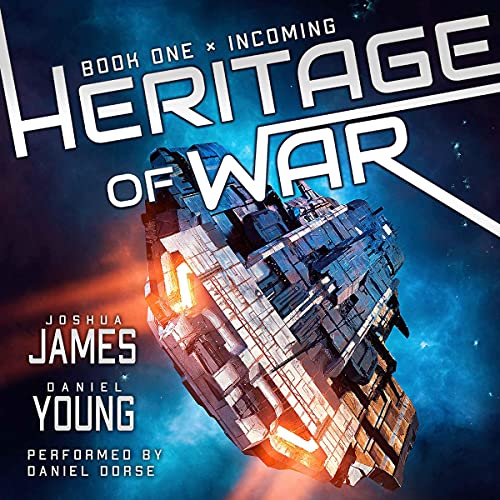 List Price: $14.95
You Save: $1.87 (13%)
By completing your purchase, you agree to Audible’s Conditions Of Use
Sold and delivered by Audible, an Amazon company
Share

4.4 out of 5 stars
4.4 out of 5
71 global ratings
How are ratings calculated?
To calculate the overall star rating and percentage breakdown by star, we don’t use a simple average. Instead, our system considers things like how recent a review is and if the reviewer bought the item on Amazon. It also analyzes reviews to verify trustworthiness.
Top reviews

Mjm
5.0 out of 5 stars An impressive start to a great new series!
Reviewed in the United States on May 28, 2021
Verified Purchase
This series, a sequel to the “Legacy of War” series, starts quick and keeps going to the end. Having made a peaceful alliance with their prior enemy Kaxeks, humanity is now faced with infiltration of the Threqa, a powerful race of multi-dimensional shapeshifters with strange abilities, who believe that their religion is the only true one, and are actively purging all other races from the universe. The United Earth Force needed ships, and was busily retrofitting all the old ships that could fly. Devlin Carter was promoted to Commodore and assigned to staff work in Switzerland; Aiden Foster, who wanted to retire, was promoted to Captain of the re-vamped destroyer Viper, with a young crew on their first ship assignments and already headed to battle. He was faced with reporting to Captain Marilyn Scroggins, a battle group commander who believed that Carter and Foster should have been court-martialed for not following orders and operating outside established protocols (even though that was the reason for their success) in the Kaxek conflict. His XO, Commander Tal Brok, a Scroggins toady, had expected to be promoted to Captain of the Viper, so his anger was channeled into making sure that any mistake by Foster would be amplified to get him removed. And, no one in authority believed that the Threqa had penetrated their defenses, even though Kaxek shapeshifters had operated for years disguised as United Earth High Council members before being uncovered.

Even before the Viper could be readied for launch, the crew found evidence of sabotage, several members were assaulted and a number of Threqa were discovered disguised as UEF officers. They quickly found that the Threqa could not be killed by pulse weapons, that they could assume the shape of any person or material, and pass through solid walls. How could humans possibly win a fight with such an enemy? How could they even be sure they weren’t surrounded by disguised Threqa?

The story is well-written, with lively characters and lots of action, which kept me engrossed, rooting for the good guys. I read for escape and entertainment – this book certainly hit the target. While this can be read as a stand-alone series, I would recommend reading “Legacy of War” first, because it provides a complete background for better understanding the plot. I am a devoted fan of this author team and received an ARC – this review is my honest opinion. I had pre-ordered the book to support this great team, and I have already pre-ordered the next one, too.
Read more
Helpful
Report abuse

Lcashless 1.
4.0 out of 5 stars I’d give it a five star review but it’s too short.
Reviewed in the United States on May 4, 2021
Verified Purchase
This is a good continuation from the first series. The action is fast paced and the psi phi aspects are great. I like foster and his collective group of crewmembers. There is a lot to unpack and a lot of possibility in the series. There is so much possibility that I don’t understand why the book was so short. Just when you get started the book is over. The author could have at least written another hundred pages, now we have to wait till June for the next installment. The series is definitely worth reading.
Read more
One person found this helpful
Helpful
Report abuse

Jim
4.0 out of 5 stars The story ended
Reviewed in the United States on May 5, 2021
Verified Purchase
The book was very good except the ending was too abrupt. It left me hanging. It was well written and I enjoy the book.
Read more
Helpful
Report abuse

Karl
5.0 out of 5 stars Great reading
Reviewed in the United States on June 19, 2021
Verified Purchase
Enjoyed reading it. Can not wait for the next one to read. Will be reading more of the author's books
Read more
Helpful
Report abuse

Phil
5.0 out of 5 stars A very Ominous beginning
Reviewed in the United States on May 3, 2021
This series picks up where the series “Legacy of war” ends. Humanity has made peace with and built an alliance with their old enemy the “Kaxek”. Devlin Carter has been promoted to Commodore and shipped off to a quiet desk job in Geneva. Aidan Foster’s battlefield promotion has been made official and he is about to take command of the “Viper”. Immediately things go wrong. A new enemy, a shapeshifting race called the “Theqa”, a race we were introduced to at the end of “Legacy of War” is already infiltrating and attacking in a bid to wipe out Earth and kill off humanity. The Action is immediate and intense. If you enjoyed “Legacy of War” or you like an adrenaline packed thrill ride that will keep your attention from beginning to end, then this is the series for you. If you haven’t read the “Legacy of War” series yet, I recommend you download it and read it first.
Read more
One person found this helpful
Helpful
Report abuse

ChristyTop Contributor: Fantasy Books
5.0 out of 5 stars Here we go again
Reviewed in the United States on May 2, 2021
Aidan Foster is back ad the star, wait I mean the Captain of the ship Viper. Of course he does not want to be captain but that does not stop the Brass or him from stepping up and doing his job. Of course Foster does not get a quiet day to learn about his new job and ship. Instead the story and this spin off series starts with a bang and nonstop action. I was glued to the end in awe and amusement at what happens between the danger, craziness, alien and human problems that occur. I loved it and glad I could read it early. a new set of characters are introduced and they are going to be a blast to watch on this crazy adventure.
Read more
Helpful
Report abuse

Elaine Bishop
5.0 out of 5 stars Buckle up your space belts , for another fine ride!
Reviewed in the United States on May 2, 2021
This book starts off with an old character Adian Foster back in the captain seat again. This time it on the ship "Viper", once said to not be of much service anymore 10 years ago, he and his crew of ready to rumble and the guys and gals take it to space. The action starts while they are still in port, and it never stops through to the end where we are left hanging on to see if humanity and his crew will survive the new aliens and the big brass over his head. Much of the same fun in this book as James and Young always provide. I look forward to seeing the next segment of this blast off story.
Read more
Helpful
Report abuse

JH & DDDH
4.0 out of 5 stars Frantic Pace
Reviewed in the United States on May 1, 2021
From the start, the action is frantic and moving at a pace only the Alien Enemy seems to control. The steadfast, reluctant Captain Foster tries to navigate his new ship, Viper, vs. foes both alien and internal of the human bureaucracy. This 4&1/2 hour book (in Audible format) felt like 2 hours with all the excitement, but ended as quickly as a "prequel" and with a cliff-hanger at that. I'll look forward to book 2 and hope for a longer version to the next part of the saga.
Read more
Helpful
Report abuse
See all reviews

Rod Hosking
4.0 out of 5 stars Good
Reviewed in Australia on May 18, 2021
Verified Purchase
This was a very good story. I look forward to reading the next and have already pre-existing the next book in the series.
Read more
Report abuse
See all reviews
Back to top
Get to Know Us
Make Money with Us
Amazon Payment Products
Let Us Help You
EnglishChoose a language for shopping. United StatesChoose a country/region for shopping.
© 1996-2021, Amazon.com, Inc. or its affiliates