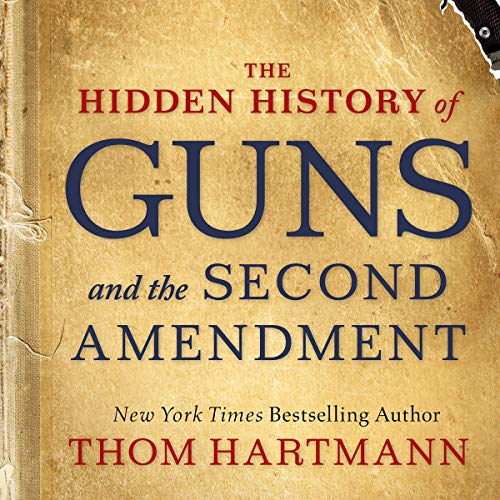 Thom Hartmann, the most popular progressive radio host in America and a New York Times best-selling author, looks at the real history of guns in America and what we can do to limit both their lethal impact and the power of the gun lobby.

Taking his typically in-depth, historically-informed view, Thom Hartmann examines the brutal role guns have played in American history, from the genocide of the Native Americans to the enforcement of slavery (Slave Patrols are in fact the Second Amendment’s “well-regulated militias”) and the racist post-Civil War social order. He shows how the NRA and conservative Supreme Court justices used specious logic to invent a virtually unlimited individual right to own guns, which has enabled the ever-growing number of mass shootings in the United States. But Hartmann also identifies a handful of powerful, commonsense solutions that would break the power of the gun lobby and restore the understanding of the Second Amendment that the Framers of the Constitution intended. This is the kind of brief, brilliant analysis for which Hartmann is justly renowned.

Special invitation from Audible!
Learn more about Membership
List Price: $14.95
You Save: $4.96 (33%)
By completing your purchase, you agree to Audible’s Conditions Of Use
Sold and delivered by Audible, an Amazon company
Share

4.5 out of 5 stars
4.5 out of 5
263 global ratings
How are ratings calculated?
To calculate the overall star rating and percentage breakdown by star, we don’t use a simple average. Instead, our system considers things like how recent a review is and if the reviewer bought the item on Amazon. It also analyzes reviews to verify trustworthiness.

Mike
1.0 out of 5 stars Buy at own risk!
Reviewed in the United States on June 27, 2019
Verified Purchase
First, I have to say I am a teacher, and I teach U.S. history. I own a few firearms, but I do NOT support the NRA, and I believe we must take action to curb the epidemic of firearms violence. With that being said, I believe Mr. Hartmann takes historically true, documented events, but his interruption of these events is debatable, and therefore his linkage to how these facts affected our society is debatable, to say the least. Some, in my opinion, are outright faulty logic. Mr. Hartmann also skips many historic facts that do not support his overall cause (Restricted firearm ownership by people of color in the US South ) is avoided. If you’d like to read another view on firearm restrictions, or at least start the discussion on restricting firearms, because the Second Amendment is racist against people of color, White men need their firearms to protect themselves against people of color (like the KKK), Nixon invited racist Southerners into the Republican party, all semiautomatic firearms should be restricted just like Class 3 fully-automatic “Machine Guns”……then please enjoy this book. I bought this book, Mr. Hartmann has my money from the sale, but I expected more than just one side’s unsupported talking points…..so I was disappointed. But I am an Angry White Guy who owns guns…..so I am the problem. Please, decide for yourself….you might just love this book!
Read more
47 people found this helpful
Helpful
Report abuse

Fauzia Burke
5.0 out of 5 stars A must read
Reviewed in the United States on June 11, 2019
Verified Purchase
Anyone who wants to keep themselves and their loved ones safe needs to read this book. This is a conversation we need to have.
Read more
23 people found this helpful
Helpful
Report abuse

Stanley Hauer
VINE VOICE
5.0 out of 5 stars The beginning of discussion on a diffucult topic
Reviewed in the United States on May 19, 2019
Vine Customer Review of Free Product( What's this? )
Thom Hartmann is a Progressive columnist, commentator, and author of some score of books on current social issues. His latest work is The Hidden History of Guns and the Second Amendment, a concise but insightful survey of its subject. Hartmann’s treatise is not just a liberal rant against gun use; rather, it has a practical focus on a thesis: “There’s no practical or legal impediment to regulating guns to make them safer—except the lobbying power of the gun industry and the few fun owners who behave like cultists.” I hope this little book is widely read and reviewed. It deserves serious attention and analysis of its data and conclusions.

The degree of American gun abuse and violence is well known. Indeed, Hartmann’s data are already seriously out of date in just the time it took to get his pages printed and published. The statistics are horrifying: The United States represents only 4% of the world’s population but owns 50 % of the world’s guns. Sixteen million new firearms are sold in the U.S. each year. More than 6 out of 100,000 Americans are killed annually by guns, compared to an average of other developed nations at 0.6. How did we ever come to this state? Hartmann explains.

More than any other factor, American use of firearms is a result of racism. This history can be traced as far back as the first colonial settlements, where “the destruction of the Indians of the Americas was, far and away, the most massive act of genocide in the history of the world.” To cite just one example, the native population of Hispaniola in the Caribbean was reduced from 300,000 to 0 within a half-century of the arrival of Columbus. This kind of terrorism continued into the days of the early republic, when local militias enforced slavery in the Southern states at the point of a gun. The system of the local slave-patrol militia was enshrined in the Bill of Rights as the Second Amendment, with its curiously non-dependent introductory phrase: “A well-regulated Militia, being necessary to the security of a free State . . . .” Early drafts of the amendment and letters from the Founders make it quite clear that the Constitutional Congress feared a standing army (Article One, Section 8) as a threat to the government, preferring a more controllable militia instead.

The semi-legendary figure of the cowboy and the Wild West furthered the racist agenda, culminating in the assassination of Lincoln and the rise of the KKK. In the 1960’s America saw a change in gun-use patterns with the rise of the lone terrorist such as Charles Whitman, the University of Texas mass-shooter. Angry white men were killing their fellow citizens in frustration and rage. Within a half-century of recent history 150 such public mass shootings have resulted in the deaths of over a thousand Americans. This movement, says Hartmann, is the result of three factors: protests over the Vietnam War, white fear of racial turmoil, and the election of President Reagan. Blacks especially were literally under fire, their numbers comprising 59% of arrests for drug offenses though black Americans constitute but 17% of the national population.

Corporate America entered the fray, metaphorically at least, with the Heller Supreme Court Decision of 2008, with an essential rewrite of the Second Amendment so that it now guaranteed an “individual right” to own a firearm, a sentiment neither intended nor implicit in the original amendment. In his widely-discussed majority opinion Justice Scalia, says Hartmann, “stretched logic and fantasy to the breaking point.” In a metaphorical sense, every gun holder is now a private militia. The NRA, which once supported gun control, is now the spokesperson for Scalia’s point of view.

However, Hartmann’s book does not end on this note of despair. He offers three (unlikely) legal solutions: pack the Supreme Court, pass legislation undoing the Citizens United decision (which lifted limits on wealthy corporate spending on elections), and amend the Constitution. On a more practical level, Hartmann concludes with two well-argued suggestions: to outlaw semiautomatic weapons in the way we do fully automatic ones and to regulate gun ownership just as we do car ownership, fishing, or the manufactory of toys, furniture, and carpets. New technology such as fingerprint readers, radio-frequency identification, and microstamping all offer avenues toward such an innovative approach. The lessons of other developed nations who have developed greater gun control offer powerful evidence of its effectiveness.

Well, that’s Hartmann’s argument in a precis. Sometimes his logic is fuzzy, and I’m not sure his conclusions are always clearly derived. But as a first book on the subject (it was for me, at least), it represents a good step toward addressing America’s serious problem with guns.
Read more
42 people found this helpful
Helpful
Report abuse

Jerry B.
5.0 out of 5 stars A great historical account
Reviewed in the United States on August 28, 2019
Verified Purchase
The actual history of the second amendment is brought to light. Very interesting fact as to the motives behind the language of the final draft that we see today. If you are a history buff, firearms enthusiast or just want to know what’s behind the ruckus, then it is a very quick read. Thom offers some solutions which have been brought to light previously. Spoiler the solutions are not about banning firearms.
Read more
11 people found this helpful
Helpful
Report abuse

JC
5.0 out of 5 stars Excellent book written by one of the smartest guys in America
Reviewed in the United States on July 9, 2019
Verified Purchase
Read this cover to cover over a few days and learned so much. Deals with guns, racism, politics, policies, etc. Well worth the read
Read more
11 people found this helpful
Helpful
Report abuse

Oliver DeMille, TJEd
TOP 1000 REVIEWERVINE VOICE
2.0 out of 5 stars Disappointing
Reviewed in the United States on May 17, 2019
Vine Customer Review of Free Product( What's this? )
The title, I think, is intended to be a draw for people who have a relationship with firearms - but I found this book to be very disappointing. I feel that it was severely lacking in objectivity. Very liberal. If you are for gun control already, you'll probably like this book. If not, you likely won't enjoy it much; it doesn't really do much to match, latch and lead a reader who starts out disagreeing with the author's position. I had hoped to get a book that showed both sides of the issue, and taught something new to both sides--something that could bring people together. This book doesn't do that. For those already on the side of increased gun control, it has some interesting ideas, stories, and stats.
Read more
46 people found this helpful
Helpful
Report abuse

Al Fox
3.0 out of 5 stars Too Much Preaching
Reviewed in the United States on July 30, 2019
Verified Purchase
Some good information, such as: the Debates that led to the 2nd Amendment (and what its original meaning was),
what the Supreme Court did (wrong) in the Heller decision, and some other historical info about our gun culture. But the books moves way behind the factual into the preaching, which led me to give only 3 stars.
Read more
8 people found this helpful
Helpful
Report abuse

Old Sailor
5.0 out of 5 stars America's Guns
Reviewed in Australia on September 28, 2019
Verified Purchase
This book goes a long way in explaining the reasons for the Second Amendment, and why gun ownership is so fundamental in the US compared to other western democracies.
We learn about the mass killings of native Americans, as settlers fought their way westward and why southern slave owners all had guns to catch and return escaped slaves.
Today's problem is that the guns at the time of the Second Amendment and western settlement bear no resemblance to the deadly automatic weapons of today, which are used in mass random shootings of innocent citizens.
Read more
Report abuse
See all reviews
Back to top
Get to Know Us
Make Money with Us
Amazon Payment Products
Let Us Help You
EnglishChoose a language for shopping. United StatesChoose a country/region for shopping.
© 1996-2021, Amazon.com, Inc. or its affiliates