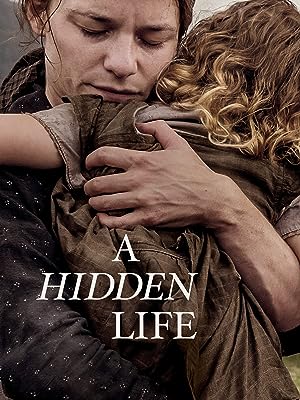 (1,011)
7.42 h 54 min2019HDRUHDPG-13
From visionary writer-director Terrence Malick comes this timeless story of love and conscience based on real events about an Austrian farmer who refuses to fight for Hitler.

Paul AllaerReviewed in the United States on January 3, 2020
4.0 out of 5 stars
4.5 stars... 2nd best movie of the year, with Terrence Malick at the top of his game
"A Hidden Life" (2019 release; 172 min.) brings the story of Austrian farmer Franz Jägerstätter and his family. We are reminded that "the following story is based on true events", and as the film opens we get archive footage of the Nazis overpowering much of Europe and the cult of personality surrounding Adolf Hitler, who is idolized by the German masses. We then go to "St. Radegund, Austria 1939" as we get to know Franz and his wife and three young daughters. They live a simple life, farming the land and making ends meet as best they can. Life is hard but good. Then one day Franz is conscripted and we go to "Enns Military Base, 1940", where the Austrian conscripts are required to pledge their loyalty to Hitler. Franz refuses, and is taken prisoner... To tell you more of the plot would spoil your viewing experience, you'll just have to see for yourself how it all plays out.

Couple of comments: this is the latest opus (don't just call it a film) from writer-director Terrence Malick. His recent work has been decidedly mixed, including 2016's "Knight of Cups" and, even more of a head-scrtacher, 2017's "Song to Song" that was his worst movie ever. I am very pleased to tell you that "A Hidden Life" finds Malick back at his very best (think: "Days of Heaven", "The Tree of Life"), as he brings the true story of the WWII Austrian conscientious objector. First, Malick in his well-know way of free-flowing photography manages to create a bond between the characters and us, the viewers. As we watch the seemingly idyllic yet harsh life for Franz and his family in the small Austrian village, we very much care what might (or might not) happen to them. The movie's first hour is almost dream-like (or as my friend with whom I saw the movie said: "it's a one hour trailer"). Second, the movie sports a fabulous orchestral score, courtesy of veteran Hollywood composer James Newton Howard, that matches, or underscores, the movie's overall feel and mood perfectly. Third, the mostly no-names ensemble cast is absolutely delightful. I admit not being familiar with the lead performers' prior work, but August Diehl (as Franz) and Valerie Pachner (as his wife) are absolute tops. Keep your eyes out for a brief (maybe 10 min.) appearance by Belgian actor Matthias Schoenaerts as the Nazi Captain who first interrogates Franz as to why he refuses to pledge his loyalty to Hitler. Last, but certainly not least, one cannot escape or deny that this film is incredibly timely and political, as the parallels between what happened in Nazi Germany and what is going with the current POTUS are undeniable and, frankly, scary. Not pledging loyalty to Trump is what erstwhile FBI director James Comey got him fired in 2017, if you'll recall. For Trump, it's all about me! me! me!, nothing less and nothing more. Just another cult of personality.

"A Hidden Life" premiered to immediate acclaim at the 2019 Cannes film festival where it won several prizes and Fox snapped it up for big bucks. The movie started rolling out into theaters just before Christmas, and I couldn't wait to see it. The Christmas Eve screening where I saw this at with a friend at my local art-house theater here in Cincinnati was attended dismally (6 people in total), much to my surprise and disappointment. If you are a fan of Terrence Malick, or simply in the mood for an epic WWII conscientious objector​ drama, I'd readily suggest you check this out, be it in the theater, on Amazon Instant Video, or eventually on DVD/Blu-ray, and draw your own conclusion.​ For me, "A Hidden Life" is a WINNER all the way, and my no. 2 movie of the year (after "1917"). .

JRReviewed in the United States on April 4, 2020
5.0 out of 5 stars
Allow your heart to be moved with love and conviction to give your life.
Verified purchase
Beautifully done, showing the value of the hidden life and the courage to give up everything to be faithful to Christ. Also depicts the evil that lurks in the world and infects the multitudes. In addition, beautiful scenery. Very relevant for our times.
31 people found this helpful

Tracy Elliott-Smith, DDSReviewed in the United States on April 1, 2020
1.0 out of 5 stars
What a complete waste of time!
Verified purchase
Three hours of dreary slogging through a story with cardboard characters. Here this man leaves his beautiful family to suffer and toil without him and for what? We are dimly informed early on that he realizes Hitler is evil. Three hours later you know no more about him, his torments or his reasoning. I would have walked out in a theater but since we are all locked down I decided to punish myself further by holding out hope that there would be a rose somewhere in this pitiful pile of thorns.
25 people found this helpful

Sean3201Reviewed in the United States on April 27, 2020
5.0 out of 5 stars
A masterpiece.
Verified purchase
Having read the mixed reviews from critics, I went into the film expecting to be disappointed at least in a few ways. How wrong I was. This is an incredible piece of art - perhaps Terrence Malick’s greatest - and it earns every minute of its runtime. A Hidden Life is an emotional tour de force that so beautifully explores not just one man’s act of defiance in the face of evil, but the breadth of the human experience in all its facets: marriage, children, community, suffering, laughter, faith, evil, sanctity. Like Blessed Franz’s sacrifice, there are depths here to explore that I expect will demand from me repeated viewings, contemplation, and yes, prayer.
29 people found this helpful

Franz was beheaded for refusing a loyalty oath to Hitler and has subsequently been beatified. Watching this movie will also leave you with no doubt that his marvelous young bride should also be beatified!

As noted by Deacon Stephen Greydanus (National Catholic Register, 12/11/19), "Franz has no reason to think that even his neighbors...will ever think of him as anything but a misguided traitor (and, indeed, for decades after the war, that is precisely how he was remembered)." The deacon shares a quote from George Eliot, which the film maker uses in the closing credits: "the growing good of the world is partly dependent on unhistorical acts; and that things are not so ill with you and me as they might have been, is half owing to the number who lived faithfully a hidden life, and rest in unvisited tombs"

Merely in terms of cinematography, this movie is a stunning masterpiece.
56 people found this helpful

Merritt D. FarrenReviewed in the United States on April 1, 2020
5.0 out of 5 stars
One of the Most Magnificent Films Ever Made
Verified purchase
Every scene, every shot is perfection. A riveting story of courage, moral strength and love that should be a must see in our time where those with a strong moral compass feel constantly under siege.

The writing, acting and directing are without equal, and the photography and music are sublime.

Don't expect easy. This film will challenge you to think, question, contemplate and finally, with reflection, understand. More than worth the effort and worth a second viewing, if you've already viewed it once.

A triumph. This is what great film making is about.
20 people found this helpful

Max VehrleReviewed in the United States on March 19, 2020
5.0 out of 5 stars
An immensely important film to be seen in these cruel and ambivalent times.
Verified purchase
If 6 stars were possible I would grant them to this beautiful and wrenchingly poignant film. Of course the work of a master. One is left so affected that words are simply inadequate.
23 people found this helpful

Orson WellesReviewed in the United States on April 7, 2020
5.0 out of 5 stars
A major comeback for Malick. A Hidden Life is a masterpiece.
Verified purchase
A Hidden life is a film I will watch again and again. I think it is his best film. If you checked out on Tree of Life and Knight of Cups, you can come back to everything that made you love Malick's Badlands and Days of Heaven (and The Thin Red Line). Only people who know nothing about film or who hate Malick could give A Hidden Life less than 5 stars. It gets richer and richer with each viewing.
19 people found this helpful
See all reviews
Back to top
Get to Know Us
Make Money with Us
Amazon Payment Products
Let Us Help You
EnglishChoose a language for shopping. United StatesChoose a country/region for shopping.
© 1996-2022, Amazon.com, Inc. or its affiliates