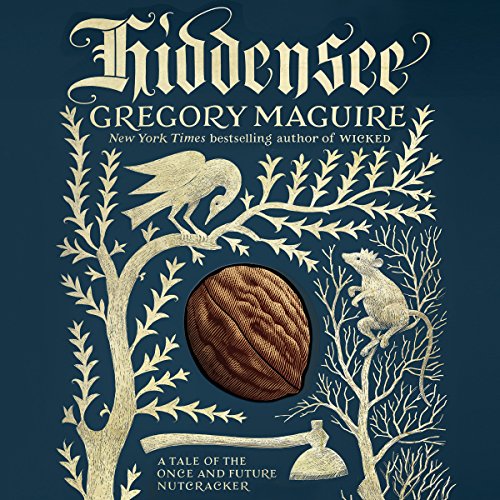 Hiddensee: A Tale of the Once and Future Nutcracker

4.0 out of 5 stars
4 out of 5
279 global ratings
How are ratings calculated?
To calculate the overall star rating and percentage breakdown by star, we don’t use a simple average. Instead, our system considers things like how recent a review is and if the reviewer bought the item on Amazon. It also analyzes reviews to verify trustworthiness.

Avid Reader
5.0 out of 5 stars My hat is off to you Mr. Maguire
Reviewed in the United States on November 24, 2017
Verified Purchase
If there are two people there you will find three opinions. I have read the reviews of this book not just here at Amazon but at other sites. My take away? People are brutal. This new work by Maguire is not for everyone, nor should it be. If you are hung up and starry eyed about Wicked, then pass on this one. However, if you want to be immersed in a rich, dark forest that gave birth to Hans Christian Anderson, The Brothers Grimm and German Romanticism,then this is the place for you. The book is so full of grief, longing and restrained feelings. They permeate every leaf and bower of the text. How does a novelist weave so seamlessly the worlds of 19th century Bavaria, Anton Mesmer and German Romantic painters and then situate them somewhere in the region of fairy tales? He researched deeply his subjects and wove them, with gorgeous prose, into a story of lost childhoods and lost imaginations. It may not be perfect. Yes, even I wanted a section or two to glide by. Yet, by the final few pages I knew something had been found within me; my own lost forest. I now am happy to say I will pay closer attention to it and to the dreams and hidden keys found in odd and seemingly unheard of places. My hat is off to you Mr. Maguire.
Read more
102 people found this helpful
Helpful
Report abuse

Heather
5.0 out of 5 stars I didn't like it at all
Reviewed in the United States on July 13, 2018
Verified Purchase
I have only seen "The Nutcracker" performance once. I didn't like it at all. I thought it was silly and strange. I had never read about it. I have a friend who is NUTS about The Nutcracker and owns an amazing collection. I bought this book for her because of her love of everything Nutcracker. I decided to read a few pages to see what it was about. I was hooked.

I enjoyed the story from beginning to end. I have a vague idea about what The Nutcracker is about from this book, but that play/ballet I saw...well, that Mother Ginger just threw me! Now I am very interested in learning more. This book is the backstory to The Nutcracker.

This was a great book to read around Christmas. I hope my friend enjoys it as much as I did. I might have liked it more because I don't know the original story.
Read more
18 people found this helpful
Helpful
Report abuse

Bella
1.0 out of 5 stars ZERO STARS
Reviewed in the United States on December 8, 2019
Verified Purchase
I do not know if I will even waste my time finishing this drivel. Perhaps, I should not even waste my time writing the review that will be lost among the throng of supporters giving it more than one star. Maybe, I am an uncultured swine, but I think this book lacks character development and a plot worthy of pursuit. While I was expecting more Nutcracker and less Brothers Grimm, I was not expecting a good read based on everything I heard about the book from people in my book club who had already finished it. Thus, even with low to no expectations for this book, I gave it a fair chance and now understand why half the people in book club did not bother to finish it. I am typically a book finisher, but as I only have one life to live, my time is precious to me and better spent reading something that stimulates my mind. Time is not a commodity that should be wasted on drivel. IMHO. In full disclosure, I write this review after only 2 hours of reading. All I want for Christmas now is to be able to return this Kindle purchase for a full refund.
Read more
5 people found this helpful
Helpful
Report abuse

Stephen Thergesen
5.0 out of 5 stars Another Maguire Marvel
Reviewed in the United States on November 1, 2017
Verified Purchase
Since reading "Wicked" more than 20 years ago, I have marveled at Mr. Maguire's talent for retelling classic fairy tales with modern vigor. Hiddensee does not disappoint and, in fact, takes me back to those early days in his career, when I felt as though he had written expressly for me. Perhaps all his readers feel this way. Even so, I felt as though once again I was his only audience. Thank you, sir.
Read more
15 people found this helpful
Helpful
Report abuse

Jackdaws
1.0 out of 5 stars Long, hard slog...
Reviewed in the United States on February 9, 2019
Verified Purchase
I had read and enjoyed Maguire's Wicked, and thought Hiddensee would be a seasonal, festive fractured fairy tale. Instead, it was very slow, disjointed and deadly boring. Through the tortured first 80% of the book, you slowly learn the angst-ridden foundling Dirk becomes the Toymaker who creates the Nutcracker. Only the final 20% comprises the Nutcracker story, and it is quickly told in third person after the Christmas Eve events--totally anti-climactic. This book would have been much better as a short story without the brutal buildup. Strangely, Maguire's concluding acknowledgments have no discernible connection with the story or location, especially focusing on a place far, far from Bavaria.
Read more
6 people found this helpful
Helpful
Report abuse

greenmom
5.0 out of 5 stars Beautiful and engaging fairy tale for adults
Reviewed in the United States on January 1, 2018
Verified Purchase
I loved Hiddensee. I rarely ever write reviews, but I had read a lukewarm piece about this book, and I felt I had to add to its praise. This book is a beautiful and engaging fairy tale for adults. The language is unique, exquisite, and nuanced in a way I didn’t expect. Long into the night I found myself reading and unable to put down this enchanting tale. The main character is charming and hard to resist, the tone dark and yet inviting, and the secondary characters beautifully drawn. This book is more proof of Mr. Maguire’s skill and talent.
Read more
8 people found this helpful
Helpful
Report abuse

Stacey Garrison
5.0 out of 5 stars An imaginative story on the Nutcracker origin
Reviewed in the United States on January 18, 2021
Verified Purchase
I was very impressed with this book. This is my first time reading a book by Maguire, who is known for his alternative versions of well-known fairy tales and other stories. I was looking for something to read for the holiday season that wasn't "expected" and this really fit the bill! It is very engaging and unique, pulling you into a world and time that feels imaginative though still "real" simultaneously. This is not an overly indulging fantasy book and is not a story you can read to your kids. It is more of a sophisticated memoir of a man's life journey and experience, that is special and filled with amazing moments, yet everyone he encounters sees the reality and the magic more than he does. It's very complex, slightly dark, but also hopeful and whimsical. It is very smartly written, full of beautiful language with some traditional German thrown-in to add authenticity to the story and dialogue. I love learning the origins of things, whether it's sayings, stories, etc. This is a satisfying narrative, as it gives you a peek behind the scenes of a life that led to the Nutcracker story. Highly recommend!!
Read more
Helpful
Report abuse

Texas Ted
2.0 out of 5 stars Feels Unfinished
Reviewed in the United States on June 24, 2018
Verified Purchase
This story alternated between captivating and dragging on. However, I kept reading because I was hoping for a satisfying ending that tied the rest the story together somewhat....instead I got a quick slap of mayonnaise on my peanut butter and cheese sandwich.....I cannot recommend investing the time to read this book.
Read more
4 people found this helpful
Helpful
Report abuse
See all reviews

Aisling Phillips
4.0 out of 5 stars Not quite Wicked but still good.
Reviewed in the United Kingdom on December 12, 2019
Verified Purchase
Whilst, compared to other Gregory Maguire books such as Confessions of an Ugly Stepsister, Egg and Spoon and of course the renowned Wicked series, Hiddensee appears not to have much of a plot line to it, it is nevertheless an interesting take on the Nutcracker story. Maguire introduces us to a younger Drosselmeyer, before his encounters with the Staulbauhm family, implied but never explicitly said to maybe be the product of an incestuous relationship, who may or may not be bisexual, as he travels across Germany from the wilds of the forests to the great cities to the snowy hidden villages where he encounters many people who greatly affect his life. It’s the story of how the Nutcracker comes to be in his possession and of how a young boy was both physically and metaphorically reborn after an encounter with a falling tree! Not quite as good as Wicked but still worth reading, the kind of book that just makes you THINK.
Read more
Report abuse

michelle
3.0 out of 5 stars Good but library stamps
Reviewed in Canada on February 22, 2020
Verified Purchase
While the book is in very good condition, I wasn't expecting it to have library stamps on the page edge and inside. If libraries sell books, there should be an additional stamp that confirms it was bought legitimately from them.
Quick delivery though and value overall though. The book itself is a fun read. Definitely much less involved than the Wicked series.
Read more
Report abuse

Amazon Customer
5.0 out of 5 stars Looking forward to reading
Reviewed in Canada on October 4, 2020
Verified Purchase
Haven’t read yet but read others by this author and was very interesting
Read more
Report abuse

Report abuse
Translate review to English
See all reviews
Back to top
Get to Know Us
Make Money with Us
Amazon Payment Products
Let Us Help You
EnglishChoose a language for shopping. United StatesChoose a country/region for shopping.
© 1996-2021, Amazon.com, Inc. or its affiliates