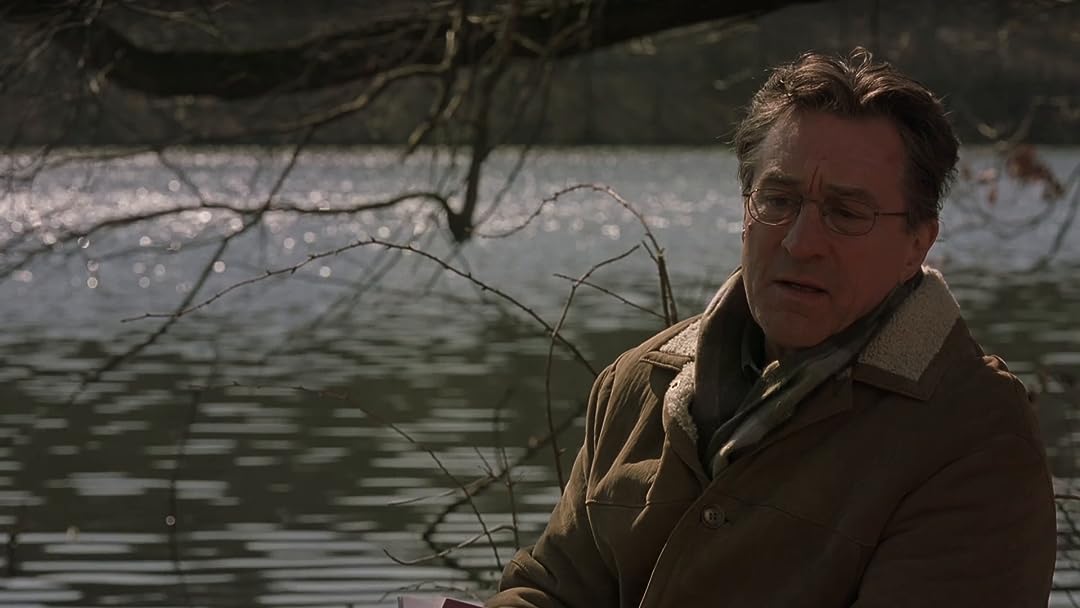 (1,179)
6.01 h 40 min2005X-RayR
For young Emily Callaway, her games of Hide-and-Seek with an imaginary friend named Charlie have become anything but simple and innocent. Instead she finds herself in the middle of a series of increasingly nightmarish acts that even her father David cannot stop.

Michelle Reviewed in the United States on November 1, 2017
4.0 out of 5 stars
I liked it a lot.
Verified purchase
Id give it 4 and a half stars if I could it's not going to be on my top 10 but I thought it was very well done psychological thriller . Very well acted I mean Dakota Fanning is amazing . At such a young age she was absolutely incredible . Don't let the negative reviews deter you and be careful which reviews you read because many contain spiilers. Without warning. This is my kind of horror movie it's not a slasher and there's not a high body count which is perfectly fine it's more of a psychological thriller. I thought the plot was good maybe it has been done before but I haven't seen those other movies . And even though I had read up on this movie years ago and knew that there were some major spoilers and had a good idea the way the spoilers went, it had been so many years I couldn't remember the details and I still was able to enjoy the surprise even if it wasn't a COMPLETE shock to me. If you don't know anything about the movie you should be pretty well shocked by the plot twists. It keeps you guessing. "is it the little girl?" "is it someone else?" "is it supernatural?" I would say quite suspenseful. Worth a watch . I decided to finally see it Halloween night when I was home alone trying to think of some good spooky movies to watch that were more my style than the old slasher Classics which isnt my thing. I've been a huge fan of Dakota Fanning especially in her younger years and so I figured it was worth a watch I think I'm going to finally watch the sixth sense now too, even though I totally know the plot twist on that one it still looks like it could be a good movie too.
13 people found this helpful

ProfessorReviewed in the United States on March 17, 2020
1.0 out of 5 stars
Absolute junk
Verified purchase
I know that famous actors need to make big money to support their lavish lifestyles, but I find it hard to believe that Robert DeNiro needs money bad enough to take a role like this.

Although the film is derivative and cliched, it does somewhat hold your interest until the last third. Then it goes so far off the rails, I can imagine audiences in the theaters groaning out loud. I certainly groaned watching it at home. Not to mention the money I flushed down the toilet renting it.

I ignored the one star reviews from the movie critics, figuring that if it stars DeNiro, how bad could it be? Well, it's bad. I mean, really bad. Unforgivably bad. Plot holes galore, questionable stuff that is never explained, horror movie cliches in abundance......Just plain rotten.

Christina ReynoldsReviewed in the United States on November 2, 2020
3.0 out of 5 stars
Stands On The Diving Board of Greatness - But Never Jumps
Verified purchase
Thank you for reading in advance

Hide and Seek is a 2005 American horror film starring Robert De Niro and Dakota Fanning. It was directed by John Polson. In the aftermath of tragedy, Strange events plague a widowed psychologist and his daughter who claims her imaginary friend - ‘Charlie’ - is real.

Generally speaking, horror movies are not my friend. I am the biggest scaredy-cat alive, and because of that I spend a lot of time preparing for jump-scares and sometimes I find that this distracts from the overarching plot. With that in mind, ‘Hide and Seek’ has moments here in there that will catch an audience member by surprise, but the majority of the time suspense and speculation are used to create an otherwise “creepy” atmosphere. If you're looking for a film that doesn't depend on gimmicky visual effects to startle its viewers then we’re off to a good start and you've come to the right place.

Sadly, you won't be in the right place for a long.
It would be fair to say that this film has a lot of potential, but as the storyline develops it becomes painfully predictable and ultimately beats the dead horse that is the plot to death. Characters are haphazardly killed as a means to an end, and the overarching intrigue as it relates to processing trauma fades away like dust in the wind. Key scenes that could have been written to more explicitly touch on the complexity of emotions that could explain reasons for what is going on - like guilt and grief - are thrown out, compartmentalized, and waste away as fleeting moments that subsequently feel tacky and unresolved. On a good note, however, this is a fair reflection of one character's attempt to reconcile with the parts of individuals that are loved and the parts that are jagged and potentially harmful (Was this the director's intention? I don't know, but , let's just pretend it is. . . .) If curiosity is what provokes you to start watching this I certainly won't blame you, but just be prepared to do an astronomical amount of projecting and heavy lifting in order to make the experience of watching this film a notably meaningful one.

For the sake of ending on a positive note, the performances by De Niro and Fanning - especially Fanning - do well enough at combining the attributes needed to make their characters and the situation they are facing at hand seem conceivable and believable. De Niro is just the right amount of ambiguously suspicious and conspicuously charismatic. Fanning is equal parts perplexed and certain about the warped sense of reality she finds herself unwillingly wrapped inside of with little chance of escaping. Regardless - even these performances seem to conjure the bare minimum of effort to chug from point A to point B, and it is hard to say whether this is in some ways directly related to or even a result of my previous point above. ‘Hide And Seek’ is a cage and its cast members are like mimes: Desperate to get out with little resources made overtly available to them

Surprisingly enough, I did actually enjoy this film - but I use that word extremely loosely.
The subject matter contained is inherently provocative, but it is handled rather recklessly and comes to a full stop once the conclusion reveals itself in a way that is both disappointing and particularly lethargic.
Overall, I conclude that watching this film at least once if the opportunity happens to fall in your lap wouldn’t be the biggest waste of time, but do keep in mind - what this film ends up being and what this film could have been are on completely different planets

Jaime ContrerasReviewed in the United States on December 1, 2019
4.0 out of 5 stars
Somewhat preciatble but very creepy
Verified purchase
Robert DeNiro and Dakota Fanning carry this psycho=terror film about grief and recovery over a death. It starts out as a drama, drops to a ghostly tale of terror, and climaxes in a full blown tale of a psycho-thriller. Throughout the film, DeNiro's character seems in control but is he. Fanning shines as the terrified daughter. Famke Jansen is strong as the child psychologist who is torn between her friendship to DeNiro's psychiatrist character and his daughter's obvious emotional instability. This was good but uneven at times.
4 people found this helpful

Avid readerReviewed in the United States on November 19, 2020
4.0 out of 5 stars
Trauma causes pain
Verified purchase
Very well crafted. Robert De Niro plays David, a NYC psychologist, and Dakota Fanning plays his daughter Emily. Early on, Emily witness a very traumatic event, and David takes her to a large upstate house to try and help her get over the trauma. Emily gets a friend, Charlie, and it seems Charlie is not a good person. David decides that Charlie is imaginary, as a coping mechanism for Emily. Bad things happen, and Emily blames that on Charlie. The whole story is done very well, and superb performances, especially by Dakota Fanning.

Amazon CustomerReviewed in the United States on November 17, 2020
2.0 out of 5 stars
cheap tricks and thrills
Verified purchase
i kept asking Whaaat?? throughout most of this movie. it leads you down this path and leads you down that path and then goes completely off the rails. i generally dont mind movies that are unpredictable, thats kinda the essence of a thriller. but the plot holes in this movie are ridiculous. the twists are there just to have them even though they dont really make sense... and i hated the way it played off Cape Fear. Robert De Niro, you shame on you.

NewbieReviewed in the United States on October 16, 2020
2.0 out of 5 stars
If it wasn't for...
Verified purchase
If it wasn't for robert d. I would have not watched this at all. And I actually regret it still despite my favorite actor. It was boring for a thriller movie. The ending was awful. They should have just showed him wounded and locked up in a crazy hospital you know. The girl had a normal father she loved all these years until he loses his marbles over his wife cheating, and then what it doesnt faze the girl at all for him getting killed just like that, nahh. End sucks.

FilmGluttonReviewed in the United States on August 30, 2018
5.0 out of 5 stars
Perfect twist!
Verified purchase
As a psych major entering their master's I cannot even begin to explain how psychologically perfect that twist really is. Ignore the negative reviews, this film is great!
8 people found this helpful
See all reviews
Back to top
Get to Know Us
Make Money with Us
Amazon Payment Products
Let Us Help You
EnglishChoose a language for shopping. United StatesChoose a country/region for shopping.
© 1996-2022, Amazon.com, Inc. or its affiliates