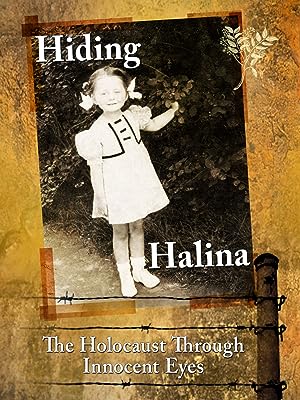 (52)
1 h 8 min201013+
9 out of 10 Jewish children perished during the Holocaust. "Hiding Halina" is the amazing story of a little girl who beat incredible odds. Told from the point of view of a child, critics agree this is unlike any Holocaust doc you've seen!

Me2Reviewed in the United States on February 13, 2021
5.0 out of 5 stars
Powerful story
Verified purchase
Listening to Halina's calm voice captivated me from the beginning; she spoke so calmly, so assuredly, measuredly, as she described her memories....... I was struck by her childhood memories of "normal" bc she'd never known anything else. That was a tragedy in itself..... barbed wire, seeing the outside, but knowing you could not go out there, that silence was more than golden.... it meant staying alive.
Her account is so powerful & I hope this film reaches millions going forth; her mother was labeled the "Black Crow" because she "got it" (about what she'd heard of mass deportations & murders) while others around her ignored the signs, and were in denial.
I am disappointed (as Halina appeared to be also) that as she visited places from her childhood there were absolutely NO plaques, NO markers, NOTHING to note what had taken place at those locations. How painful for her to have those vivid memories which were vapors to the people passing by those places everyday.
All I could think of was the saying, "those who don't learn from history are doom to repeat it."
In the US folks are tearing down monuments/statues/plaques and thereby destroying history; better to ADD to those monuments with more complete history rather than try to wipe it out.
That's what I see from Halina's journey tracing the places where she and others like her endured such hell.... the newer generations don't want reminders. Just wipe it away..... when Halina's gone, there may be no one else to even know.
Thank you, Halina, for taking that brave journey retracing those places & giving us insights that only you could give. What a survivor! What a wonderful woman!

lawyeraauReviewed in the United States on May 22, 2021
5.0 out of 5 stars
A COMPELLING DOCUMENTARY AND BEAUTIFUL NARRATIVE…
Verified purchase
This is a beautifully narrated story about a Holocaust experience from the point of view of a child who managed to survive it. Halina was born in 1937, so life in the Jewish ghetto in Poland was all that she knew as a very young child. Her recollections are so personal and beautifully told by Halina herself, a very attractive woman in her seventies at the time that this documentary was filmed.

Halina returns to the places where she lived during the war and walks the viewer through her experience. In a well modulated voice, Halina tells the viewer what her parents did to keep her safe and ensure her survival. She describes those experiences, and they were in some measure unique. It was both interesting and heartbreaking to hear of them. This really is a very unique and compelling documentary.

ArdenulReviewed in the United States on January 28, 2021
5.0 out of 5 stars
A moving story, beautifully told
Verified purchase
Halina Irving tells about her childhood experiences of survival in wartime Poland and Hungary in the places where they happened. Her story is moving, and will do more to bring home the reality of the Holocaust than all the statistics and documentaries you've seen before.
2 people found this helpful

HoneygirlReviewed in the United States on August 19, 2021
5.0 out of 5 stars
Well done survivor's story
Verified purchase
#NeverForget lest we repeat these atrocities.
Well done Halina and family. So sorry you have this story to tell but thank you for passing it on so we can be witness to you, your family and all the other needlessly murdered by the insane regime. Long happy life to you all.

cayrncoleman@yahoo.comReviewed in the United States on October 1, 2021
5.0 out of 5 stars
Good historical news
Verified purchase
It’s always interested me
See all reviews
Back to top
Get to Know Us
Make Money with Us
Amazon Payment Products
Let Us Help You
EnglishChoose a language for shopping. United StatesChoose a country/region for shopping.
© 1996-2022, Amazon.com, Inc. or its affiliates