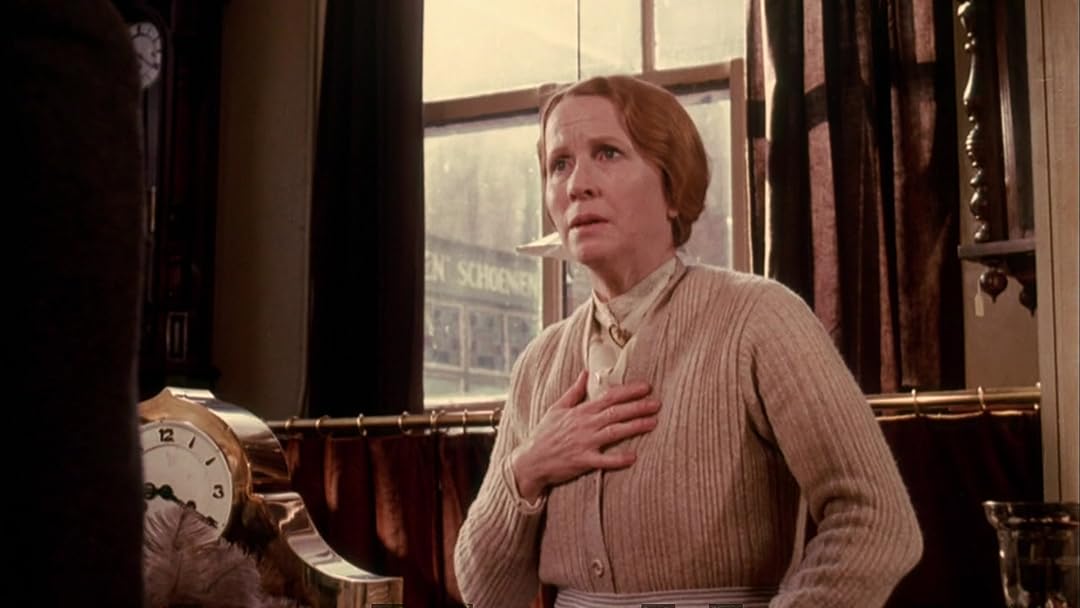 (863)7.52 h 26 min197513+
In wartime Holland, the Ten Boom family joins the underground resistance to help save persecuted Jewish families and quietly shelters Jews in their small house - until Nazis discover the "hiding place." When they are arrested and imprisoned in concentration camps, they're left with nothing to cling to but their faith. This is the remarkable true story of Corrie and her sister Betsie's endurance.

mositaReviewed in the United States on June 22, 2018
5.0 out of 5 stars
There is No Pit Too Deep Where God Cannot Find You!
Verified purchase
I saw the movie, "The Hiding Place", and then downloaded the book onto my android device. Both movie and book are marvelous. These ladies, Corrie and Betsie Ten Boom suffered such great hardships during the WWII Nazi occupation of Holland and still managed to retain their love of man, faith in God, and forgiveness even to those people who were very cruel to them. Betsie died in the concentration camp and Corrie was released because of a clerical error one week before the women of her age were sent to the gas chambers. God had a plan and a mission for her, and she succeeded in following His path. I cried during the movie and during the book. Very inspiring and beautifully written. I strongly recommend it to anyone who wants to meet people of faith. Thanks Amazon for having both the movie and the book on Prime.
36 people found this helpful

Tammy M HowellReviewed in the United States on February 19, 2014
5.0 out of 5 stars
Amazing Movie About Real Love And Forgiveness in the Face of Hideous Cruelty and Suffering
Verified purchase
This is a riveting account of a well-off family who became convicted because of deep faith in Christ to hide Jewish people and families from the Nazis. They were eventually discovered and imprisoned. The movie is enacted extremely well - very excellent cinema compared to those "faith-based" films produced today. Think instead of the Shindler's List - there are quotes and images from the movie which will echo in your brain for days. This is a true story and there is no sugar-coating of the pain or sorrow in this movie, and yet is one of the most singularly uplifting and inspiring stories you will ever hear or watch. I am tempted to give spoilers, because there is a great deal of intense drama and action, but I won't; I'll just challenge that this is a movie worth renting and owning.

As a small child, I had the privilege of having Corrie Ten Boom visit my church. She was a tiny person, but she seemed to loom like a giant in her presence. She was so completely at peace and centered in her faith in God and in Jesus Christ. She became one of the chief role models for my life.

kathleen andersonReviewed in the United States on July 26, 2020
5.0 out of 5 stars
A Treasure for Always
Verified purchase
Whilst searching for something to watch on Amazon Prime, the gentle face of Miss Corrie ten Boom showed up on the big screen...my heart leapt with a sense of familiarity. "Oooh," I thought to myself, " I remember reading her books as a child!" Her kind face with that knowing smile, exuding her quiet faith-based inner-strength.
Miss ten Boom's stories have left lasting impressions as her books were passed around, deepening our personal faith in the Holy Spirit.

We hadn't realized there was ever a film made. how delighted we are to have had this opportunity to tune in today. Thank you, Amazon, for having this available for us to view and reflect upon, especially during these extra-ordinary times when it can be easy for some people to falter in their faith. This film is worth the recommendation for for a group and/or family downtime.

In closing, during a brief stop in Amsterdam, years ago, the queue to Anne Frank's House was a very long one, imagine the disappointment of not being able to enter after two days' effort. Now, this has ignited a reason to travel to visit not just The Frank's, but the ten Boom's as well.

MarkReviewed in the United States on August 11, 2020
5.0 out of 5 stars
"Even lice..."
Verified purchase
For the first third of this movie, I was thinking to myself, "Well, this is nice. A powerful film with a strong message but without all the grimness and horror that one usually finds in a movie about... OH, DEAR GOD! THERE IT IS!" And suddenly grimness and horror is abundant. How could it not be, given the subject matter? In this masterfully crafted movie, though, the unpleasantness, while extreme and infuriating, never feels gratuitous. It serves the point, which really comes through in the end. Just a great flick all around, and acted to perfection across the board. In the overcrowded Holocaust niche, this one manages to stand out. It's one that will stick with you a bit.
4 people found this helpful

Joan AndersonReviewed in the United States on September 10, 2020
5.0 out of 5 stars
God is always with us
Verified purchase
The Ten Boom family took the high road willing to risk their lives for others. Only one survived to tell the story. So powerful. I doubt I would have the courage to take those risks, and I hope that the world will never see another Hitler. The Great Commandment in the Bible is to love God with all our hearts and our neighbor as ourselves. Acting on this calling, leaders always rise in every age to light the way: Gandhi, Mother Theresa, Martin Luther King, Jr., Rep. John Lewis. Thank God for these people of courage and faith.
4 people found this helpful

Christian.Reviewed in the United States on May 1, 2019
5.0 out of 5 stars
Excellent Product
Verified purchase
I had the pleasure of seeing an interview with Corrie Ten Boom in the mid 1960's. This dear woman endured trials as none of us could imagine. This movie was a depiction of her life before, during, and after the Nazi's "cleansing" of the Jewish people, and those who risked their own lives to hide them. A very intense movie which also gives us hope in Christ Jesus!
8 people found this helpful

M.J. Von HeggerReviewed in the United States on October 4, 2021
5.0 out of 5 stars
TenBoom family struggled, against mighty powers in this dark world.
Verified purchase
For we are not fighting against flesh-and-blood enemies, but against evil rulers and authorities of the unseen world, against mighty powers in this dark world, and against evil spirits in the heavenly places.
Again He said to them, “I am going away, and you will look for Me, but you will die in your sin. Where I am going, you cannot come.”

22So the Jews began to ask, “Will He kill Himself, since He says, ‘Where I am going, you cannot come?”
23Then He told them, “You are from below; I am from above. You are of this world; I am not of this world. 24That is why I told you that you would die in your sins. For unless you believe that I am He, you will die in your sins.”
25“Who are You?” they asked.

“Just what I have been telling you from the beginning,” Jesus replied. 26“I have much to say about you and much to judge. But the One who sent Me is truthful, and what I have heard from Him, I tell the world.” (John 8:21)

C. LongReviewed in the United States on January 20, 2013
5.0 out of 5 stars
Make sure you get the right DVD!
Verified purchase
For some reason, Amazon seems to show a VHS picture and incorrectly list as 1.33:1 (non-widescreen) for the WESSCOTT MARKETING DVD. This is not correct. I own the Wesscott DVD and it is both remastered and in widescreen. It also comes with a 2nd DVD of great bonus material including a 1-hour "behind the scenes" extra, which despite its name is really mostly additional backstory to the events shown in the movie (which even uses numerous scenes that were not in the actual film), as well as several shows that were done with Corrie in her later years that are really neat to see (she was an interesting lady that clearly loved the Lord). I recommend this version over the Billy Graham DVD release and especially over the VHS. The remastering was fairly decent for such an old film too. Just to clear up any confusion, the UPC # of the Wesscott DVD I have is 731635002106.

As for the movie itself:

Produced in 1975, this is a GREAT movie that is well worth a watch. This movie showcases in clear visual terms what it means to put your Christian faith into action and to trust God even when times look very very dark.

If you don't know Corrie ten Boom's story, it is one not to miss and this movie is an excellent place to start. I don't want to give away too much from the movie, but Corrie's faith (and indeed the entire family's faith) is certainly tested in very significant ways. I think most of us, even though we know that horrible horrible things happened at the hand of the Nazis, find it easy to forget just how horribly evil that evil can be. This film, though definitely sanitized, once again reminds us of the evil that lurks within men's hearts (often behind-the-scenes, just waiting for an opportunity to burst out). For those with children, you do need to know that this is an intense film due to its subject matter and deaths do occur in the movie. I would say probably 11/12ish is probably the youngest appropriate age. There's plenty of great family discussion topics that can be gleaned from this movie.

Like a number of other Christian movies, this movie does have a reasonably strong undercurrent that whatever God allows in our lives must be His will for us (because the logic dictates that if it wasn't His will, He wouldn't allow it to happen). I'm much less inclined towards that view these days as I see a distinction between God allowing something (i.e. not stepping in to change what humans or the devil is doing) and God's actual desire for us. I believe God can WANT *NO* Nazi concentration camps with hurt and suffering (i.e. that be His will) and yet, allow the course of events to play out. If God always interceded in our affairs according to His will, it would be Heaven on Earth now and our choices as humans would be of no effect. There's definitely a mystery to it all. But this movie, mirroring the thoughts of many Christians, does have that undercurrent that if we experience pain and suffering, then it must be because God wants us to experience it. With that said, this movie does showcase what tough faith looks like even when you don't understand the "why" and ultimately we see how God uses all that happened even to reach many through the telling of Corrie's story.

This is definitely a worthwhile movie.

Chris Long
MoviesForChristians Movie Reviews
laughandlift dot com/moviesforchristians
33 people found this helpful
See all reviews
Back to top
Get to Know Us
Make Money with Us
Amazon Payment Products
Let Us Help You
EnglishChoose a language for shopping. United StatesChoose a country/region for shopping.
© 1996-2021, Amazon.com, Inc. or its affiliates