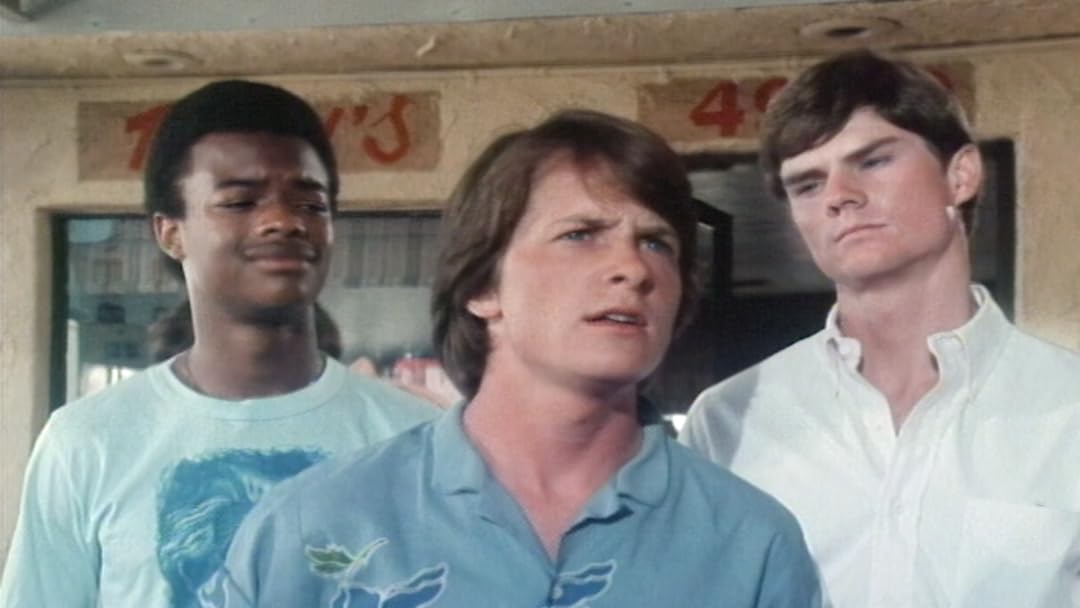 (38)5.61 h 36 min198313+
Excelsior Union High senior J.J. Manners navigates the cliques and rivalries that high school entails, all while pursuing Beth Franklin, who happens to be the girlfriend of the quarterback and class president, Beau Middleton. When the animosity between J.J. and Beau reaches its boiling point, there's only one way to settle the vies for Beth's affection: a drag race.

RussReviewed in the United States on August 28, 2021
5.0 out of 5 stars
Classic Cheese
Verified purchase
All the 80s A and B class tv, movie celebs in this one. Even 3 of the Original leave it to Beaver cast leave their marks in this one. Good classic for all ages

el capitanReviewed in the United States on February 8, 2019
4.0 out of 5 stars
Recommended
Verified purchase
Was good to see Michael J. Fox when he real young. Had the Marty McFly in him even then.
One person found this helpful

SalReviewed in the United States on October 11, 2018
5.0 out of 5 stars
Just a fun movie
Verified purchase
This one's a blast to watch. Staring some of the best teen stars of the period, this film will make you laugh and remember the 80's.
3 people found this helpful

Richard StoneReviewed in the United States on June 21, 2021
1.0 out of 5 stars
Not a USA DVD wi not play!
Verified purchase
Not a USA PLAYABLE DVD!

THSReviewed in the United States on April 12, 2018
2.0 out of 5 stars
I graduated in 1983 from HS, this is not even close except for the hair and clothes
Verified purchase
a who's who of duds
3 people found this helpful

JerryReviewed in the United States on October 12, 2017
1.0 out of 5 stars
Disappointed
Verified purchase
This one would not play on my dvd player.
It is ok, I will give it to someone who has a different player.
One person found this helpful

B&S About MoviesReviewed in the United States on October 3, 2018
3.0 out of 5 stars
For the kids!
Once upon a time, when network TV actually mattered, they'd gather all of their stars once a summer and put them in a TV movie. Or they'd grab the cast of Facts of Life and send them to France. It was a big deal to me when I was a kid. And there are kids growing up today that will have no idea how exciting it was knowing a 2 hour TV movie with all of your favorites was about to air. Even better - when stars of the past crossed over with the hottest stars of the present, I was always hooked.

Originally airing on October 16, 1983 on NBC, this film is all about Excelsior Union High School, where Beau Middleton (Anthony Edwards) rules over everyone as class president and quarterback. His father is even offering a $10,000 prize for best teacher, so every single one of them is trying to outdo one another.

J.J. Mathers (Michael J. Fox), however, is one of the few students to stand up to the preps. He's never cared about anything before. That is, until he met Beau's girlfriend, Beth Franklin (one of my first crushes, Nancy McKeon).

This one is packed with so many great stars. There's a super young Crispin Glover two years before Back to the Future, playing a geek. Tony "Wally Cleaver" Dow, Frank "Lumpy Rutherford" Bank and Ken "Eddie Haskell" Osmond from Leave It to Beaver are in this, as are Elinor Donahue from Father Knows Best, Dwayne Hickman, Steve Franken and Bob Denver from The Many Loves of Dobie Gillis, Todd Bridges and Dana Plato from Diff'rent Strokes, Crystal Bernard (years before she'd be on Wings and in Slumber Party Massacre 2), Angela Cartwright from Lost in Space and The Danny Thomas Show, Jon Gries (who wasn't just King Vidiot in Joysticks, but also Uncle Rico in Napoleon Dynamite, Lazlo in Real Genius, O.D. in TerrorVision and the Werewolf in Monster Squad), Lauri Hendler from Gimme a Break, Barry "Ernie" Livingston from My Three Sons, the last surviving Munchkin (until May 24, 2018) Jerry Maren, David Nelson from Ozzie and Harriet, Cathy Silvers of Happy Days, Tom Villard (you know how much I love to get a Popcorn reference in) and Dawn Wells from Gilligan's Island (but also from The Town that Dreaded Sundown). If you like spotting actors and wondering where you know them from, this is the movie for you.

It was directed by Rod Amateau, who has plenty of TV directing and production credits for shows like Dukes of Hazzard, Supertrain, the Dukes' spin-off Enos, My Mother the Car, a failed TV series pilot for the Kenny Rogers vehicle Six Pack that didn't star Kenny Rogers and The Garbage Pail Kids movie. Mr. Amateau even did stunts in Rebel Without a Cause and Mighty Joe Young.

This was so successful that a one-hour pilot for a regular series was made and aired on May 26, 1984. According to Mystery Science Theater 3000 creator Joel Hodgson, he was going to be one of the stars of the series but turned down the offer as the material wasn't very good. The network thought he was just playing hardball and upped their offer. This is when he realized how shallow Hollywood is and left town.

It's kind of funny to see Anthony Edwards be the rich villain when he's so well known for being on the other side in Revenge of the Nerds. It's not the greatest movie you've ever seen, but if you're looking for something to make you happy at 2 AM on a drunken Saturday night, it's there on YouTube just waiting to be watched.

THGReviewed in the United States on January 7, 2019
5.0 out of 5 stars
Fun movie. Plenty of interesting characters
good
One person found this helpful
See all reviews
Back to top
Get to Know Us
Make Money with Us
Amazon Payment Products
Let Us Help You
EnglishChoose a language for shopping. United StatesChoose a country/region for shopping.
© 1996-2021, Amazon.com, Inc. or its affiliates