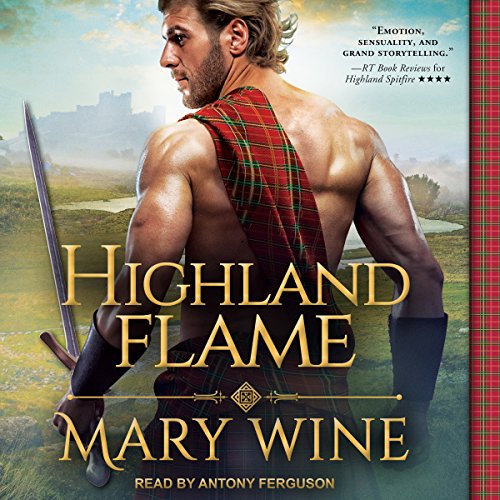 Laird Diocail Gordon has just come into his title and inherited his father's run-down castle and rag-tag clan. He knows the sorry sight of the castle would send any woman running, but is determined to find a wife to help return his home to its former glory.

Widow Jane Stafford is on a mission - return to England even if it means trudging through the Scottish Highlands on foot. Her travels lead her straight to the path of danger until a mysterious, brawny man comes out of nowhere and saves her - and the spark between them is immediate. With a target on Jane's back, she knows the only way to stay safe is to go with Diocail. But the real trouble will be guarding her heart from her newly ignited Highland flame....

Special invitation from Audible!
Learn more about Membership
List Price: $30.09
You Save: $4.14 (14%)
By completing your purchase, you agree to Audible’s Conditions Of Use
Sold and delivered by Audible, an Amazon company
Share

4.5 out of 5 stars
4.5 out of 5
122 global ratings
How are ratings calculated?
To calculate the overall star rating and percentage breakdown by star, we don’t use a simple average. Instead, our system considers things like how recent a review is and if the reviewer bought the item on Amazon. It also analyzes reviews to verify trustworthiness.
Top reviews

Wonder Woman
5.0 out of 5 stars The New English Widow vs. The New Scottish Laird
Reviewed in the United States on November 2, 2017
Verified Purchase
I'm always happy to see a new book out by Mary Wine. Her books grab my attention and hold it hostage in an adventurous hot way. Highland Flame was no different in that sense. I will say she did take a different approach with the storyline then she normally does, but I was still pleased. The two heroines were definitely forced to get married as usual, but the antagonist were different then the kings right hand man enforcing his will on the couple. There was also a much closer relationship and kinship within the Gordon Clan then what is normally seen. Jane and Diocail had common forces against them, and that helped them to understand each as individuals. Also, because they had both received New titles and positions that completely began changing their lives, they were able to stand together on common ground in that way as well. The communication between them was with respect and empathy. I enjoyed the fact that their love story was not rushed and we, the readers, could see the development of their love story. It was also nice to see in the end what happens to them down the road, and I liked how Wine intermingled the next book's characters into the story. Usually authors will write a snipet of their next book at the end of a book as a teaser. I'm excited that I have Brenda' s story to look forward too, and hopefully her cousin will meet someone also and have his own book. It's been 4 or 5 years since his beloved Tara passed away, so hopefully someone amazing in every way will distract him and hold his attention. Definitely grab this book, the only thing that will disappoint you about this book Is it's not long enough.
Read more
5 people found this helpful
Helpful
Report abuse

E Spock
5.0 out of 5 stars Castles and Kilts and Stubborn Scots-who-just-want-to-love-and-be-loved, oh my
Reviewed in the United States on September 16, 2017
Verified Purchase
This is probably one of my favorite books by Mary Wine. There are so many Highlander books out there that you think everything has been done before, but this unique story was both fun and heart wrenching; the read was an immersive experience both into the setting and era, but into the hearts of the main characters. Without telling too much about the outcome, both Diocail and Jane have complete journeys of identity, finding themselves as they find each other, all against the background of a crumbling castle and huge kilted men acting both like old women at times and five-year-olds at others. I laughed and winced and blushed and, ultimately, couldn't put the book down.

I still don't know how to say Diocail (but in my head it's Doy-kale and that's not sexy. I'm going to look it up now... Okay, it's pronounced JU kel and I was nowhere close, but it sounds better.)
Read more
9 people found this helpful
Helpful
Report abuse

Sandy Milan
2.0 out of 5 stars Dreadful
Reviewed in the United States on November 24, 2018
Verified Purchase
I have read many books by this author in the past and I'm really shocked by this one. Firstly, I really do detest stories where the h refuses to get married/wants marriage annulled to an annoying extent. This went on for most of the book (it felt like) and reminded me of why I stopped reading Grace Burrowe's books. Normally I love marriage of convenience stories but this is not a good one. The H becomes laird of his clan with a fair amount of opposition. His close friends advise him to get married so that his wife can set the castle to rights. He comes across the h after she's left stranded in her shift after her late husband lost everything while gambling at a local inn. The h is also English so this is against her with the Scots. She's eventually persuaded to go back to the H's castle but all the while she is resisting and she's eventually tricked into marriage. Then she harps on about getting the marriage annulled. When she's kidnapped by the H's enemies within the clan, no one believes her and she's is treated very badly by the H. He publicly shames her in front of the clan. It just wasn't a good story.
Read more
3 people found this helpful
Helpful
Report abuse

TracyJane
5.0 out of 5 stars Loved this book
Reviewed in the United States on September 5, 2017
Verified Purchase
I really enjoyed this book - Mary Wine is such a great author, she is able to draw me in from the first page and hold me captive until the last.

The story opens with Jane being cast out of the inn she was staying in with her husband in just her shift. Her husband was killed and the innkeeper took all her possessions as payment due, he cast her out when she refused to sleep with him to cancel the debt. She is determined to return to her father's house in England, so she sets out walking, but unbeknownst to her - she is going the wrong way.

Diocail is the new laird of the Gordon clan, he was the nephew of the former laird - a stingy, mean man who was murdered - but his clan is torn, many would be happy to overthrow Diocail and his household is a mess. To escape the strife, he leaves to go with his men to collect the rents. His men have encouraged him to take a wife who can set the household to rights. They figure if the men are feed and keep is in order, Diocail will have an easier time winning over the clan.

These two meet when Diocail save Jane from some ruffians bent on raping her. As grateful as she is, Jane does not want to stay with Diocail - a fact that she repeatedly tells him. When the opportunity arises, Jane makes a run for it - only to be captured and taken to be hung as a spy! When Diocail intervenes to save her (again) the crowd demands that he marry her.

They marry but Jane is still determined to go home to England and plans to have the marriage annulled. Diocail recognizes Jane's worth and will not let her go easily. She is appalled by the state of the keep when she arrives and immediately begins to set things right. Diocail is more convinced than ever that Jane belongs with him. Slowly Jane begins to admit that she is happy with Diocail and just when it seems like these two are headed for a HEA, Ms. Wine throws the reader a curveball.

Not everyone is happy with Jane or with Diocail for that matter. So when Jane disappears, Diocail assumes the worst and refuses to believe that Jane did not leave him. Both Jane and Diocail are stubborn and when they engage in a battle of the wills - I was hard pressed to decide who will be the victor.

I would highly recommend this book, it is the fourth in the series, but it could easily be read as a stand alone title.
Read more
3 people found this helpful
Helpful
Report abuse
See all reviews

M,WHITWORTH
5.0 out of 5 stars Great
Reviewed in the United Kingdom on August 3, 2018
Verified Purchase
❤️❤️❤️❤️❤️
💋💋💋
This is a great book and a greater series,
Funny , adventurous, eventful, feisty , brutish.
It covers just about anything you want from a good highland romance .
Read more
Report abuse

Rosewood
5.0 out of 5 stars A Keeper
Reviewed in Canada on September 9, 2017
Verified Purchase
I enjoyed this novel, the fourth in the series and I so hope there will be more - Diocail as Laird and his immediate crew of warriors are so entertaining as they strive to get Jane, a woman they meet in trouble, to marry, consummate, and overcome years of neglect at the Gordon tower - the characters and plot are outstanding with enough humor to keep the story light and fun - a must read just for the hilarious last chapters alone
Read more
Report abuse

The Hillbilly Hiker
5.0 out of 5 stars good quality, and good value
Reviewed in Canada on June 2, 2018
Verified Purchase
Item was exactly as described, good quality, and good value. Delivery was prompt, and price was exactly as quoted. What more can a customer ask for?
Read more
Report abuse
See all reviews
Back to top
Get to Know Us
Make Money with Us
Amazon Payment Products
Let Us Help You
EnglishChoose a language for shopping. United StatesChoose a country/region for shopping.
© 1996-2022, Amazon.com, Inc. or its affiliates