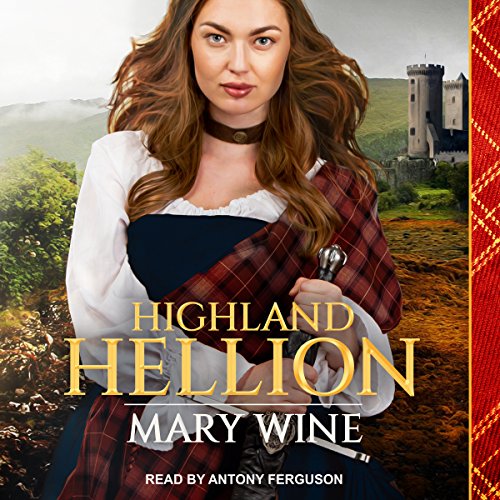 List Price: $30.09
You Save: $4.14 (14%)
By completing your purchase, you agree to Audible’s Conditions Of Use
Sold and delivered by Audible, an Amazon company
Share

Wonder Woman
5.0 out of 5 stars Standing up for yourself and your man!!
Reviewed in the United States on June 19, 2017
Verified Purchase
If you refused to be pushed around by a man you're a hellion. If you choose the man you want to marry you're a hellion, and if you can physical protect yourself against a man; you're a hellion! In 1578 in Scotland you were a hellion if you used your brain for anything other than what the men in your life told you to use it for. So, Katherine(a.k.a., better known as Kat) took the title, hellion, proudly and went by it with her head held high.

Kat began at 14 taking control of her own destiny by learning how to fight, and perform just as good as her male peers. Then at 20 all that training put her to the test, and she not only had to fight as good as men she had to out think them as well. She quickly found out in a man's world she was just a pawn to achieve gains, titles, and whatever else could be bartered for her. Kat could either accept man's fate for her, or she could stand up for herself and create her own destiny.

Luckily, there were a few men who applauded her strength and loyalty, and Kat was quickly building an allegiance with her number one enemies, men. There was one man who noticed all her great attributes, and he wanted her just the way she was, a hellion. Rolfe, quickly found himself hypnotized by her bewitching skills, and her strength only made him want her more. He was honorably ready to give his life for Kat, go against his dad's wishes, and deny the regent, Morton, an opportunity to arrange an unwanted marriage so he could make some money.
Rolfe was smitten and so was Kat. Neither one of them could walk a way from each other, and they surely couldn't keep their hands off each other.

I'm thinking, if anything I have said has caught your attention... don't just stand there! Jump up, and speed to the store to get Mary Wine's lastest adventurous story.
Read more
6 people found this helpful
Helpful
Report abuse

muse
5.0 out of 5 stars Exciting and Outstanding!
Reviewed in the United States on June 27, 2018
Verified Purchase
I’m not sure why some reader’s claim Catherine was just a spoiled, spiteful brat without any redeeming qualities. She actually WAS capable of learning from her mistakes and proved it more than once. The fact that she was capable of making sound decisions, yet was dismissed by far to many men was the basis for her “hellion” reputation.

I have to admit that Catherine was able to remain honest enough to admit her errors even as she was actively dealing with consequences. THAT is something I’m still trying to learn! When the hero lost his wits and attempted to “fix” his chosen bride I truly began to hate him. Thankfully, he seemed to realize his mistakes fairly quickly. This story absolutely captured my attention and held it throughout the entire book. This is one book I will happily recommend!
Read more
Helpful
Report abuse

NavyWave62
TOP 1000 REVIEWER
4.0 out of 5 stars GOOD SERIES!
Reviewed in the United States on February 23, 2018
Verified Purchase
i've read the other two books in the series, but probably read 30-40 books since the last one. Since I only remember tiny parts, I can say this is a stand alone.

Our h is a Hellion, which we are reminded of often, but she doesn't learn from her mistakes. Our H knows immediately she isn't a lad, but the men she has trained with for 6 years, didn't realize it? REALLY?!?!?

The Lord's name is used in vain so be warned.

I lowered a star because the h though loyal, kept doing things to either endanger herself of those around her. Something happens near the end that has to do with our H, that was rushed and I felt the man they duped would have acted with more vengeance than he did.

Our H is a great character, loyal, honored bound and never appeared as a wimp to me, but strong.

There is suspense, and great secondary character's. We have mildly described lovemaking -heat level maybe 4 out of 5, within marriage, but not through the whole book.
We are treated to HEA, no cliffhanger and a glimpse of less than a year in the future, which was nice to see.

I am not going into the premise, as many have explained it in detail better than myself. Just what you may discover reading it for yourself. I did enjoy book 2 too (ljb)
Read more
One person found this helpful
Helpful
Report abuse

Kindle Customer
5.0 out of 5 stars Highland Hellion
Reviewed in the United States on July 24, 2017
Verified Purchase
Here is another wonderful story by Mary Wine. The story is a girl trained in training yard with the men of the clan and trying to learn her place with clan. The hero trying to teach her a lesson about leaving the castle on her own. He saves her and marries her. The plots of Scotland and the recklessness of the heroine plus not starting a war because of her recklessness. I enjoyed reading this book. Mary Wine is a wonderful writer. I hope you will enjoy reading this book as much as I have.
Read more
One person found this helpful
Helpful
Report abuse

Lilllian D Borkowski
3.0 out of 5 stars I don't mind a female heroins but this one was a bit too sissyfied.
Reviewed in the United States on January 12, 2018
Verified Purchase
The heroin was "kinda" stupid in parts but wondering kept this reader waiting to see whether she gained intelligence - always love the Scottish background - whether she got better - and wanting to enjoy the overall writing. I like more history and - heck! I was a better outdoors woman than her. I could outcamp her and did great in the outdoors living - period I bet I could have out fought her, as well. We were taught defensive fighting and boxing AND dirty fighting. I brought one man to his knees once and wasn't sorry!
Read more
One person found this helpful
Helpful
Report abuse

Hss
4.0 out of 5 stars Great book
Reviewed in the United States on September 14, 2017
Verified Purchase
Kathrine carew been abducted to the highlands as she grew she became trained as a warrior till oneday all felt she was to grown and needed to be in a womans place. As the hellion she is takes of her is spread thru the clans of the english hellion . Till she meets her match by laird and son.

Good book funny at times and just kept me turning lages till done. I recommend this book to all whom love highlander novels
Read more
One person found this helpful
Helpful
Report abuse

Kindle Customer
5.0 out of 5 stars Loved this ebook
Reviewed in the United States on January 7, 2020
Verified Purchase
Have read all and even skipped to #4 ahead of #3. I liked this 3rd one the absolute best! Both main characters are wonderful. This book is a page turner and ends exactly as it should. So much fun and reading enjoyment. You cannot go wrong.
Read more
Helpful
Report abuse

M,WHITWORTH
4.0 out of 5 stars Good
Reviewed in the United Kingdom on August 2, 2018
Verified Purchase
❤️❤️❤️❤️
💋💋
A great book .
Full of adventure, fun and history.
What more could you want .
Love this series
Read more
Report abuse

Rosewood
4.0 out of 5 stars Needs some laugh-out-loud moments
Reviewed in Canada on September 8, 2017
Verified Purchase
#3 In the series - Katherine who was stolen from England as a child and saved by Marcus in book 2 of the series has grown up wild and independent - realizing that he has been too lenient with her Marcus sets down new womanly duties for her to learn - disgruntled Katherine takes chances in getting freedom that don't go as planned causing Rolfe McTavish to take her under his wing - this novel has adventure but there are so many subplots again going on - it is not necessary to start setting up the next novel, every novel can stand alone - but Ms Wine is a great historical author and pulls the story together in the end
Read more
Report abuse

Sa Ma
4.0 out of 5 stars Still a high recommendation
Reviewed in Germany on June 22, 2019
Verified Purchase
Like the previous books Mary Wine does not disappoint, Katherine however was sometimes a little annoying and I was a little disappointed that the book came to such a - it seemed - rushed end. The first two storylines left a feeling of better conclusion. The romance between these two was however still hot and they showed a good chemistry! All in all I still highly recommend book # 3 of the Highland Weddings series
Read more
One person found this helpful
Report abuse
See all reviews
Back to top
Get to Know Us
Make Money with Us
Amazon Payment Products
Let Us Help You
EnglishChoose a language for shopping. United StatesChoose a country/region for shopping.
© 1996-2021, Amazon.com, Inc. or its affiliates