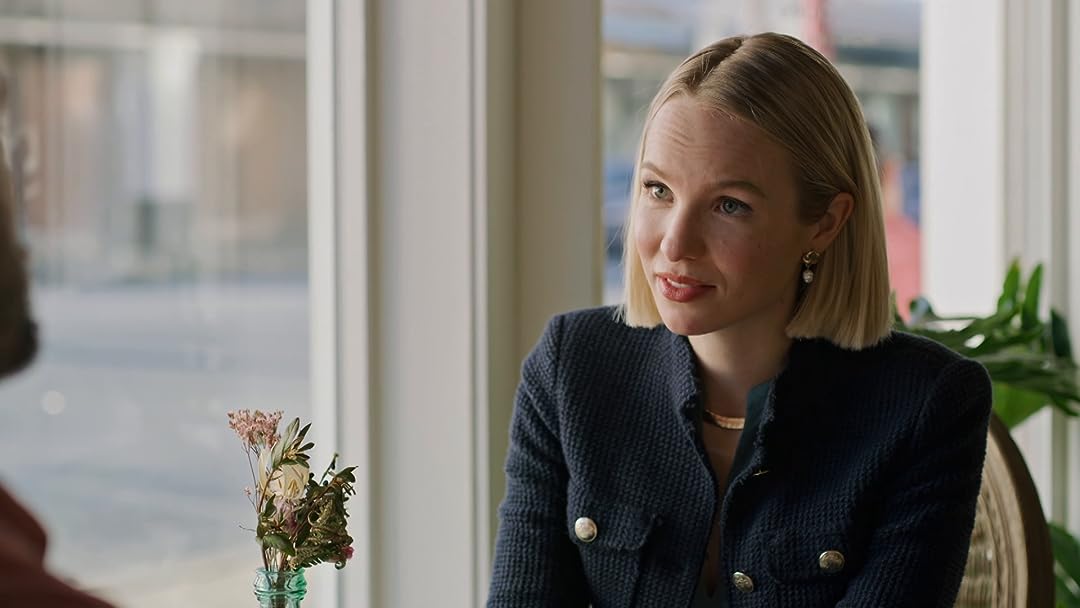 (5)
6.31 h 34 min2020G
A cookbook agent works to elevate the brand of a chef known for the convenience of his recipes. As they playfully clash over everything, she must choose to follow the directions or her heart. TV-G

DawnReviewed in the United States on July 6, 2021
5.0 out of 5 stars
Spunky!
Verified purchase
This movie has spunk, cute, and has a good story. Principles are important! Good writing, good acting, and highly recommended.

LoveAmazonReviewed in the United States on June 17, 2021
5.0 out of 5 stars
Connection
Verified purchase
This movie was by far the best I have seen in a while. The connection between the characters was deep. I could not stop watching. Thank you.
One person found this helpful

KristenReviewed in the United States on July 20, 2021
4.0 out of 5 stars
Sweet & Simple
Verified purchase
This was a sweet movie. As long as you're looking for something simple and not too deep, this will fit the bill.

RomComConnoisseurReviewed in the United States on January 14, 2022
5.0 out of 5 stars
Me thought I saw Chris Pratt OR "Are you the crazy woman going to help my Dad?"
Debs Howard has been seen frequently in supporting roles around Hallmark and UP Faith & family, in such movies as “Matching Hearts”, “Christmas on My Mind”, “Just Add Romance”, “Small Town Christmas” and “Mingle All the Way”. She is one of those I have wanted to see in a lead role and wondered why I have not.

Finally here in “Hint of Love” I see her shining as Becky. And she did not disappoint. Some people just have something special and I think that of her. She is passionate, emotive, realistic, and convincing. I will be looking for more from her.

Dennis Andres starred in “Blueprint to the Heart” at about the same time as this one. But otherwise he is also someone I have seldom seen. In both of these movies he has been enjoyable. He does smooth, cool relaxed, carefree and confident pretty well. And he is no slouch in the convincing, sincere and realistic department. A fine actor. At times he reminds me of Chris Pratt, in mannerisms as well as presence.

He plays Will, a widowed father. Yes it is a frequent story line, but this take refreshed it by taking place after the mourning has subsided. It was not about him moving on. That was nice to see.

Together Debs and Dennis are way up there in my book. Terrific chemistry. Great together. Fun to watch. Both of them are loveable, separately and together.

I highly recommend this film. The story, script, music, cinematography and acting were all on point. I tried really hard to find something negative to say, but alas it was not to be.

5 stars without breaking a sweat.

H. BalaReviewed in the United States on July 4, 2021
5.0 out of 5 stars
"Who doesn't like nachos anyway? That's like hating freedom."
I did a double take - I didn't have a drink or I would've done a spit take - when it hit me that Hint of Love aired on the Up channel. More often than not, UPtv churns out rom-coms with middling to crap quality. I was pleasantly surprised by how good Hint of Love was. The trajectory of the love story explores old ground. But I thought the script was terrific and the two leads played off each other beautifully.

Let's not front, Becky Bayer (Debs Howard) is a snooty foodie. She thinks cooking is an art. The brief backstory on Becky is that she was Cordon Bleu-trained in Ottawa but never ascended to a head chef position and, so, settled for editing cookbooks. For the past ten years, she's worked at a prestigious publishing company in Seattle during which she guided ten best-selling cookbooks. She's the meticulous sort who takes the time to test each of her client's recipes. As the movie opens, she's foraging for ingredients in the woods because that's what the recipe instructs. Today, Becky is the most sought after cookbook editor.

And a top-notch editor is exactly what Will Fryer needs. Have you seen Will's cooking show? I admire what he's going for. Will (Dennis Andres) is a single parent of an 8-year-old boy who started out as a blogger until he parlayed that into hosting his own show. Will ain't some fancy chef. He's down-to-earth and blue-collar. He's like the Tim Taylor of the culinary world. And I dig his intentions. His goal is to make things easier for the overwhelmed single parent by providing them with practical and easy recipes to cook for their kids in thirty minutes or less.

Have you read Will Fryer's cookbook, Get It Done: Single Father Cooking? It was the sleeper hit on Amazon, never mind that it was made fun of by pretentious food critics and even by talk show hosts. We're getting to what drives the plot now. Will has got an idea for his follow-up book. Only thing is, his friend (and agent?) is concerned that his laughingstock status may impede the success of the follow-up. The work-around? Why not get the most sought after cookbook editor to boost his brand?

Except it won't be easy getting Becky Bayer to work with Will. She despises his show as an example of lazy and reckless cooking. For much of the movie, she and her new beau, food critic Robert Flannigan (Matthew James Dowden), indulge in disparaging Will's cooking. "Mediocrity shouldn't be good enough," Becky vents about Will. Robert has the better line: "I imagine it's like watching a child eat their play-doh kitchen set." Not to say that Robert is highfalutin, but that turtleneck looks perfect on him.

Worse, Will's new book will dive into Southwestern cuisine. He used to live in Albuquerque. But Becky's originally from Santa Fe. Her favorite thing ever is Southwestern cuisine. When she had dreams of opening her own restaurant, it would've featured that. Maybe you can see how she takes it as a personal insult that this caveman plans on encroaching in her territory.

When Will asks her to edit his book, she turns him down flat. She's now even more dead set on not working with him. But her publishing firm has the final say so. In convincing her, her boss comes up with the analogy that while their high end firm specializes in, say, luxury cars, Will's last book did end up being the Ford truck of cookbooks. The firm needs something that would sell to the hoi polloi, never mind that they look down their noses at Will Fryer and his crass approach in the kitchen. As a final incentive, her boss promises her a partnership should she manage to elevate Will and his book and his brand.

Even with all the rom-com clichés thrown in, this was a highly watchable movie. I appreciate that it doesn't wander into a place that is too silly or over-the-top. It's just right. The dread I always have when the leading guy is projected as a guy's guy is that he'd come across as too smug or too big of a jerk. But Dennis Andres plays Will just right. Will comes across as endearing rather than obnoxious.

Actually, it's Becky who comes across as obnoxious and elitist. Debs Howard looks a little bit like Kristen Bell, so I'm predisposed to like her. So, for the most part, I was able to overlook how much of a snob she was. It helps that her chemistry with Andres was such that their scenes in which she puts on a frowny face at his kitchen antics turn out to be really amusing. There are some good one-liners here. Such as when she observes Will's eyeballing rather than precisely measuring some ingredient, and a horrified Becky asks him how much he was pouring in the bowl. Will's response: "It's the yummy amount!" Or when they were going over what Southwestern cuisine recipes to put into his book, and Becky argues against nachos. Will's outraged retort: "Who doesn't like nachos anyway? That's like hating freedom."

Their constant tug-of-war, of course, rests on her championing haute cuisine versus his philosophy of putting out accessible, unintimidating, quickly-made comfort foods to feed the kids. She thinks he's reckless with his food. She gazes at his pantry and scoffs at his ingredients, most of which aren't fresh or authentic. Haute cuisine demands time and precision, but that goes exactly against the prep time constraints of the harried single parent. Can they arrive at a detente? A place where they can keep things practical yet strive for better standards? Can Becky add some order and refinement to Will's method of madness? Can she loosen up in the kitchen?

I love me some Southwestern cuisine, so it's one more way this movie hits the spot. When they were considering what to include in Will's book, and were mentioning sopapillas, posole, and Tex-Mex fajitas, my mouth carried on salivating. The dishes that were presented onscreen looked so very appetizing. And maybe Becky's mom had the right of it, that "Everything tastes better with a hint of love."

Other complications that spring up. Becky's boss had included Will's book on the summer release slate, this forcing Becky to push the book's mockup to be ready in weeks rather than the months she thought she had. It means Becky will have to take on an even more hands-on approach because, remember, she insists on trying out each of her client's recipes. And, then, there's the launch party for Will's book for which he insists that the guests be composed of single parents and their kids, but Becky's snob of a boss has other ideas...

I say go watch this movie. It's fun and funny, and I think you'll like Becky and Will. I appreciate that the love story sort of sneaks up on you. Also, Will makes a speech in his book launch party that's fantastic enough that I'm making mention of it.

One thing that felt off. Why is it that Becky only ever meets her mom at the door but never invites her in? Weird.
One person found this helpful
See all reviews
Back to top
Get to Know Us
Make Money with Us
Amazon Payment Products
Let Us Help You
EnglishChoose a language for shopping. United StatesChoose a country/region for shopping.
© 1996-2022, Amazon.com, Inc. or its affiliates