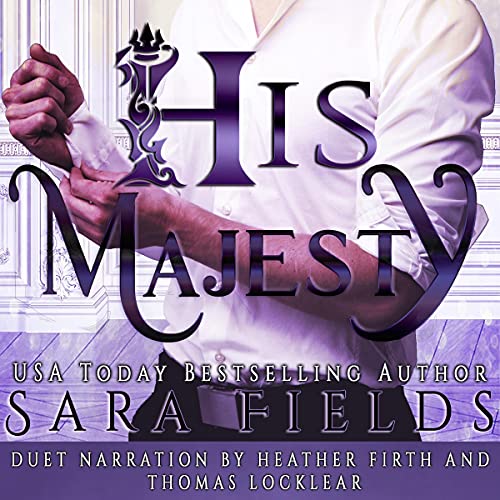 Maximo Giovanni Santaro is a king. A real king, like in the old days. The kind I didn’t know still existed. The kind who commands obedience and punishes any hint of defiance from his subjects.

His Majesty doesn’t take no for an answer, and refusing his royal command has earned me not just a spanking that will leave me sobbing, but a lesson so utterly shameful, that it will serve as an example for anyone else who might dare to disobey him. I will beg and plead as one brutal, screaming climax after another ravages my quivering body, but there will be no mercy for me.

He’s not going to stop until he’s taught me that my rightful place is at his feet, blushing and sore.

4.3 out of 5 stars
4.3 out of 5
208 global ratings
How are ratings calculated?
To calculate the overall star rating and percentage breakdown by star, we don’t use a simple average. Instead, our system considers things like how recent a review is and if the reviewer bought the item on Amazon. It also analyzes reviews to verify trustworthiness.
Top reviews

Freethinker
1.0 out of 5 stars What did I just read? A mixed bag of nonsense.....
Reviewed in the United States on October 3, 2020
Wow. The only reason I continued reading this book was that I hoped it may have been the h. nightmare and she'd wake up eventually.

I just didn't get the whole premise of the story. A 21st-century man claiming to be a King, Duke, Ruler, and so many titles I lost track. He lived in a remote area of Italy in a mansion that looked like a castle but had all the modern conveniences of today. He had a court within his "kingdom" that he ruled over. He was a King after all.

He told the h of his extensive reach not just within his "kingdom" but throughout the world. He did share King's status with many other Kings in other parts of the world. Something of course that most people weren't aware of. Seriously??

The entire story is about sex. Page after page. Now, I love risqué romance novels but this one consisted of nothing more than repetitive situations of dominance and arrogant commands. The h was defined as the King's concubine to his court. Nice show of his respect and affection to the h.

He punished her in front of his court, after she disobeyed him, by spanking her, making her remove her clothes, using butt plugs, spanking her with a strap, and then......inserting raw ginger into both her vajaja and rear end. But of course, he had to do this to exert his authority and show his people his was a strong leader and no one would escape public humiliation if he deemed it necessary.

Then we have the h. Isabella. What was wrong with this woman? She's involved with a man dying in front of her, she's then kidnapped, and upon awakening into her new environment seems calm and unafraid. She has absolutely no backbone whatsoever and concedes to the King's commands. She doesn't seem the least bit freaked out that he thinks everything about his medieval mentality is ok. She never once demands to leave or ask why she was taken.

Close to the end of the story, The King, Matteo Santaro, gives Isabella a code just before she gets a ride on a helicopter to leave. He tells her that if she's ever in trouble or in need of anything she should use it. The call would go directly to him. However....there's a price to pay. If she uses the code to call him, then she would be "taken" in the last place he had not yet used, her bottom of course. After he'd taken that virgin hole, she would become truly his.

So....I'm not sure why there are so many good reviews here. Everything about the story is one-dimensional. Both H and h are predictable in their thoughts and action. It just didn't do it for me. There was no suspense leading up to Matteo's and Isabella's relationship which was nothing more than sexual. There was nothing beyond that.
Read more
31 people found this helpful
Helpful
Report abuse

StephP
5.0 out of 5 stars Very entertaining
Reviewed in the United States on September 7, 2020
Verified Purchase
This was a really good story and I enjoyed it so much I read it all in one sitting. It's a really dark love story but also entertaining. Isabella finds herself in an untenable situation but is saved by what turns out to be the man she needs. If you don't like dark love stories this isn't for you, if you do this is a good one. I thought it could have ended better it seemed rather abrupt, where was the chance for Isabella to confront or be confronted by the other hopeful to be queen, or the announcement to the court who she really was? Just a couple of the questions left hanging out there.
Read more
One person found this helpful
Helpful
Report abuse

Christina
3.0 out of 5 stars Alpha loveliness
Reviewed in the United States on July 24, 2021
Verified Purchase
Loves the story and the work building for a quick sexy read but there was a plot hole...what happened with the success?
Read more
One person found this helpful
Helpful
Report abuse

Rose Howse
5.0 out of 5 stars The King and Isobella
Reviewed in the United States on August 25, 2020
This was a fast paced highly erotic story of a normal woman pursued by a rich, pushy Italian, but he pays the price of being overly agressive. Then Isobella finds herself in a quaint Italian castle in secluded country not many know about. She is faced with the king, Matteo, who seriously punishes and conquers Isobella as his subjects look on. After her humiliating punishment and Matteo's exhibition of the full act, she learns why she is where she is, she caused the death of a man, but the complications of that act are many and varied. There are quite a few revelations that Isobella will learn and Matteo is focused on possessing Isobella thouroughly. It's a dirty fairtale in a way, she learns all Matteo can teach her as she also learns her place in his Majesty's life on her knees open to all he desires of her. There are quite a few spankings and other punishments as Isobella struggles to adjust to life with royalty. I liked the story and both Isobella and Matteo, I just wished there was more of Matteo being a gentler lover but I understand his reasons for the extreme corrections he needed to inflict on Isobella and the fact that she ultimately enjoyed the thrill she got from them. I hope there are more Rough Royals in the near future.
Read more
3 people found this helpful
Helpful
Report abuse

Jayne Gibson
5.0 out of 5 stars Another win for Sara Fields
Reviewed in the United States on August 25, 2020
I’ve been reading Sara Fields for quite a while now, and I’ve come to appreciate her writing style and plot lines as she takes me out of my ordinary life and places me in one of her creative worlds. It’s always a pleasure to read her words.

This is the story of Mateo Giovanni Santaro, a king in his own land, and Isabella DeLuca, a woman who draws his eye in more ways than one. There is a mystery here regarding these two that is eventually revealed through a very engaging story.

As per usual with this author, the plot is tight and well executed, the story was engaging and the characters well formed. I found myself going through an entire gambit of emotions as I read the book, and to me this is indicative of good storytelling. Highly recommended.
Read more
2 people found this helpful
Helpful
Report abuse
See all reviews

Kindle Customer
5.0 out of 5 stars Omg!!!
Reviewed in Australia on January 7, 2022
Verified Purchase
One of the best books I've read In a long time! Full of so much heat, passion, fun and love.😍😍
Read more
Report abuse
See all reviews
Back to top
Get to Know Us
Make Money with Us
Amazon Payment Products
Let Us Help You
EnglishChoose a language for shopping. United StatesChoose a country/region for shopping.
© 1996-2022, Amazon.com, Inc. or its affiliates