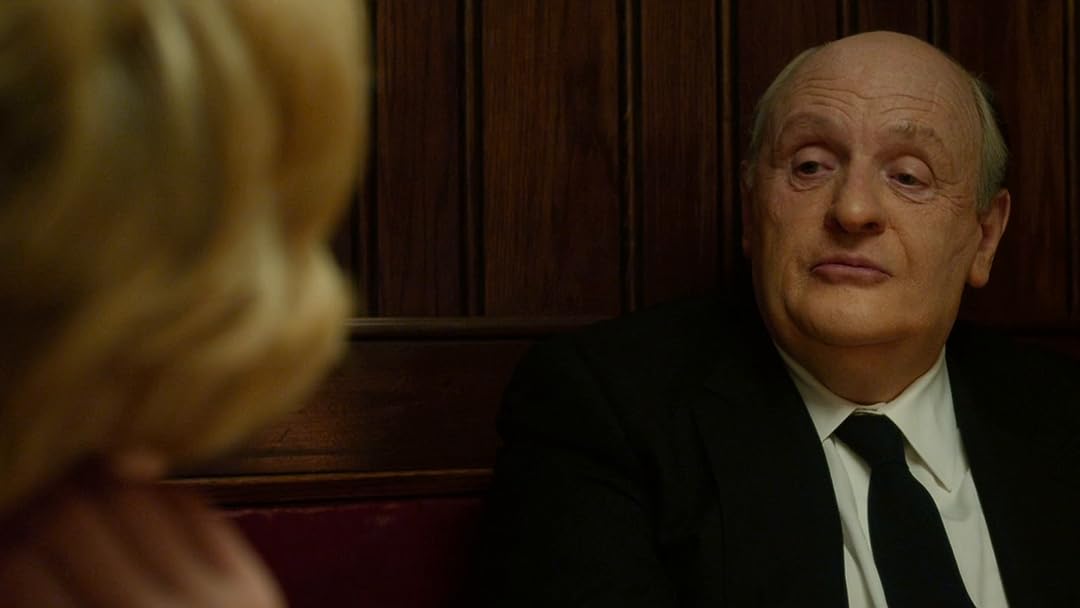 J&JReviewed in the United States on October 2, 2017
5.0 out of 5 stars
It. Is. Good.
Verified purchase
Must see for Hitchcock fans.
It's not just the story but there are impressions of Hitchcok style throughout the film.
I knew he was ingrained in my psyche but for example, one scene is reminiscent of a classic Hitckcock car scene & it gave me a chill.

Anthony Hopkins is brilliant as always. Got sucked into Westworld bc of him.
Helen Mirren is fantastic as his wife and, she doesn't just play a supporting role, she has her own storyline.
There is plenty going on to keep your attention yet the picture doesn't lose its focus, the history of Psycho.

Two new things I learned. It was based on actual true story.
Hitchcock sought it out & funded on his own bc at age 60 his relevance, to continue after a successful career, was questioned.
Psycho was his Swan Song to prove he would always have a voice.

There is one other fantastic twist that runs parallel to the main story line but, I don't want to ruin it for you.
Just know... It. Is. Good.

Richard PengalaReviewed in the United States on August 13, 2021
4.0 out of 5 stars
Very honest tale of a genius
Verified purchase
This movie is a must view for film buffs, artists and fans of the odd, quirky & often very tacky movie director Alfred Hitchcock. The insights and revelations into his psyche and creative process are brilliant and often scary. Anthony Hopkins does a great laid back restrained job of getting Hitchcock's essence without too much parody. Helen Mirren who plays his wife Alma gives a bravura, intelligent, believable portrayal of a wife who hates the sins but loves the genius of "Hitch" who needs her support and brilliant script doctoring, editing and morale boosting abilities to fully succeed in completing his projects...inspite of financial, censorship and producer meddling problems. Oh well, what else is new in Hollyweird....
One person found this helpful

Texas ReaderReviewed in the United States on September 28, 2020
5.0 out of 5 stars
Not To Be Missed
Verified purchase
"Hitchcock" is NOT TO BE MISSED if you are an Alfred Hitchcock fan or a fan of his movies. It is a superb telling of a fascinating man and his talented wife, Alma. Anthony Hopkins embodies Hitchcock in an excellent performance. Helen Mirren is a sheer delight as the nuanced Alma, without which Hitch could be somewhat lost. Scarlott Johansson gives a lovely, beautiful performance as Janet Leigh. I was less taken with Jessica Biel's performance as Vera Miles. It was a stretch for someone whose physical characteristics are so far removed from Vera Miles; Vera was usually a blond, thin lips, and fair skinned who portrayed roles with a slight chill, a Cool China Doll. Jessica's attributes are more exotic, dramatic & warm-blooded, making her "Vera" not quite on point; however, she still delivers a good performance. Toni Collette as Peggy, Hitch's assistant is strong, as is James D'Arcy as Anthony Perkins. The details of Hitchcock's life, off & on the sound stage, as well as the making of "Psycho" were fascinating, thought-provoking & wholly entertaining. Don't miss this incredible movie.
2 people found this helpful

joel wingReviewed in the United States on March 6, 2022
3.0 out of 5 stars
Hitchcock's rocky relationship with his wife
Verified purchase
On the surface this film is about the famous director played by Anthony Hopkins trying to get Psycho made which was opposed by his studio. What it’s really about is his relationship with his wife played by Helen Mirren. Hitchcock for instance was famous for his predilections for young blond women. She was also a screenwriter and editor who submerged her career for his. It’s all about Hopkins at first, but then Mirren comes into her own in the second half.

There are also some really unexpected scenes such as Hopkins arguing with a movie code inspector who said that no Hollywood film had ever shown a toilet and Psycho was not going to be the first one to do it. Another time Hopkins acts like a conductor to the screams of the audience as they watch the shower scene from Psycho during the premier.

It’s all makes for a very enjoyable movie.

Allen Garfield's #1 fan.Reviewed in the United States on June 21, 2019
5.0 out of 5 stars
Great biopic! Amazed that it's not as highly regarded as it should be.
Verified purchase
A biopic about (roughly) a year in Hitchcock's life - the period in which he made Psycho.

Anthony Hopkins plays the droll Hitchcock perfectly. Wildly entertaining and informative - the film jibes with the biographical bits I've read over the years.

Bonus: Jerry Casale from Devo has a bit part.

A five star must see!
5 people found this helpful

C. C. BlackReviewed in the United States on September 16, 2017
3.0 out of 5 stars
It's Only A Movie
Verified purchase
Alfred Hitchcock is said to have quipped to Miss Bergman when she was struggling with a scene: "Ingrid, it's only a movie." The same may be said of "Hitchcock."

Hollywood's biopics notoriously play fast and loose with their subjects, be they Cole Porter ("Night and Day," 1946) or Johnny Cash ("Walk the Line," 2005). Sacha Gervasi's "Hitchcock" (2012) is no exception. Based on Stephen Rebello's "Alfred Hitchcock and the Making of Psycho" (1998)—an excellent, thoroughly researched, well-balanced book—"Hitchcock" gives its titular character the same treatment. By that I mean it often oversimplifies human complexity in order to entertain an audience. For instance: There's no evidence whatever—certainly not from Janet Leigh, who ought to have known—that Hitch uncorked his repressed fury by terrifying her while filming "Psycho"'s shower scene. That does injustice both to the director's craft and the actress's ability. Exactly how far the relationship went between Hitch's wife Alma Reville and writer Whitfield Cook, who worked on the scripts for "Stage Fright" and "Strangers on a Train," seems a matter of dispute—but in this film it serves a weak domestic, melodramatic purpose. Ed Gein's wandering in and out of Hitchcock's fantasies is pure chozzeray. For those who care to separate fact from fiction in "Hitchcock," NPR's interview with Patrick McGilligan, a reputable Hitchcock biographer—"Fact-Checking "Hitchcock": The Man, the Movie, and the Myth" (24 December 2012)—does a good job in short space.

That said, "Hitchcock" is graced by some splendid performances. Anthony Hopkins, wearing a fat suit that makes the director even more obese than he actually was in 1959-60, disappears into the character he is playing, even though he's been directed to present a more tortured, less witty characterization.. Scarlett Johansson conveys Janet Leigh's cheerful professionalism. In fleeting minutes onscreen James D'Arcy offers an uncanny portrayal of Anthony Perkins. But this movie belongs to the incomparable Helen Mirren, who captures in Alma Reville the qualities that those who knew her remember most fondly: her intelligence, wit, formidable strength, and unerring judgment. The consensus among those who knew them and have gone on record is that Hitchcock released none of his films unless they had satisfied Alma. When he paid attention to no one else, he always listened to her. If "Hitchcock" draws Alma Reville out of the shadows behind the great director and allows her a proper place in the limelight, it is movie worth having been made.

When, in 1979, the American Film Institute honored Hitchcock with a Life Achievement Award, he said to his audience: "‘I beg to mention by name only four people who have given me the most affection, appreciation, encouragement and constant collaboration. The first of the four is a film editor, the second is a scriptwriter, the third is the mother of my daughter, Pat, and the fourth is as fine a cook as ever performed miracles in a domestic kitchen. And their names are Alma Reville."
16 people found this helpful

The Hare of the NorthReviewed in the United States on May 23, 2016
3.0 out of 5 stars
But Tony Hopkins' Hitchcock is a nice piece of impersonation
Verified purchase
A bit contrived and often flat in the scenes between Hitch and Alma (what Hitch himself would have done with placid English domesticity curdled with perverse impulses!). But Tony Hopkins' Hitchcock is a nice piece of impersonation. And Scarlett Johansson's Janet Leigh is crisp, a sharp little miniature of tone and likeness. Some specific complaints: the first act seems rushed. Some histories have "Psycho" coming as a result of Hitchcock's shrewd reading of the emerging market for cheap, dark little exploitation/drive-in movies. "Hitchcock" instead casts the movie as a make-or-break moment for Hitchcock's commercial viability—which it may have been, but those beats are thinly established. Instead the movie pursues a melodramatic subplot in which Hitchcock suspects Alma is cheating on him. He's tormented by his suspicions and his fears, which are voiced by Ed Gein himself as a kind of spectral conscience. A bizarre and distracting choice (maybe Bosley Crowther would have made more sense). Getting any movie made is enough of a tale of farce and treachery; why the creative team added this layer of misdirection is hard to figure. For my own taste, it would have been much more illuminating to have the film plumb Hitch's creative and commercial response to the "Psycho"-like cheapies that were crowding out his own brand of filmmaking. The point is that "Psycho" was a turning point for Hitch; his sexual obsessions became starker and less playful after "Psycho." The film is more like a shrieky coda to "Vertigo" than this film lets on. This movie depicts him stumbling and unsure of himself during the filming of what is rightly considered a masterpiece. There's some dramatic value to that, but it doesn't account for the masterly confidence of virtually every shot in "Psycho." If Hitch was an artist on the downslope of his powers, where did such a movie come from, given he was working with a rookie screenwriter and the production crew from his TV series? What I missed most in the movie was some of Hitchcock's own wit in teasing out the perversity of quiet middle-class people who dabble in murder firsthand or once-removed.
8 people found this helpful

ProfessorReviewed in the United States on August 27, 2019
3.0 out of 5 stars
Typical Hollywood biopic exaggeration
Verified purchase
It takes a lot of guts to play Hitchcock. Same thing with his wife Alma. Hopkins and Mirren hold their own. The problem with Hollywood biopics is: How much is accurate truth, and how much is fictional exaggeration? Did Hitch really hold the knife in the shower scene to scare Janet Leigh? Did Alma really have an affair with a screenwriter?
Also, the dream sequences with Hitch and the real killer on whom Psycho was based are pointless.
Worth a watch if you keep in mind that it's not a documentary.
2 people found this helpful
See all reviews
Back to top
Get to Know Us
Make Money with Us
Amazon Payment Products
Let Us Help You
EnglishChoose a language for shopping. United StatesChoose a country/region for shopping.
© 1996-2022, Amazon.com, Inc. or its affiliates