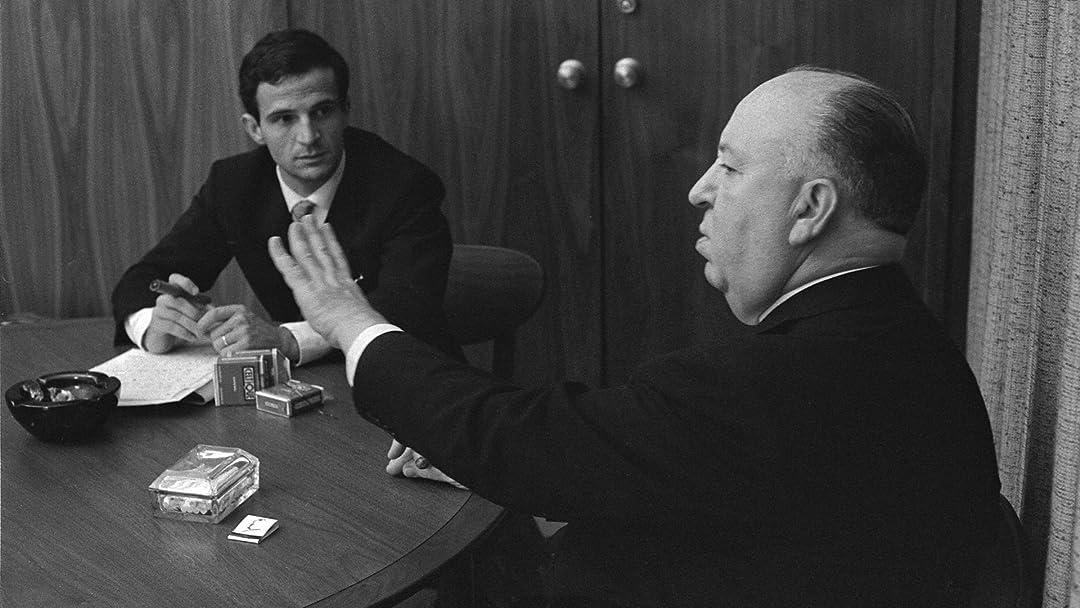 C. C. BlackReviewed in the United States on September 12, 2017
3.0 out of 5 stars
A Well-Intentioned Misfire
Verified purchase
I missed this documentary when it played last year (very briefly) at a local art-house theater. I wanted to love it. A college film course I took in 1974 used the first edition of Truffaut's "bible" as a textbook in a semester dedicated primarily to Hitchcock's films, including his extant silents but excluding the then "Forbidden Five." Truffaut's book remains a classic must-read for anyone who cares about Hitchcock or, for that matter, film in general.

The problem I find with this film lies in its diffuse character and lack of clear focus. On its face Mr. Jones's documentary documents a book: in itself a challenge. After some interesting morsels of how the book came to be (most of which Hitchcock fans will already know), this movie can't stay with the book. It naturally gravitates somewhat to Truffaut and his career, but mostly to Truffaut's subject, at a time when F.T., along with Chabrol, Bogdonavich, and Wood were making critics sit up and pay attention to a popular entertainer's craft and recurrent themes. Meanwhile, the movie is glossed by excerpts from interviews with contemporary directors (Asayas, Bogdonavich, Linkletter, Scorsese, Shrader, among others), who talk variously about the book's impact upon them and the influence on their work of Truffaut or Hitchcock (or both). Their comments are interesting, occasionally fascinating: again, however, there's no clear through-line among them because the movie doesn't seem to have one. The net result: If you are already a Hitchcock enthusiast, you're likely to know at least 70% of what the movie offers. If you're not already a convert to the Church of Hitch, I doubt this film would make you one. Reading Truffaut's book might; watching Hitchcock's movies certainly would. Oddly I found most of the film's bonus features—outtakes of what Jones chose not to include, which compiles his interviewees' observations of "Notorious" and "Rope"—more interesting and informative than this film's final cut.

I suppose it is blasphemous to rate this documentary anything lower than five stars, but Ebert taught us to to call it as we see it. I've reported what I've seen.

FrankReviewed in the United States on July 27, 2020
4.0 out of 5 stars
Nice but you need the book!
Verified purchase
Worth watching once, though it had little I hadn't seen before. The book, however, is indispensable to anyone who cares about filmmaking, or who wants to know more about films. It shows more of the interaction between Hitchcock and Truffaut. Those of us who love art film have to be impressed by Hitchcock's creativity in making interesting scenes with camera angles that might seem familiar, because they were worth imitating. The use of a concave mirror to look like the glasses of the murder victim in Strangers on a Train - brilliant! Some of these things we can learn from extras, but it's nice to see some of Hitchock's best inspirations in a film like this.
4 people found this helpful

Don GReviewed in the United States on December 24, 2021
2.0 out of 5 stars
This is NOT a video of Truffaut interviewing Hitchcock!
Verified purchase
I ordered item this because I thought it was a video of Truffaut interviewing Hitchcock! Boy was I wrong! It's just a documentary about the interview! What a disappointment! I had read the book many years ago and I was looking forward to seeing a video of the actual interview! btw - I didn't realize that Truffaut did not speak English ad as a result, they had to have a French-English interpreter present at the interview.

(Update on 04/06/2022:) So NO ONE out there found my review useful at all? If that's the case, I don't know if I will bother reviewing anything on this site anymore.
One person found this helpful

It helps to be an Alfred Hitchcock aficionado & a Truffaut aficionado, but that’s not necessary to enjoy this tribute to Truffaut paying due tribute to Hitchcock

In interviews of Bogdanovich & Scorsese, they pay homage to Hitchcock’s skill

Truffaut only spoke French. Hitchcock spoke a English & French. At times the dialogue & subtitles are at cross purposes as English is translated into French while English & French are being spoken
5 people found this helpful

HKReviewed in the United States on July 21, 2017
5.0 out of 5 stars
What a great picture for the cover
Verified purchase
In the movie they discuss how time can be elongated or cut short. The scene they focus on is from 400 Blows when the little boy sees his mother kissing someone else on the street. She realizes he's seen her and he realizes what she's doing is betraying his father and there's a little bit of dialogue, the mother says explicitly, "he saw me" and after hearing truffaut describe the scene beat by beat Hitchcock says 'I wish there hadn't been dialogue there' and he's right and that's why every single thing out of his mouth from then there out was gold. To me: now I want to talk about how this movie made me realize why some people who have gone through traumatic experiences come out healthy and others have PTSD and I think time has something to do with it. The time spent wondering if you were going to die.
6 people found this helpful

McabeReviewed in the United States on April 15, 2022
3.0 out of 5 stars
Disapointed
Verified purchase
I was disappointed ,didn't get much out of this blue ray . I think if you want to know about the interview you have to find the book that Truffaut wrote. I don't know if the book is available in U.S.I am going to look for it .

Nashville Crush SpreadReviewed in the United States on October 10, 2021
4.0 out of 5 stars
Solid Tribute
Verified purchase
Well edited and thoughtfully put together - really liked the commentary on Vertigo and Psycho - also very glad they used a lot of David Fincher overlay commentary, as he is another of my favorite directors and who always, too, has something interesting to say about audiences and the medium. all cinephiles need this in their blu ray library

AndyReviewed in the United States on March 20, 2017
5.0 out of 5 stars
Very Informative
Verified purchase
I really enjoyed this documentary. I learned so much. I was particularly enthralled with Hitchcock discussing his films with Truffaut...especially regarding "Vertigo"! Modern day directors also provide their commentaries of some of Hitchcock's work. Any fan or scholar of Hitchcock's work should get this documentary.
5 people found this helpful
See all reviews
Back to top
Get to Know Us
Make Money with Us
Amazon Payment Products
Let Us Help You
EnglishChoose a language for shopping. United StatesChoose a country/region for shopping.
© 1996-2022, Amazon.com, Inc. or its affiliates