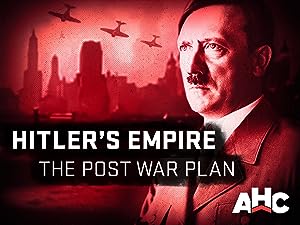 Season 1
(54)
20187+
Join Guy Walters, an award-winning journalist and Nazi expert, as he hunts down the fascinating but alarming truth about how the world would have looked had Hitler and his Nazi regime not been defeated. Here, in unsettling detail, is the Nazi Blueprint for the world envisioned by the Third Reich.

Happy WifeReviewed in the United States on June 25, 2018
5.0 out of 5 stars
Contemporary Style with Old-Fashioned Substance
Verified purchase
Whoa! There was so much information in this thought-provoking series. Relying upon actual records, not mere philosophy about how bad Hitler was yada-yada-yada, we learned just how detailed he was in his quest for the world, plans that we had never even heard of before. The man was closer to victory than usually gets explained. Modern documentaries tend to rely on fluff, but we easily spent double the time just pausing and talking about the concepts. So bummed when we realized there was only one season. Watch this!
3 people found this helpful

JOE SWOLEReviewed in the United States on March 17, 2019
3.0 out of 5 stars
So so
Verified purchase
A little boring not terrible but seen better

kathleen waletzkoReviewed in the United States on June 1, 2020
1.0 out of 5 stars
Full of gross generalizations, and inaccurate in many places
Though entertaining and obviously meant to fit within History-styled channel programming, statements made by many of the interlocutors are controversial and/or just plain wrong. Lindbergh, for example (having grown up in the same county that he did, with sauk centre only a few minutes away, I read much about him growing up) was never a nazi sympathizer, he was on the far left, no the far right - yet one of the supposed experts made it appear as if this was the case, and I believe even labeled him a sympathizer at one point. Please - either double check your "experts" or at the vary least perhaps submit this for peer review among people with real academic credentials.

Good to listen to while working in the garage or working in your latest book, as background noise. but the vacuousness of the series makes me wonder whether this was developed for those in secondary school rather than anybody who knows that Nietzsche isn't a new brand of German beer, Wittgenstein isn't someone who is being "witty," and so on - and the like.

Unless this series is simply meant to be an ironic piece, upon which I would congratulate the creators with doing a good job.

Ron J. MillerReviewed in the United States on February 28, 2021
5.0 out of 5 stars
I'm convinced
I think it's unlikely that Hitler died in the bunker in Berlin. I think it's much more realistic to think he died in Paraguay or Brazil. I thought the investigation was thorough and entertaining. And even if Hitler never left Berlin, it was fascinating to see all the ways the Nazis were living and acting upon their ambitions in South America. I really enjoyed this series.

Clear Lake ManReviewed in the United States on June 28, 2019
5.0 out of 5 stars
Scary
Good things the good guys won. Post War World far from perfect but would be much worse if history took another turn.

Amazon CustomerReviewed in the United States on August 22, 2018
5.0 out of 5 stars
Fascinating, well done, very stimulating
I thought the facts were fascinating and not your normal bits of information. Really thought provoking. I binged on 3 in a row glued to the tv.

Who is the narrator? I know I have heard of him before but I can't find out online who he is and it's driving me crazy

Sydne SmolenskiReviewed in the United States on November 17, 2018
5.0 out of 5 stars
Awareness of the war
Learned about the reality

JReviewed in the United States on April 23, 2018
5.0 out of 5 stars
Another good show from AHC
Its a good show and gives an in depth look at what would have happened if Hitler won WW2. The only thing I don't like about it is that the episodes seem to end abruptly as if the had to shorten them.
See all reviews
Back to top
Get to Know Us
Make Money with Us
Amazon Payment Products
Let Us Help You
EnglishChoose a language for shopping. United StatesChoose a country/region for shopping.
© 1996-2022, Amazon.com, Inc. or its affiliates