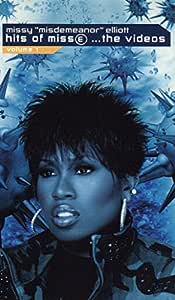 Secure transaction
Your transaction is secure
We work hard to protect your security and privacy. Our payment security system encrypts your information during transmission. We don’t share your credit card details with third-party sellers, and we don’t sell your information to others. Learn more
Details
Ships from
*The Record Track*
Sold by
*The Record Track*
Return policy: This item is returnable
You may be charged a restocking fee upto 50% of item's price for used or damaged returns and upto 100% for materially different item.
Read full return policy
New & Used (5) from
$6.39 + $3.99 shipping

$12.33
& FREE Shipping on eligible orders. Details
Sold by: Amazon.com
Have one to sell?
Sell on Amazon

Missy the artist is cool, confident. Missy the producer/songwriter is in charge, innovative. This is Missy the video artist--off the wall and off the hook. The Hits of Miss E...The Videos, Volume 1 DVD and VHS feature four of her groundbreaking videos, all available for purchase for the first time. In addition, the DVD version includes behind-the-scenes footage and Surround Sound. This companion video to Missy's album Miss E... So Addictive leaves no doubt that Missy is as far ahead of the game in front of the camera as she is behind the mixing board and the microphone. "The Rain (Supa Dupa Fly)," "Hit 'Em wit' da Hee," "She's a Bitch," "Get Ur Freak On."

3.9 out of 5 stars
3.9 out of 5
16 global ratings
How are ratings calculated?
To calculate the overall star rating and percentage breakdown by star, we don’t use a simple average. Instead, our system considers things like how recent a review is and if the reviewer bought the item on Amazon. It also analyzes reviews to verify trustworthiness.
Top reviews

Reginald D. Garrard
5.0 out of 5 stars One of the premier video artists of the day
Reviewed in the United States on June 8, 2001
Verified Purchase
When Missy "Misdemeanor" Elliott first hit the video music scene several years ago with "Super Dupa Fly," I was blown away. The video was eye-catching, thrilling, supremely executed and, just a heckuva lotta fun. Her subsequent releases, as well as the latest, are just as impressive. Contrary to the earlier reviewer, I prefer the "edited" versions presented here. Not one who actually listens to the artist's lyrics, I am totally blown away by the visuals and the choreography of Elliot and company. Elliott deserves an award for consistently keeping her "freak" going.
Read more
3 people found this helpful
Helpful
Report abuse

Mrs. Mr.. Mumford Jr.
5.0 out of 5 stars Good Music video
Reviewed in the United States on February 16, 2014
Verified Purchase
If you like Music video This is good to have DVD to add to your collection if you enjoy music video. I know it dose not have all of missy music video. And it is short but the one they have are good.
Read more
Helpful
Report abuse

Super T-Funk
5.0 out of 5 stars Holla at ya
Reviewed in the United States on December 9, 2014
Verified Purchase
What can I say. I still love you girl. Get it girl.
Read more
Helpful
Report abuse

Mr G Bowden
4.0 out of 5 stars For "Missy" Fans The World Over!
Reviewed in the United States on June 21, 2001
When I was younger, Missy "Misdemeanor" Elliott videos didn't arrive on MTV as much as they should have done. And so, for a meagre £9 in the UK, to own a valuable clutch of Miss E's finer forays into the world of music videos was essential. Only problems are that some may question the chosen selection, and at a tight 17 minutes you don't get much of Missy for your dollar.
Four videos are up for your DVD viewing pleasure. The first video is Missy's latest single, "Get Ur Freak On", her most successful effort taken from her third album "Miss E...So Addictive", mixing Missy's familair friends of hip hop and r'n'b, groovy post-"Crouching Tiger, Hidden Dragon" kung fu and a shedload of eastern influence. Vid is directed by Dave Meyers, responsible for Britney Spears' "Lucky". Her latest is followed by her first, Missy's debut single "The Rain (Supa Dupa Fly)", her first of many videos directed by Hype Williams. All crazy costumes and wild colours, the inflatable bin bag suit remaining the infinite standout. Third up is "She's A B****", Missy and Hype's wildest foray into the format, all futuristic smoothness and extremeness. The videos finish up with the wonderful "Hit 'Em Wit Da Hee", a trip into Tim Burton-esque fantasy with a dash of Michael Jackson a la "Smooth Criminal" in Missy's flashy dance attire. Vid is directed by Paul Hunter, co-director of D'Angelo's awfully nude "Untitled (How Does It Feel)" video and is made all the more essential for being an evilly groovy remix, adding strings from Bjork's "Joga" for an intoxicating effect.
Not exactly elaborate on details as to why said videos look the way they do, nor how Missy's beats were inspired, but the DVD remains essential for Missy's fans everywhere. Expect "Sock It 2 Me", "Beep Me 911", "All N My Grill" and "Hot Boyz" for Volume 2.
Read more
14 people found this helpful
Helpful
Report abuse

I'm hungry. feed me
VINE VOICE
1.0 out of 5 stars I hate this DVD
Reviewed in the United States on February 14, 2008
This DVD is falsely advertised. There is a "Parental Advisory Explicit Content" Sign on the cover art yet no "Explicit Content". The videos have the edited and radio lyrics on them. With the Parental Advisory sign, you'd think that the explicit versions of the song would be dubbed over the videos but no. The only thing explicit is the use of the word "B!+ch" In  She's a B!+ch  and that's usually not explicit enough for a parental advisory. So I found this dvd to be a complete waste of my money. Now that Missy has 5 albums out and a new one on the way, She should release a new Music video DVD. Avoid at all costs
Read more
9 people found this helpful
Helpful
Report abuse

Jeremy
3.0 out of 5 stars Miss E's hits, and misses.....
Reviewed in the United States on May 15, 2001
Missy Elliott is an inventive and always fresh artist. This collection of videos is no exception. I love the videos on this disc, but the behind the scenes of She's a B**** and Supa Dupa Fly are very short, and not what I expected. Also, the DVD is sold with the Parental Advisory label on it, so I bought it immediately thinking that it would be the uncencored cuts of her vids, but these are the bleeped out MTV versions, which was very dissapointing. Don't get me wrong, the videos are good, but I would've loved to see them in the way they were meant to be artistically presented and not some souped up version for a 13 year old. Why else the Parental Advisory label? There's nothing raunchy nor explicit in this DVD, so if you are expecting it, don't buy it. Overall though, I was pleased with the videos, as they are some of the most inventive artistic expressions to hit the music scene in a LONG while. Lookin forward to volume 2, maybe it'll be a little better...
Read more
5 people found this helpful
Helpful
Report abuse
See all reviews

Angie
5.0 out of 5 stars Brilliant!
Reviewed in the United Kingdom on July 10, 2010
Verified Purchase
Fascinating DVD from Missy Elliott-loved it! So diverse and unique, loved every single video, played it to death! Would recommend to all Missy Elliott fans to add to their collection.
Read more
Report abuse
See all reviews
Back to top
Get to Know Us
Make Money with Us
Amazon Payment Products
Let Us Help You
EnglishChoose a language for shopping. United StatesChoose a country/region for shopping.
© 1996-2021, Amazon.com, Inc. or its affiliates