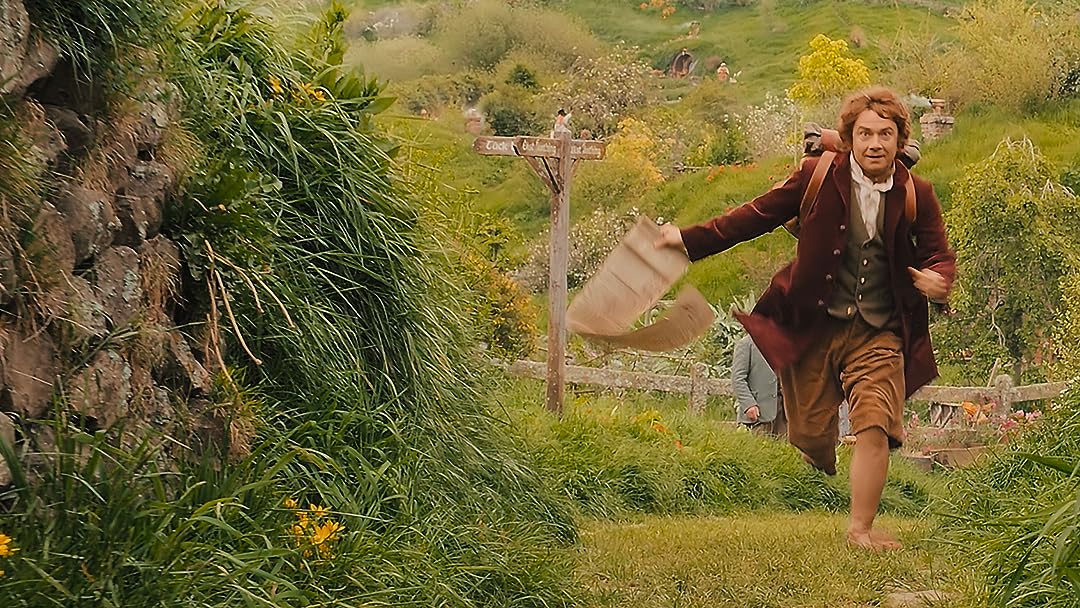 W. OdomReviewed in the United States on February 24, 2021
5.0 out of 5 stars
IGNORE REVIEWS ON PICTURE QUALITY!!!
Verified purchase
I'm a huge Tolkien fan and almost didn't buy this because I have a 4k system and there were so many negative reviews about picture quality. THEY ARE WRONG!

I'm running a 7.1.2 sound system with 4K video supported through a Sony VPL-VW295ES 4K projector, Sony UBP-X700 4k player, Denon AVR-X4700H 8K AV, and 21Gbps HDMI cables. It's stunning. Absolutely no audio or video issues. Given my experience, I can only assume that the negative reviews are coming from people who don't have the proper audio/visual/cable hardware to support Dolby ATMOS and Dolby VIDEO.

Never put LP records into your DVD player. Never put 8-tracks into your cassette player. Never go against a Sicilian when death is on the line. Never play 4k Dolby VIDEO discs in a system that doesn't support them.

And now a quick movie review: before buying the discs I had only seen the theatrical version. Just like with LofR, there is a HUGE difference. The extended versions are superior. You won't realize it until you see them, but 15 additional seconds here, an added scene there, 30 more seconds here, and suddenly this has all been tied together quite nicely with the books and the movies. There are in-jokes, riffs on subjects from other books, foreshadowing, etc., that was cut out of the theatrical releases.

Deik017Reviewed in the United States on December 2, 2020
1.0 out of 5 stars
Love the movies but the new color grading is horrible.
Stick to the Blu-Rays. The 4K version's color grading has been brightened and oversaturated. If you thought it looked too digital before, it's much worse now.

The screenshots I posted have a drastic example. Smaug's lair used to have a nice dark, muted look because they're in a mountain with no sunlight. Now it's been brightened and has an orange glow that's present through most of the movies.

I'm really so dissapointed that Peter did this. The color grading was already excellent and now it's completely butchered.
92 people found this helpful

WadeReviewed in the United States on December 22, 2020
2.0 out of 5 stars
Decent movie, terrible UHD blu-ray quality
Verified purchase
The movies themselves are actually quite a bit better than I recall from when I first watched them in theatres eons ago. They're still not amazing - definitely not as good as Lord of the Rings - but I did enjoy watching them again.

- Compression artefacts around certain moving objects in parallax situations - that kind of fuzzy "force field" that appears around a person, or similar, as the camera pans. I've seen this on a few UHD blu-rays lately, but this is the worst I've seen so far. It's not _too_ disruptive, but it definitely draws the eye and distracts from the story.

- The over-saturation is tragic in some scenes. Most of the time everything looks just fine, colour-wise, but then inexplicably there'll be a random scene in the middle where everything is cartoon vomit. I've never seen such terrible colour mastering on a blu-ray before. *Ever*.

- In some scenes the whites are *completely* gone. There's a couple of parts of the barrels-in-the-river sequence where the entire river - most of what's visible on screen, often - is flat white, with absolutely no detail at all. Similarly the snow-capped mountains in many scenes are completely blown out. Usually with accompanying over-exposure frame-wide, indicating it's not so much a dynamic range concern as flat-out wrong exposure. It looks like they massively over-exposed in the original recording, and couldn't recover even the tiniest whiff of the highlights.

I'm flabbergasted that they would ship these expensive blu-ray collections with such massive, amateur mastering flaws.
40 people found this helpful

Mr BReviewed in the United States on December 5, 2020
5.0 out of 5 stars
Excellent 4K transfer and Atmos sound
Verified purchase
If you are fan of the Hobbit movie trilogy this 4K set is an improvement over the Blu ray copies. The depth of color is fantastic. The Atmos provides expanded depth to the sound track.
35 people found this helpful

Loki PokiReviewed in the United States on December 6, 2020
5.0 out of 5 stars
OH MY GOD!!
Verified purchase
I bought both this and the lord of the rings on 4K and the quality is amazing its like you are in the movie. Its worth the price I paid around $170 for both.Not to mention on both lord of the rings and this one you get both extended versions and theatrical. I prefer extended so it was nice not having to pay more for the extended its one price for both versions.
23 people found this helpful

Vishal DeshpandeReviewed in the United States on December 20, 2020
2.0 out of 5 stars
regular blu-ray version better than 4k
Verified purchase
I love the movies and have the extended versions for all the 6 movies. I was excited to get the 4k version hoping to see an improvement and better experience with the movies. However, I was disappointed.

The colors look off in the 4k version. Feels like a made for TV print rather than getting the movie feel. If you think 4k should enhance the color rendition, you will be disappointed. The colors are either over saturated (in scenes shot in supposedly dark places like caves) or appear washed out. The sound quality is improved in this new set, but the picture quality seems like it took a hit.
20 people found this helpful

RobReviewed in the United States on December 31, 2020
5.0 out of 5 stars
A great prequel trilogy by Peter Jackson.
Verified purchase
No negative reviews for this order. The six disc 4K Ultra High Definition Blu-Ray Trilogy movie of Peter Jackson's Hobbit Trilogy, arrived today and undamaged. This boxst contains all three Hobbit movies, A Journey There And Back Again A Hobbits Tale, The Desolaution Of Smaug and The Battle Of The Five Armies, in stunning 4K UHD Blu-Ray and a Dolby Atmos soundtrack for all three movies. They can be viewed seperately as either a Theatrical Version or in the Extended Version, depending which version inspires you. Picture quality in 4K UHD and its Soundtrack puts the viewer into the heart of the action, especially epic battles, which are throughout in all three movies. Supported by a great cast, brilliant story telling and loaded with hours of extra features, documentaries and trailers and trivia abound, this purchase was well worth it from amazon.com and also for the price as well.
15 people found this helpful

Cameron KiesserReviewed in the United States on December 7, 2020
5.0 out of 5 stars
Perfect time to buy
Verified purchase
I never seen these movies except for the first Hobbit but from what I seen this is the perfect time to buy. So far I watched the EV of the first Hobbit and 2nd Hobbit. Looks fantastic and great movies. Can't wait to finish the series and finally understand what all the hub bub is all about.
16 people found this helpful
See all reviews
Back to top
Get to Know Us
Make Money with Us
Amazon Payment Products
Let Us Help You
EnglishChoose a language for shopping. United StatesChoose a country/region for shopping.
© 1996-2022, Amazon.com, Inc. or its affiliates