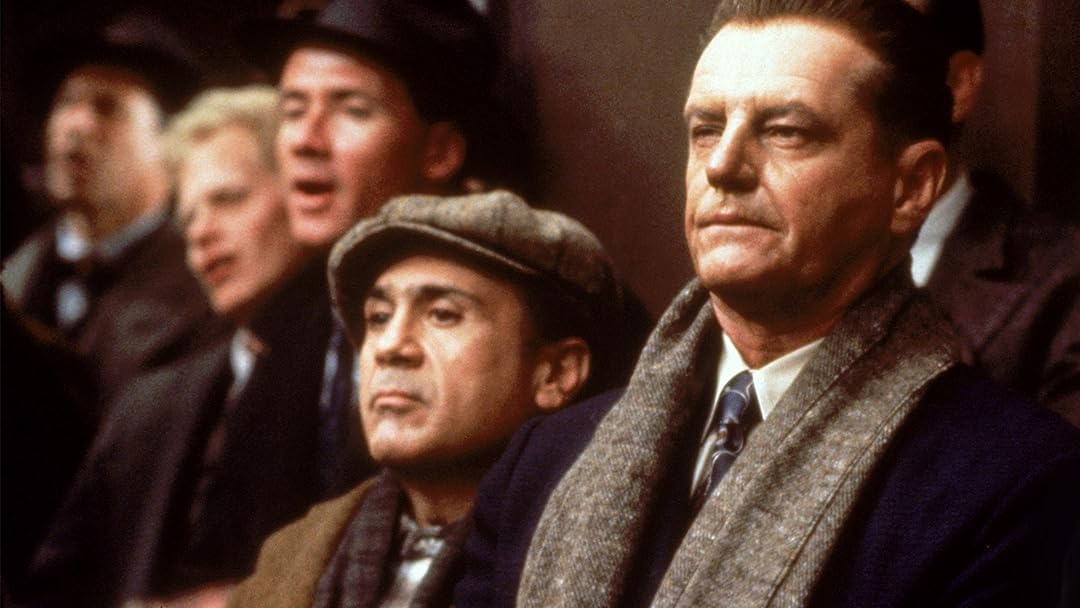 (1,620)
6.62 h 20 min1992R
The story of legendary union boss Jimmy Hoffa is recounted - from his days as a grassroots organizer, his rise to the top of theTeamsters, and the battles w/ both management and the mob that lead to his disappearance.

fenx1200Reviewed in the United States on January 1, 2018
4.0 out of 5 stars
Excellent Film.
Verified purchase
A great film with superb acting based on the true life events of Jimmy Hoffa. I especially liked the beginning of the film when the Idle Hour Laundromat was fire bombed by Jimmy, Bill, and DeVito. This stark symbolism sets the tone for the movie as the building goes up in an explosion and fireballs. Billy is severely burned and eventually dies of his injuries. While on his death bed, Billy tells the Priest nothing, but DeVito always tells the story that Billy said something nasty to the Priest, but I could not hear what was said, but it is evident that Billy is no rat, so to speak. So we have the Idle Hour going up in flames, Billy saying nothing on his death bed, and Hoffa paving the way for the formation of the Teamsters. The rest of the movie is about the formation of the Teamsters with strikes, Scabs, and busting heads to see this thing through, to fight for the common man. It's all about the money, as a pension is formed to the tune of 200 million, and then the mob moves in to borrow from the pension. Hoffa and the mob are bedfellows, with Robert "Bobby" Kennedy, as Attorney General trying to tie Hoffa to the mob, racketeering, and theft. It's an excellent movie, set in a time of radical change, with the assassination of John F. Kennedy, mob connections, lots of money, and the eventual hit that takes out Hoffa. His body has never been found to this day. I highly recommend this movie, and if you want to learn more about the true events, buy the book, "I Heard You Paint Houses." On a historical note, Jimmy Hoffa never smoked or drank, and did not like people around him who did smoke.
10 people found this helpful

WEAK HEART 4 LIFEReviewed in the United States on March 19, 2019
5.0 out of 5 stars
Jack Nicholson's best performance since bat man
Verified purchase
LOVE HIM OR HATE HIM YOU HAVE TO ADMIT IF THERE HAD NOT BEEN A JIMMY HOFFA THERE WOULDN'T BE ANY UNIONS TODAY MOST LIKELY. JACK NICHOLSON GIVES A POWERFUL PERFORMANCE AS JIMMY HOFFA. THE RISE AND FALL. NOW WORD OF WARNING THE PERFORMANCES ARE EXCELLENT THE STORY IS GRIPPING HOWEVER IT IS RATED R MOSTLY BECAUSE OF THE F WORDS I LOST COUNT ON HOW MANY TIMES THEY SAY IT FROM START TO FINISH. NOW FOR THE SPECIAL FEATURES IT HAS EXTENDED SCENES WITH INTRODUCTION BY DANNY DEVITO HISTORICAL NEWS COVERAGE, PERSONAL ANECDOTES WITH MEMBERS OF THE TEAMSTERS UNION, AND SPECIAL SHOTS.
7 people found this helpful

Yiannis PReviewed in the United States on November 8, 2016
4.0 out of 5 stars
A Very Persuasive Jimmy Hoffa
Verified purchase
A wonderful biopic on Jimmy Hoffa from his beginnings with the Teamsters, his struggles for greater power and control, to his demise and imprisonment following his entanglement with attorney general Bobby Kennedy. Throughout, the perspective is that of an imaginary fellow played superbly by Danny de Vito, who was also the movie's director. Jack Nicholson as Hoffa is eminently believable. Gone are all the usual facial expressions, from the raised brow to the satanic smirk. The tone of voice is different. His profile is even altered to fit better the Hoffa look. It's an amazing transformation worthy of Nicholson's acting versatility. The ending provides its own unique and surprising answer to Hoffa's disappearance. While not particularly persuasive, this ending offers the necessary closure. 4 1/2 stars.
6 people found this helpful

J. Alec WestReviewed in the United States on June 28, 2016
4.0 out of 5 stars
Almost perfect.
Verified purchase
Almost perfect. I live in the USA but have a DVD player that converts PAL to NTSC on-the-fly, allowing me to watch PAL DVDs on my NTSC television. The imperfect part was a latch inside the DVD case. It came loose during shipment and the DVD was rattling around inside. Fortunately, it still worked.

Hoffa is a good story of the birth of unionism in America. And links to organized crime "made sense." Considering the tactics early management used to force employees to work in unsafe environments and at low wages, organized crime was the only "muscle" they'd listen to.

In 2011, I retired from a 30-year career in a union shop. But, the union had a no-strike clause in their contract. Why? Because if management and labor could come to no agreement on a contract, an impartial mediator was appointed and BOTH sides were bound to honor whatever contract was arbitrated. This was copasetic to me since, when it comes to employers and unions, I've always believed that whatever "truth" there is at the negotiating table is found somewhere "in the middle."

But, during Hoffa's time, employers had no concept of (or respect for) "binding arbitration" and usually adopted a "my way or the highway" approach to employee relations. Nowadays, at least at my employer, things are more "civilized." But had it not been for Hoffa and people like him, that civilized state-of-affairs may never have come into existence.

Nicholson & DeVito were perfect in their roles as Hoffa and Hoffa's right hand man, Bobby Ciaro. And DeVito did a good job of directing the film, too.

joel wingReviewed in the United States on July 13, 2021
3.0 out of 5 stars
Nicholson and DeVito get to shine with their roles
Verified purchase
Hoffa focuses upon Jack Nicholson as Jimmy Hoffa and his lieutenant Danny DeVito reminiscing about their days in the teamsters. It begins with Hoffa leading a strike and the violence that ensued both by the Teamsters and against them. The second half is about Hoffa’s dealing with the mafia and the ensuing investigations. Hoffa’s rise and decline isn’t portrayed as a fall from grace but rather due to his blind ambitions.

This is the kind of role that Nicholson shines in. He gets that face and tone in his voice like in A Few Good Men and rolls with it. DeVito is great as well. There’s one scene where Nicholson is meeting with a mobster boss and DeVito sees a deer in the woods, pulls out his pistol and shoots it for fun. DeVito was the director as well.

Lisochka82Reviewed in the United States on September 29, 2021
5.0 out of 5 stars
NICHOLSON IS SUPERB!
Verified purchase
Ever wonder what Jimmy Hoffa was about? Ever wonder what the teamsters were all about? Labor union negotiations, the working man, everyday struggles and corruption on the streets of Detroit and the rest of the country. Nicholson absolutely OWNS this role. Forget the laughable Irishman where Pacino is embarrassingly bad and acts nothing like Hoffa did. Hoffa starring Jack Nicholson in a Danny DeVito film. I couldn’t help but get emotional from some of the scenes. Essential.

MichiganReviewed in the United States on December 19, 2015
4.0 out of 5 stars
Very enjoyable and super acting by Nicholson,
Verified purchase
Good movie, but not very accurate ending, however this came out before the Death confession in I heard you paint houses, which I believe is a very accurate telling of how Mr. Hoffa disappeared. Also Frank Sherran Hoffa's rt hand man was 6ft 4 Irishman and not five ft. It is a very good movie and explains a lot about Hoffa and the Teamsters Union and affiliation with the mobs involvement. A must read and a prelude to the upcoming film, I Heard You Paint Houses, which I cannot wait to see and add to my collection of movies.
6 people found this helpful
See all reviews
Back to top
Get to Know Us
Make Money with Us
Amazon Payment Products
Let Us Help You
EnglishChoose a language for shopping. United StatesChoose a country/region for shopping.
© 1996-2022, Amazon.com, Inc. or its affiliates