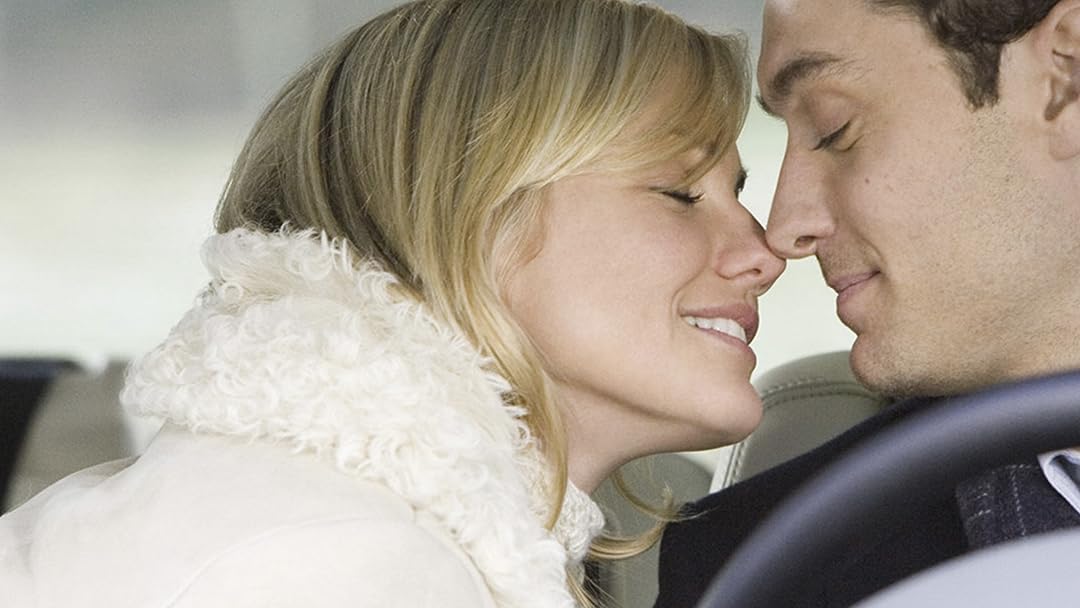 (23,557)
6.92 h 15 min2006X-RayPG-13
From writer/director Nancy Meyers comes a romantic comedy about two women on opposite sides of the globe who swap houses only to discover that a change of address can really change their lives.

Ms365USReviewed in the United States on January 3, 2018
5.0 out of 5 stars
Reason? Season? Lifelong Holiday?
Verified purchase
I definitely put this is the CLASSIC category. Not only has it become my movie of the month, next month and perhaps even the following, but it will be the movie I watch with every Christmas Holiday as I dream of and appreciate success, real and true love, odd found friendships that teach us greater life lessons than we ever thought possible, lovely friends, children laughing, presents that represent an expression of "I hear you, understand you and know what makes you smile." I love how, as each charactcer reveals themselves, you find yourself in each one. It's a love story in every regard, and it is a lesson as to how the universe rewards you well when you step out of your comfort zone and prioritize your own emotional well-being. The joy in life is you get to choose who you are going to be and the secret reveals which people are reasons, seasons, or well a lifelong Holiday... Cheers to the Holidays! Happy New Year!!!!
63 people found this helpful

Terrence WalshReviewed in the United States on November 24, 2017
5.0 out of 5 stars
Clearly a classic
Verified purchase
My wife and I watch this movie every year, and have done since 2006. It is one of our elite batch of worthwhile movies. We've watched it over a dozen times and never tire of it. It's a GREAT script, perfect cast, perfectly acted, and directed with whimsy, insight, and brilliance.

The chemistry of Jude Law with Cameron Diaz, and Jack Black with Kate Winslet is delightful. It is also a wonderful chance to see Eli Wallach. While the lead four actors sparkle, Wallach glows with the joy of performance at the age of 91.

The musical score gets a boost since Jack Black and Edward Burns each play Hollywood composers. The musical themes get more spotlight than usual as they weave magic and build continuity.

The movie also features Emma Pritchard and Miffy Englefield as Jude Law's daughters. The girls are absolute scene stealers. They give The Holiday a real-world anchor that most romantic comedies lack.

This movie could have suffered from too much sweetness but Rufus Sewell brings charm and vinegar in equal measure.

Every time we watch this movie we notice something fresh. Few movies offer that depth. In fact, depth is one of the proofs that a movie should be a classic.

I hope your experience of The Holiday may be as satisfying as it has been for me over a dozen times. Enjoy!

CBReviewed in the United States on December 21, 2017
5.0 out of 5 stars
PERFECT HOLIDAY MOVIE FOR HUMOR & HEALING!
Verified purchase
I love romantic comedies so I’m not sure how I missed this delightful movie all these years. The opening set-up starts a bit slow but builds into a more authentic story of women (and men) overcoming relationship mistakes. Nancy Meyers (writer/director) knows how to show complicated relationships in an un-complicated way! Thank God it’s not a male-bashing film nor does it tie everything up in a neat, little Christmas present. Jude Law’s kissing technique should become an international standard. This is a great couples movie or great for a group of (adult) friends and family. Just click PLAY, relax and enjoy this modern tale of love from L.A. to London!
37 people found this helpful

LittleSaraReviewed in the United States on December 24, 2017
5.0 out of 5 stars
Be prepared to swap holidays, learn about love, & smile without meaning to.
Verified purchase
This film is less a Christmas film than it is a Romance set at Christmas time on 2 continents, but it's still one of my favorite contemporary holiday films. I've watched it several times and it always takes a little while to get going, but, about halfway through (about "Mr. Napkin Head" time), I find myself smiling most of the time. Jude Law - charmingly comical. Jack Black - comically charming. Eli Wallach - a wonderful old-timer, a reminder of what the movie industry once was. Important messages about what love really is rather than what we so often think it is. Aside from a few 4-letter words and suggestive situations, it's a feel good film that actually does make me feel good.
26 people found this helpful

"sherry@assnpartners.com"Reviewed in the United States on December 13, 2016
5.0 out of 5 stars
A Christmas indulgence you won't want to miss
Verified purchase
The central theme of this movie is unrequited love and how four people learn to fall in love again. Nancy Meyers's film is impeccably crafted to deliver everything you expect in a holiday movie. The amazing cast gives heartwarming performances. As usual, Meyers's dialogue is at once witty and pithy. From the beginning scenes where Kate Winslet's emotion-filled character Iris discovers the love of her life (Jasper played by Rufus Sewell) is engaged to someone else and the Cameron Diaz character Amanda admits to live-in boyfriend (Edward Burns) of not being able to feel anything or to cry, you know their lives are destined to become intwined. When they decide to swap houses across the ocean at Christmas, the stage is set for chance encounters and romantic fun. From Beverly Hills, California to Surrey, England, the locations are perfect for holiday dreams. Gorgeous Jude Law shows up at the charming English cottage after Amanda arrives and the incomparable Jack Black finds Iris at her vacation swap Hollywood mansion. As each of the characters discovers something delightfully new about themselves, they are swept up with each other, and falling in love. What else could you want in a Christmas movie?? Bring on the eggnog and the Christmas cookies! Indulge!
24 people found this helpful

DorothyZReviewed in the United States on November 2, 2017
4.0 out of 5 stars
Good natured "holiday" film that isn't really about Christmas
Verified purchase
Good natured "holiday" film that isn't really about Christmas, but it doesn't matter. The four leads are all in their comfort zones and play to type and they all excel at their characters. The movie is sweet if not a bit generic, but you can't help but be intrigued by how everyone is intertwined in the movie as you see the various fish out of water scenarios play out. There is plenty of romance, and self discovery to be found amidst the beautiful scenery in both England and Los Angeles. The movie feels a tad longer than it should, but it takes itself seriously in a good way and exudes warmth. Kate Winslet and Cameron Diaz shine as polar opposites who trade houses for the holidays. It was nice to see Jack Black play someone a little less cartoony, and he's actually quite charming in the movie. All in all, nothing groundbreaking here, but it's a lovely and simple story that is quite enjoyable.
11 people found this helpful

Jeffrey JordanReviewed in the United States on December 26, 2020
5.0 out of 5 stars
Rom/Com At It's Best
Verified purchase
My movie for Christmas 2020. Down in a Deep Internet Rabbit hole, I happened across an interview that Stephen Colbert had with Kate Winslet. Colbert mention this film as a great Holiday movie even though it had almost nothing to do with Christmas. I scheduled it up for viewing on Christmas day.
I got two romantic comedies tales for the price of one ($2.99 on Amazon Prime). Aside from immediately creating in my mind the question, whatever happened to Carmen Diaz, one of our damsels in distress, I got sucked into the creativity of the writers when they contrived a house swap between Diaz and her equally lovestruck counterpart in Britian, Kate Winslet. We find Diaz's Character Amanda, who owns a company that develops film trailers, living in the proverbial lap of luxury with her home on Sunset Boulevard and her money driven life style, is in a terrible long term relationship with her boyfriend, Ethan, who is played by Edward Burns. I now there are going ot be women out there that are going to think how can any relationship with Edward Burns be bad, but trust me he sells it.
Amanda turns to the internet to find a place where she can just get away. She discovers a charming cottage in England and sends an inquiry. Iris is home brooding over her love interests announcement of his engagement to one of her co-workers. Iris is a reporter for a newspaper and gets the Christmas assignment to write about the couples wedding announcement. She in turn wants to get away.
Iris messages Amanda that the cottage is only available by house swap. Amanda agrees they both travel to the others home and the adventures begin.
Notable in this film are the many cameo appearances besides Edward Burns, the touching sub plot built around character played by Eli Wallach and what may have been a breakout role by Jack Black. Fair warning. If your going to tell two stories, you need twice the time. In this case, the running time is two hour and fifteen minutes. Oh yeah, there will be cute kids and dogs.

EnwendyReviewed in the United States on October 26, 2020
5.0 out of 5 stars
A New/Old Anytime Favorite
Verified purchase
There's something quite perfect about this holiday movie. I watched it many years ago and thought it was just a "nice" feel good movie. But as time goes on, there's more to it. Is it the time and place? Or just the unabashed way faith in love comes around no matter how unexpected, neurotic and miserable you are. Cameron Diaz is LA gorgeous, Kate Winslet, so genuine, English and lovely. Jack Black, funny and Jude Law is well..., you just can't stop staring at him, the camera loves him (and so do I) and the English countryside is a perfect backdrop for Law to star in this romantic getaway fantasy. Sigh......
2 people found this helpful
See all reviews
Back to top
Get to Know Us
Make Money with Us
Amazon Payment Products
Let Us Help You
EnglishChoose a language for shopping. United StatesChoose a country/region for shopping.
© 1996-2021, Amazon.com, Inc. or its affiliates