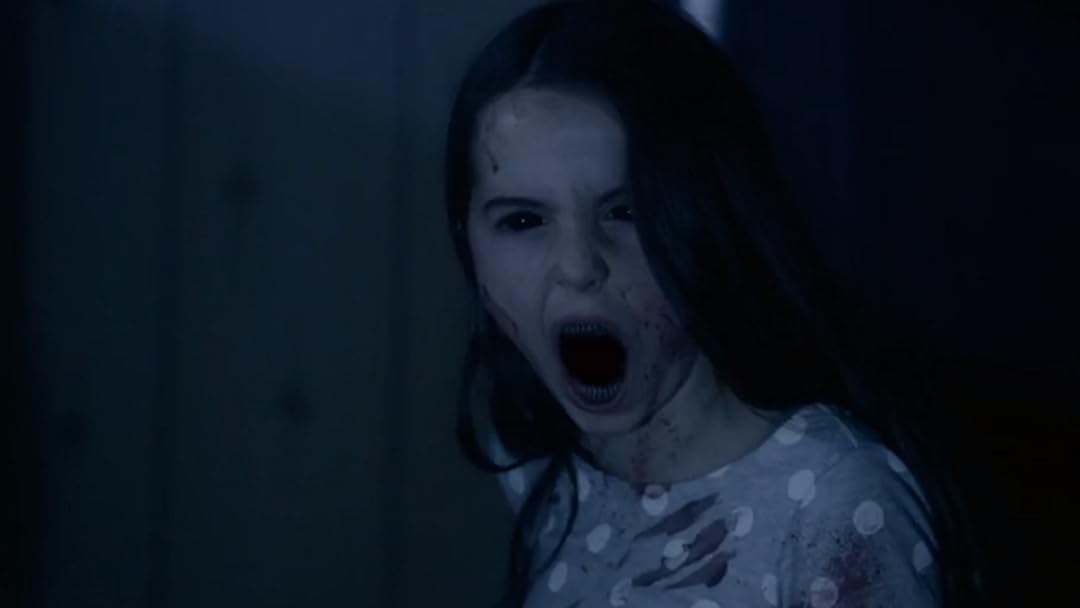 (184)
4.81 h 28 min201816+
Highly intelligent and malicious creatures known as The Hollow Ones live in the woods and entice children with their hypnotic folklore music. Samantha, a young foster teen, must fight to expose these dangerous supernatural impostors to save her younger sister who has been taken, otherwise her soul will be lost forever.

Aiex HaloReviewed in the United States on December 6, 2020
2.0 out of 5 stars
Loveable characters trapped in a stupid story
Verified purchase
Within like the first 10-15 minutes of the film, it's hard not to like the main characters here, particularly Sam and Olivia and Emily. All throughout the film, the actors do a spectacular job with each of them, doing much better than "avoid being annoying" and becoming genuinely endearing.

Unfortunately they are about the only strong point of the film, which decides to play itself safe, take no risks, and essentially retread and rehash everything done before in countless other, better horror films.

Sam is the "troubled child" adopted by a family in which the mother is apparently an empty-headed flake and the dad is almost comically hostile towards her. The only comfort in her home life is their natural daughter Olivia, whom she genuinely loves and cares for.

Then comes the horror part where Sam ditches Olivia a second time, making Olivia walk home through the woods while Sam hangs out somewhere. This time Olivia doesn't come home, and the family is traumatized. Days later, Olivia suddenly shows up in their backyard, seemingly confused by completely unaffected.

Almost immediately it's obvious that Olivia is behaving erratically, and all the cliche' horror movie tropes start playing out, with the Disbelieving Parents ("She's just acting strange because of the trauma she's been through"), the Town Nut who makes a scene in public ("Something's wrong with that girl, she's evil"), the Disbelieving But Supportive Boyfriend Logan who tags along with Sam in her quest to gather information, and the Hardnosed Cop who suspects Sam of committing atrocities done by Hollowed-out Olivia because Sam is the "bad girl" type who cuts herself and listens to heavy metal.

No one in this film is even remotely "genre savvy", stuck in a sort of hackneyed cliche' horror movie mindset of "There's no possible way there's anything remotely strange about this situation, obviously the Troubled Girl is just being a b***", to a point where it almost becomes a plothole in itself.

It's facepalmingly stupid when Sam tells her almost boyfriend Logan that Town Nut Alison's sister Janie disappeared years ago in the woods, returned mysteriously days later, started acting strange and now the exact same thing has happened with Olivia, and Logan says that's not at all suspicious. Not only is this EXTREMELY suspicious in such a way that should warrant actual police attention (even on the grounds of something non-supernatural, like a child-predator who's been abducting children for years), but later on Sam discovers this exact same cycle has been going on for literal decades, and absolutely no one in the town notices, cares, or sees any connection with what is happening now with Olivia.

Naturally, everyone just sticks to "Troubled girl is a b****, just ignore her" while evil Hollowed-out Olivia continues to escalate her mischief and carnage, terrorizing Sam all throughout.

This bland story setup alone isn't interesting enough to stand on its own, but it feels even further dragged down by just how absolutely certain and absolutely furious everyone is at the thought that Sam would have any problem with Olivia disappearing for a few days and returning unexpectedly and unharmed. We literally don't even see the cops show up after Olivia's return until it's time to harass Sam for something unrelated.

It's not just the fact that no one seems to care about Olivia once she returns, but it's the absurd lack of any sort of follow-up by anyone. Her parents literally don't even flinch when Olivia tauntingly kicks Sam under the dinner table, then grabs a handful of macaroni and chomps on it like a nutcase, but start getting agitated and hostile when Sam even mentions Olivia's disappearance. It's supposed to make the protagonist feel frustrated and crazy and it ends up making the audience feel like they're going crazy. There's literally one intensely violent scene between Sam and Olivia where Olivia is LAUGHING and SMILING and the parents don't even notice and say nothing about it.

The ending, once it comes, is a bumbling mess that happily ignores the mess made beforehand by Evil Olivia, and seems confused and undecided as to having a pointless twist ending, with the twist suddenly happening after the initial credits roll, in such a way that fails so miserably to shock that it's almost laughable. The entire scene leading up to the end is filled with a low, unsettling expectation of the coming twist, then suddenly it cuts to black, "Directed by" and "Written by" credits, then suddenly the twist comes crashing back in with loud sound effects, too soon to give us time to wonder, and too late to feel like an actual part of the film rather than a quick edit made after the film was done because someone forgot to put it in.

Oscar R. GarciaReviewed in the United States on December 12, 2020
4.0 out of 5 stars
Great movie (except last 15 seconds -1 star)
Verified purchase
An older foster sister with a history of trauma is confronted with even more struggles when her younger sibling goes into the forest and disappears laying the blame upon the foster sister. A blame that only gets worse despite when a day or days later the younger girl returns... a little different.

Things I liked: Superb acting, especially the younger sister. There IS a monster not some stupid pretend its a monster when it is a jerk in bad makeup. Nor did they employ the grey-makeup walk upside down like a crab bologna. Limited use of CGI but very well applied. Great lighting effects, especially the misty forest. Well placed supernatural elements, oh, and there were supernatural elements none of the ambiguous bs about was it a monster or not. The fights were pretty tense because of the established creepiness of the young sister. There were no because plot... moments, usually when an older sister loses a younger one in these movies it is the case that the situation was an impossible one and yet the parents blame them. Not so in this case, the writing smoothly set up a situation where her choice was realistic and the fallout from it was real and not a because plot.. instance of false guilt. She screwed up and realistically so. This reminds me somewhat of "My Brother Went Missing in the Woods for 6 Months" creepypasta but unlike most films based on these kernels this one didn't suck. The film makers did a great job on the overall presentation.

What I didn't like: The last 15 seconds. Hated it, otherwise I would consider this a 5-star cosmic or at least a supernatural horror grade movie except for that last little bit.
3 people found this helpful

Aslat8Reviewed in the United States on August 25, 2019
4.0 out of 5 stars
Really great kids scary story
Verified purchase
For children, this would be a really great Halloween movie. No nudity, swearing , sex, very minimal violence. SPOILER ALERT: Good story about an adopted gril fitting in with her new family and fighting off the monster to redeem herself.

FOR ADULTS DECIDING whether to watch or not, I did not find this any scarier than any after school specials. And there was nothing else about it to make it a great adult scary movie. I gave it 4 stars because it is great for a kids movie, for what it was meant to be I'm sure. I have seen better so not 5 stars.
8 people found this helpful

Amazon CustomerReviewed in the United States on October 20, 2018
4.0 out of 5 stars
Don't listen to the negative reviews, give it a chance
Verified purchase
I really liked this movie. It was creepy and scary. I happen to like movies with creepy, scary children in it. Sam is a foster child placed in a foster home after leaving a group home. She has a younger foster sister that goes missing in the woods one day and when she returns she seems a little off. Suspense and the creep factor gets intensified as you begin to find out what is going on. The ending was a little predictable but it was good. I enjoyed this movie and was pleasantly surprised by it.
6 people found this helpful

MatthewReviewed in the United States on March 9, 2019
4.0 out of 5 stars
Pretty good overall
Verified purchase
Liked:
The characters were actually pretty likable in my opinion. The story-line wasn't bad. Character decisions in this movie aren't incredibly bad/stupid and don't leave you feeling like you're watching a typical dumb horror. i.e., I never yelled "don't do that you idiot!" at my tv screen while watching this, so you don't have to suspend your disbelief too much for this movie, which is good.
Disliked:
Not a very violent movie overall in my opinion. Not a lot of depiction of the creature. Maybe a tad too much focus on the family drama, but maybe that character development is what makes the movie good?
2 people found this helpful

Jonathan M. BermanReviewed in the United States on May 29, 2018
4.0 out of 5 stars
Not Bad Pretty Good
Verified purchase
THE HOLLOW CHILD
My Rating: 4/5
Where? Amazon Rental

Evil wood nymphs blame mankind for what they've done to the earth, with some solid messages about growing up as a teen, problems with love, sexuality, control, ultimately it was a pretty good movie and I'd recommend it... not sure how I feel about that ending, nothing to make or break the film.
5 people found this helpful

M. TURNERReviewed in the United States on May 25, 2018
3.0 out of 5 stars
It's a good-looking movie with fair to good acting but not enough story to fill the runtime.
Verified purchase
It's visually excellent and well-performed. The premise is interesting. That said, the script is a bit lacking, and there's quite a bit of what feels like padding to make this more than a 45-minute episode of a horror anthology tv show. I would have rathered rate this film a 2.5, but alas, no can do on Amazon.
6 people found this helpful

Paul M.Reviewed in the United States on August 17, 2021
5.0 out of 5 stars
Good horror and writing
Verified purchase
The story was believable, entertaining, and the acting was great all around. I have to give it to the little girl actress, she has a great on-screen presence and all all the facial queues on point. The scenes flowed well and characters portrayed to where the viewer felt an attachment.

Excellent story telling , Excellent horror.
See all reviews
Back to top
Get to Know Us
Make Money with Us
Amazon Payment Products
Let Us Help You
EnglishChoose a language for shopping. United StatesChoose a country/region for shopping.
© 1996-2021, Amazon.com, Inc. or its affiliates