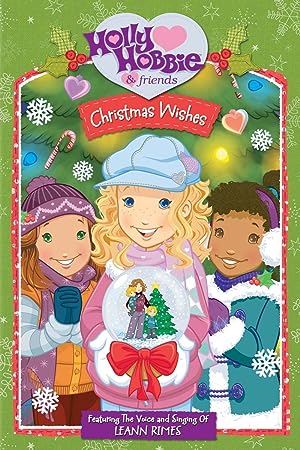 (55)
7.148min2007ALL
Holly and her best friends Amy and Carrie know exactly what they can do to help spread the Christmas Spirit. The Hey Girls Club go caroling, make snow globes, and bring Christmas cheer to a special family in need. Grammy Award winner LeAnn Rimes plays a supporting role.

Z HayesReviewed in the United States on January 5, 2013
5.0 out of 5 stars
Holly and friends learn the spirit of giving during Christmas
Verified purchase
My almost eight-year-old daughter loves Holly Hobbie, a character she has only recently been acquainted with. In a world of garish characters like those from Monster High and over the top silliness, I find Holly and friends to be refreshing, down-to-earth characters.

In "Christmas Wishes", Holly reminds her brother Robbie that one of the best things about the season is giving. She gets a chance to put this into practice when she comes across a sad young widow with twin boys who lost their father the previous summer.So Holly and her friends who form the Hey Girls Club put their thinking caps on to figure out what they can do to pass on some holiday cheer to the grieving family.

My daughter and I have only watched two Holly Hobbie DVDs so far, including Best Friends Forever, and we look forward to catching up with the rest of the shows. The running time on this DVD is 44 mins.

SocSweeper8Reviewed in the United States on December 8, 2012
5.0 out of 5 stars
Holly Hobbie Christmas Wishes
Verified purchase
Watched this video with my 6 y/o daughter and we both enjoyed it. Was refreshing to see a Christ-centered Christmas storyline as opposed to Santa-centered... not that there is anything wrong with Santa...he is also featured in this video as well, but the real meaning of Christmas is not forgotten is all that I mean. They have a Christmas pageant, sing 'O Holy Night', and shed light on the importance of 'giving' to others rather than 'receiving' at Christmas. Wholesome story that moved along and maintained interest. Great alternative to some of the others out there that possibly foster poor values in girls. Great music and great message. Kudos to the producers of this one - a true gem IMO.
One person found this helpful

Constance ThomasReviewed in the United States on June 7, 2007
5.0 out of 5 stars
Very cute, and short
Verified purchase
My girls love this movie! They are three and two, and this is all they want to watch since it came in the mail two weeks ago. The story is cute, and well written. I love that they describe the Christmas season as celebration of the birth of Jesus which it is.(They put that in the pagent parts), but still included some silly santa stuff. My husband and I have watched it with them, and we laugh at the same times they do. They also show the discription of a loss of a loved one, and how people deal with that kind of event emotionally. I appreciated that they described this all very clearly and beautifully in a way that my little girls can understand. Good family movie.
2 people found this helpful

Joshua C.Reviewed in the United States on January 12, 2020
5.0 out of 5 stars
came in perfect condition
Verified purchase
Loved this movie !!

Donna PatrickReviewed in the United States on January 4, 2021
5.0 out of 5 stars
love this movie
Verified purchase
great family movie

Michelle ThomasReviewed in the United States on January 4, 2019
5.0 out of 5 stars
Warm fuzzies for Christmas
Verified purchase
Love this movie, even as an adult.

A. RockettReviewed in the United States on December 18, 2007
5.0 out of 5 stars
So glad Holly Hobbie is back
Verified purchase
I'm so glad Holly Hobbie is back! My 5 year old loves her and we watch this movie over and over. Holly and her friends are updated and cool but still sweet, caring and funny. Perfect for younger girls and a great distraction from Hannah Montana. I will definately buy more videos. We love the books and I know my daughter will love the design doll for Christmas. I definately recommend her - I think girls age 8-11 would still like her too (Holly is 10 years old).
One person found this helpful

Dana SnowReviewed in the United States on May 31, 2017
5.0 out of 5 stars
Five Stars
Verified purchase
Daughter loves it
See all reviews
Back to top
Get to Know Us
Make Money with Us
Amazon Payment Products
Let Us Help You
EnglishChoose a language for shopping. United StatesChoose a country/region for shopping.
© 1996-2021, Amazon.com, Inc. or its affiliates