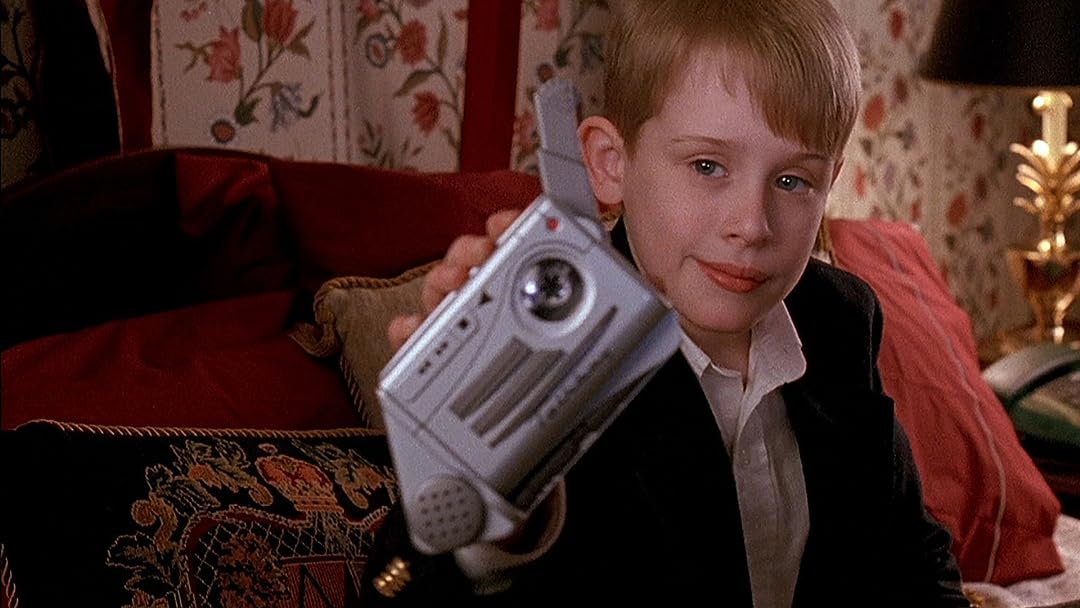 bazaar ladyReviewed in the United States on September 24, 2022
5.0 out of 5 stars
Our young grandchildren really enjoyed this movie.
Verified purchase
Our 6 and 4 year old grandchildren were visiting for the weekend and wanted to see this movie. They had seen the first movie in this series. It held their attention right to the end even though it was 2 hours long. They laughed Dr brutal times. I had seen it years ago when it was first released and found it entertaining.

lisa YanezReviewed in the United States on August 12, 2022
5.0 out of 5 stars
Great Christmas movie
Verified purchase
This is one of my grand daughter’s favorite movies. She’ll watch all year!

James PersonReviewed in the United States on December 20, 2012
3.0 out of 5 stars
The Title is Misleading, but it Captures the Angst of Being Alone During Christmas in New York
Verified purchase
As a single man in New York with no one to spend the Holidays with, I try to calm down over the fact that I am all alone by watching Christmas films and drinking copious amounts of Italian table wine. I have watched many Christmas films this month. I found Elf to be a story that parallels to my own life (never really knowing my parents and being much taller than the people from my village). Die Hard made me reflect on trans-national terrorism and consider the fundamental undertones of capitalism around the Holidays. Having spent years wondering what the world would be like if I was never born, It's A Wonderful Life speaks to my soul. Richie Rich's Christmas Wish is also a fine film that reminds New York bankers like myself that you can have all the money in the world, perfect hair, great teeth and a love for neck scarfs, but you can't save Christmas without friendship...

Recently, I stumbled upon the film Home Alone 2: Lost in New York. Feeling lost myself in a city of eight million people, I picked it up. Figuring from the box that the main character had been alone at home once before in his life, I figured that the sequel was going to be about his ability to overcome his loneliness in a town full of strangers.

Boy, was I wrong.

This movie is a glaring expose about the dangers of American society in the late 20th century, the shocking rise of identity theft, the lack of protocols on flights across the U.S. airspace, the ease of criminals breaking out of Illinois jails, and the proliferation of Pigeon women living in the roofs of choir halls.

First off, the title is an absolute lie. He's not even home. He's from Chicago, and this is a movie about New York. How can you be "home" when you're 790 miles away and you FLEW THERE only because the pre-9/11 protocols were so inept. I mean seriously, you didn't even need to have a ticket to get on the correct plane back then. He just crashes into a stewardess and says "My family's on that flight... let me on." Sure... We don't need your name... jump aboard. Maybe the only thing I'm thankful for this Christmas is the TSA and their ability to keep rogue passengers off planes. And did I mention he's leaving his home, not going home to be alone there by himself.

Second, the box is VERY MISLEADING. Look at the box, and don't make the same mistake that I did. The villains in this film are actually human size... not the size of the Empire State Building... This sort of false advertising is destroying our culture from within.

So here's the gist. He goes to New York, and he just happens to check into a hotel, which is not really alone either. Just knock on anyone's door and poof, you're together with someone. Rob Schneider wanted to hang out with you... Then you wouldn't be Alone. That's what this movie should have been called... "New York Together... Too" Even Tim Curry was there, and he doesn't say a word when a kid checks into the most expensive hotel in the world after playing a tape for the hotel booking agent to make a reservation with the voice of a mongoloid. Did anyone think that a 9-year old could really be a criminal mastermind and steal credit cards? What the hell kind of society were we living in? Tim Curry didn't even ask for ID (And don't get me started on the scene where Curry sneaks into the bathroom to sneak a peak at the non-existent father in the shower). Let this be a lesson to owners of Diner's Club cards. Write "Check ID" on the back, and they'll return your thieving children to you.

Then, two bad guys, who I guess were in the previous film, busted out of jail, and found themselves in New York. Did anyone work in that jail or did Illinois have cutbacks and only have one guard working that day... And again, they too were not "home," nor were they "alone," because they are sort of a bizarre slapstick couple that refers to themselves as the Sticky Bandits -- even though the box has them listed as "Wet Bandits." This is a Christmas movie, I swear.

The film climaxes in a very stunning series of events where the two men attempt to capture the little kid. Again, I didn't see the first movie, but I assume that the young kid owes them money. They proceed to chase him through an abandoned house right in the middle of Manhattan. Naturally, this movie is nonsensical because there's no possible way that the New York building code would have allowed a house with that sort of property value to decay into a pit of despair.

The only person to touch a woman was the nine-year-old when he gooses a woman on the street, thereby again showing the serious problems with public groppings in our society back then. If anything, this movie was likely a training vehicle and justification for the expanding police state.

The primary highlight was the arc and story of Dunkin's Toy Chest, where the boy ends up stopping a botched robbery to steal thousands of dollars from sick children. But this again is just a sign of the moral and societal decay that infested New York in the late 1990s.

But the toy shop itself was really sweet. It reminded me of when I used to stick my head into dollhouses so that I could feel like a giant. I miss those days, and must say that Hollywood has a lot of work to do. In conclusion, New York City is a land of contrast... thank you.

Ubuike3Reviewed in the United States on May 31, 2022
4.0 out of 5 stars
Materials
Verified purchase
NA

Sean ParaukaReviewed in the United States on November 13, 2003
4.0 out of 5 stars
&quot;HE'S BACK!&quot;...
Verified purchase
Kevin McCallister is back again. This time he's not at home by himself. This time he's in New York City! This Christmas sequel is as just as good as the first one. Kevin is back in action against The Wet Bandits: Marv (Stern) and Harry (Pesci). Let's see what tricks and schemes Kevin has up his sleeve this time.
Once again, the movie starts out at the McCallister home and his family is running around back and forth getting ready for their Christmas trip to Florida. Kevin's father Peter (Heard) accidently unplugs the alarm clock and forgets to reset it! The next morning they sleep in AGAIN! So now the family, including Kevin is running through the airport trying to make the plane. Kevin stops in the airport to change his batteries for his talkboy and starts following another man wearing the same jacket as his father. Uh oh! Kevin gets on the wrong plane! He arrives at the airport and realizes he's in New York! "YIKES! I DID IT AGAIN!"
At first Kevin thinks of this as a good thing. He tours the city including the Twin Towers. Then he schemingly checks into the Plaza Hotel. He eats whatever he wants and watches whatever he wants. Here's the problem: THE WET BANDITS ESCAPED FROM JAIL! They fled to New York where Kevin is. When Kevin is walking the streets, Harry and Marv see him and they seek revenge. Also while Kevin is temporarily abducetd by them, Marv reveals their plans to rob Dunkin's Toy Chest at midnight on Christmas Eve becuase of the idiot he is. Now that Kevin's escapes from them he realizes he has to go back into action against them and stop the robbery. Luckily Kevin's Uncle Rob has a apartment in New York that their renovating. Since no one is home, he uses the apartment as the battle grounds. He rigs the entire house full of gadgets. It's midnight! Kevin sees Marv and Harry inside the store robbing the place. Kevin throws a brick through the window to make the alarm go off. Marv and Harry is furious. "LET'S GET HIM!"
Back to the apartment. Kevin is taking out the Wet Bandits with his gadgets. Marv gets electricuted, a concrete bag falls on his head, falls through a floor. Harry has a bag of tools fall on his head, and his head is on fire again. See what Harry does to put out the fire. Finally the cops arrest them once again.
Kevin's family has now arrived in New York and his mother Kate (O'Hara) goes out to look for him. Luckily she finds him at Rockefeller Center. Kevin is once again reunited with his family for Christmas. This movie is THE PERFECT SEQUEL! It picks up right where the first one left off. This is the perfect fmaily movie to watch with your kids around the holidays. Merry Christmas! Ho, Ho, Ho!

Ray BellingerReviewed in the United States on June 27, 2022
5.0 out of 5 stars
As advertised
Verified purchase
As advertised

MaggieReviewed in the United States on June 3, 2022
5.0 out of 5 stars
Good family movie,
Verified purchase
Rented to watch with my grandson he laughed so much. Good family movie

BBReviewed in the United States on December 22, 2020
5.0 out of 5 stars
One of my favorite Christmas movies ever
Verified purchase
This movie is so funny. The scenes of NY at Christmas are a delight. Its a well woven story - with something for everyone. I like the kid’s idea of fun more every time I watch this. Things like room service with the best ice cream creations ever. A steaming hot cheese pizza all to yourself, In a limo, watching the Grinch. The toys doing their thing at Duncan’s toy store, as kids and their parents play together. The NY Philharmonic orchestra playing great music while you & your new friend get to know one another, in a way that matters. “Saving the day” against bumbling bad guys Pesci & Stern - again. Being back with mom & dad O’Hara & Hurd who are also very enjoyable to watch. And the “three stooges” hotel staff sooo good, just really love this movie. Even better than Home Alone (one) less slapstick humor and more actually fun. It picks up where Penny Marshall left off when she got Tom Hanks to be the kid in the movie “Big”. A second truly perfect comedy about a kid, with all sorts of pleasure for adults who are watching too.
4 people found this helpful
See all reviews
Back to top
Get to Know Us
Make Money with Us
Amazon Payment Products
Let Us Help You
EnglishChoose a language for shopping. United StatesChoose a country/region for shopping.
© 1996-2022, Amazon.com, Inc. or its affiliates