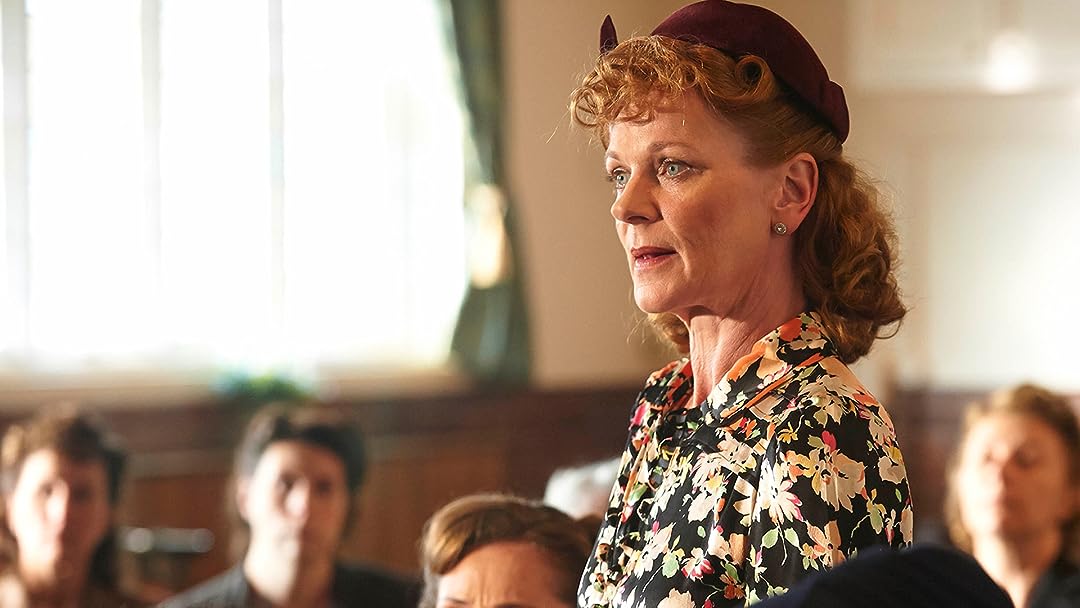 (2,543)8.22015X-RayTV-PG
Separated from husbands, fathers, sons and brothers, a remarkable group of women find themselves under extraordinary pressures in a rapidly fragmenting world.

StargazerReviewed in the United States on November 3, 2015
5.0 out of 5 stars
Excellent show but don't buy the Amazon Instant Video version of it
Verified purchase
The show is excellent. It easily deserves my 5 star rating.

The problem I have is that Amazon is selling edited versions of the episodes. If you go to the PBS Masterpiece website and view the episodes there, you will see that each is 52-53 minutes in length. However, the episodes for sale on Amazon Instant Video are 46-47 minutes each. About 12% of each episode has been edited out. If I hadn't already watched a few of them on the PBS site, I might never have noticed the difference but when I began to re-watch them here, I noticed some scenes were missing.

I'm really disappointed with Amazon. They have the clout to demand that the series producers give their customers the unedited versions but they didn't do it in this case.

FrancescaReviewed in the United States on June 18, 2017
5.0 out of 5 stars
Wonderful! Authentic & Brilliantly acted - and yet another superb show canceled... why if you please?
Verified purchase
This kept popping up for me to view and at first I did not watch as I
wasn't sure I would enjoy the setting... war time. But the appeal of
watching two extraordinary actresses : Francesca Annis and Samantha
Bond.. drew me in in the end. So glad I watched. I felt the first
episode had to take time to set the stage and the characters and from
there it just got better and better.

I can remember my Mother talking about the second world war and what
the women did in particular during that time. I feel as though this
series really captured the essence of the strength of the women and the
strength of people, women and men, when outside threats bring a
community together. I loved how the small arguments between the WI
members at the beginning fall away into respect and friendship as the
months continued.

Of course Francesca Annis and Samantha Bond are outstanding but so are
the rest of the cast, women and men alike. Claire Rushbrook, with whom
I am not familiar as I have lived in the US for many years, is
absolutely outstanding in the role of Pat Simms. As for Mark Bazeley as
Bob, her cruel & vindictive husband, he's terrific, I just wanted to
punch him!

The authenticity of the locations, sets, clothing, make up etc is first
class and it must be quite hard to achieve that.. we are talking about
a time which is now 80 years ago.

Like other reviewers, I am dismayed that ITV canceled it. I recall the
same reaction when BBC canceled 'Merlin" ... even though Merlin had
more viewers than Home Fires. It seems that viewing figures of 5 - 6
million is not enough to constitute keeping a show going. I wonder what
the other long running dramas get ? I simply refuse to believe that
more than 50% of the general public want to watch the boring, CGI,
violent, blood spattering, badly acted rubbish that is in most shows
nowadays. That stuff is being marketed consistently and yet it is these
shows, portraying a time when communication between men and women and
people in general was gentler, more respectful and shows humanity that more and more people want to see.

Thank you to the producers, director, cast and production crew for
making such an authentic and engaging show.

I hope that some other production company will have the courage to take
this up and continue the story. Amazon, Netflix, Hulu... are you
listening?
26 people found this helpful

M. D. PhelpsReviewed in the United States on November 10, 2015
5.0 out of 5 stars
Fabulous Series (but edited version offered by Amazon)
Verified purchase
This is an excellent program - well worth investing your time and money in, HOWEVER I believe Amazon is selling us the Abridged/Edited version for $9.99. I was very disappointed watching the 6th episode last night on Amazon to discover at least 2 segments were cut and edited out from the PBS airing of the same episode I watched on PBS Sunday night. I would not have bought the season subscription from Amazon if I knew it wasn't the official UK version.
118 people found this helpful

SCHOOLFSDReviewed in the United States on April 11, 2017
5.0 out of 5 stars
Best show you aren't watching
Verified purchase
It's the best show you aren't watching. As a die hard Downton fan, and Masterpiece nut, I was disappointed with Victoria, but happened to tape Season 2 Ep 1 of Home Fires and was hooked. I am not sure how I skipped the first season, but was happy to see it on Prime and watched the season in a weekend. The acting is wonderful, and you haven't seen these actors all over everything. Excellent show. Will really tug at your heartstrings, the characters are so believable and you really pull for them. It is a little depressing, but this was WWII and you get a feel for what they went through and how difficult it must have been. The scenery is AMAZING! TERRIBLY DISAPPOINTED to see there will not be a Season 3!!
16 people found this helpful

McPotterReviewed in the United States on June 1, 2016
4.0 out of 5 stars
Women's Perspective as WWII Invades a Small Town
Verified purchase
This series an engaging look at the struggle to adapt as WWII begins to invade life in small town England. The women of the town are the primary characters with their husbands, lovers, sons, and friends providing glimpses into military life. The women are all members of the local Women's Institute (WI) and this organization provides the backdrop for much of the action. Most episodes focus on interpersonal struggles between the characters and how they deal with the coming changes, while some episodes delve more into the stark realities of what war means. The characters are well developed, even the ones you love to hate. While many of the episodes are quite serious, there a moments of levity that keep the show more light-hearted. The series feels inspiring rather than depressing. I'm really looking forward to the next season.
31 people found this helpful

Amazon CustomerReviewed in the United States on June 16, 2017
5.0 out of 5 stars
Love, Love
Verified purchase
Love, Love, Love this show! There really aren't enough shows that demonstrate the resiliency and dedication of women at home during WWII. I thought this show was very tastefully done and it explored many different situations in which a woman might find herself in the late 1930's to early 1940's. I have only watched this show on Amazon, not PBS so I was not aware of some shows being "edited" or shortened so I will have to go watch the whole thing again on PBS...darn. ;)

The music in this show is absolutely glorious! There were a few slow moments in the show and the music was what pushed me on to the next episode. I would highly recommend purchasing the soundtrack as well ($10 on iTunes or available for free streaming on Amazon [[ASIN:B01EY6D688 Home Fires (Music from the Television Series)]]. I am excited to see the second season and heartbroken that the show has been canceled! If you weren't aware, the director is publishing the rest of the series in the form of books. You can find them on Amazon if you are dying for an ending. Also, if you're looking for a period drama to help fill the gaping hole left by Home Fires, you might want to check out The Crimson Field [[ASIN:B0105OHR4W The Crimson Field Season 1]] which can also be streamed for free on Amazon. Be warned, it was also not renewed which is obviously a huge travesty!
8 people found this helpful

BrandaReviewed in the United States on November 3, 2015
2.0 out of 5 stars
Disappointed..Not the full Episodes
I watched the first episode on PBS and liked it. My sister bought it to show our parents and we were extreamly disappointed. It is missing about 20 minutes of content, which really took away from the story for me. If the Amazon version had not been cut I would have given it a 5 star rating.
195 people found this helpful

Paula B CampinReviewed in the United States on October 31, 2017
5.0 out of 5 stars
Binge worthy!
Verified purchase
I have not seen the British version of this so I can't speak to the cutting of scenes in the PBS version. I love this series and wish there would be a third season. Why do they cut a show when it's so good! What were they thinking? Both season I and II are quite good. I also found this educational since it deals with what women in Britain were doing for the war effort. They are to be admired for what they did. The strength and sass of these women keep me coming back for more and more. I am always on the lookout for programs dedicated to this time period and how people coped with their situation. This is a great bird's eye peak into the war and how the people left in the small villages coped with life. The mix of drama and bits of comedy made for a splendid binge fest. The sets and wardrobe are very good too. I was transported back to another era and couldn't wait to see what was next to come. I usually like anything that makes it to Masterpiece Theater and this did not disappoint.
See all reviews
Back to top
Get to Know Us
Make Money with Us
Amazon Payment Products
Let Us Help You
EnglishChoose a language for shopping. United StatesChoose a country/region for shopping.
© 1996-2021, Amazon.com, Inc. or its affiliates