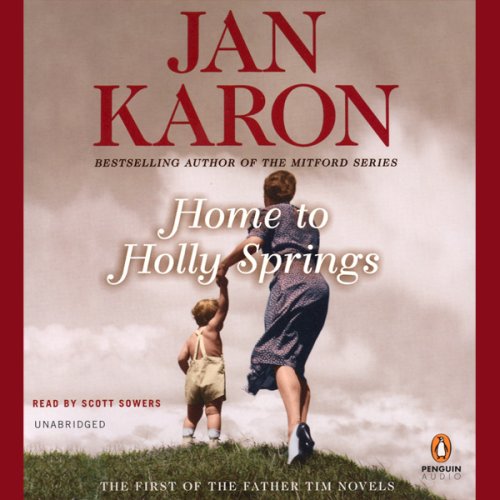 Home to Holly Springs: The First of the Father Tim Novels

Jan Karon (Author), Scott Sowers (Narrator), Penguin Audio (Publisher) & 0 more
4.8 out of 5 stars 1,367 ratings
See all formats and editions
Sorry, there was a problem loading this page. Try again.
Join Father Tim on a profoundly personal journey back to his childhood home.

Thirty-eight years have passed since Father Tim Kavanagh left his Mississippi hometown, determined not to return. Then he receives a handwritten note postmarked Holly Springs. Cryptic and unsigned, it says only Come home. These two words compel him to make the most challenging journey of his life.

Traveling to his boyhood home doesn’t merely take Father Tim across hundreds of miles. Thanks to a thousand sights and smells, he also travels back through memories—some fond and some he’s tried for nearly forty years to forget, from his quick-to-anger father and his lovingly tender mother to the picturesque small town he’d tried desperately to leave behind. And once Father Tim discovers who was behind the mysterious note, a truth is revealed that will change his life—forever.
Read more
©2007 Jan Karon (P)2007 Penguin Audio, a member of Penguin Group (USA) Inc.

Special invitation from Audible!
Learn more about Membership
List Price: $31.50
You Save: $3.94 (13%)
By completing your purchase, you agree to Audible’s Conditions Of Use
Sold and delivered by Audible, an Amazon company
Share

4.8 out of 5 stars
4.8 out of 5
1,367 global ratings
How are ratings calculated?
To calculate the overall star rating and percentage breakdown by star, we don’t use a simple average. Instead, our system considers things like how recent a review is and if the reviewer bought the item on Amazon. It also analyzes reviews to verify trustworthiness.
Top reviews

Anahita
5.0 out of 5 stars Karon Gets Real
Reviewed in the United States on July 18, 2015
Verified Purchase
I gather there have been some complaints about this book: it is not as sweet, soft and comforting as Karon's other books. It is, in fact, honest and raw and human, and I think it is her best book yet. I was raised as a Protestant, and I watched those around me, who attended church on Sunday mornings, abuse themselves and their children. I watched them cheat on their spouses and their taxes and generally behave very badly indeed, and yet assure themselves and others that "we are all going to heaven because God forgives, and we go to church on Sunday morning." Unfortunately, this includes the clergymen of my community, not just their "believers." I do believe in forgiveness, but not hypocrisy, and I left so-called Christianity behind at an early age. This does not mean that I have no belief in God or the true Christ, but the organized church has completely missed the mark in terms of its doctrinal enforcements and rationalizations, in my opinion. Karon's early books were, I thought, charming, and indeed sweet and comforting...but that was all. In this book, her protagonist returns to his beginnings, and we see why he truly is the way he is. Her characters and the stories they tell are often chilling, and we see and feel--viscerally--the pain this man lived through growing up. I continue to find his little homilies largely meaningless, as well as her tendency to keep him on his throne, but he himself emerges as a very real person, and I salute Karon for her honesty and willingness to get her hands dirty in this book. I wonder if her readers will let her change?
Read more
27 people found this helpful
Helpful
Report abuse

Amy Biggerstaff
5.0 out of 5 stars This book has been unbelievably good! I work at a nursing home as the ...
Reviewed in the United States on July 17, 2018
Verified Purchase
This book has been unbelievably good! I work at a nursing home as the Activity Director. We have been reading the Mitford Series in our book club for the past 3 1/2 years. My residents and I truly love the series. We were skeptical as we began this book due to the short descriptions on Amazon and in the beginning of the book describing it as not as "warm and fuzzy" as we have been used to enjoying. We have absolutely loved it! The historical aspect of the book has been great for our older residents who could remember when times were like those described in the flashbacks from the past and we all loved all the times in the book when were we hanging on the edge of our seats in suspense or were blown away with the way Jan Karon so craftily revealed all the characters we have always heard so much about throughout the series. Yes it has had it "heavy" times with hard flashbacks and difficult things to read through but we have absolutely loved every minute of it! Outstanding job Jan! You have really entertained us this time!
Read more
9 people found this helpful
Helpful
Report abuse

Penny Stone
5.0 out of 5 stars A wonderful read!
Reviewed in the United States on October 31, 2017
Verified Purchase
I wish I could spend a day with Father Tim! Karon brings her characters alive so that they are fully developed, fully rounded people who are so real and alive that it's hard to put one of her books down and walk away from. This book continues Tim's life as he returns to his childhood home for a mysterious visit. It's a mystery to him because he receives a plain note that says "Come home." He doesn't know who sent it. But as he prays about it, he realizes he must go. He discovers the entire trip is God ordained and not just for his benefit. This is probably my favorite book in the Father Tim\Mitford saga yet.
Read more
10 people found this helpful
Helpful
Report abuse

Joanna McKenna
5.0 out of 5 stars A surprise lurks in Father Tim's past!
Reviewed in the United States on August 16, 2015
Verified Purchase
I'd read library copies of "Home To Holly Springs" and "In the Company of Others" years ago and loved both, but oddly had never got around to purchasing my own copies, which left a gap in my Mitford/Father Tim collection. The gap became more pronounced, though, when the long-awaited "Somewhere Safe" came out, because once a year or so I read the entire series from beginning to end. Now the collection is complete, and I look forward to another long visit with Father Tim, Cynthia, and all the other memorable characters who insisted on being part of Jan Karon's world for so many years. One of these days I may get brave and try the recipe for the infamous Orange Marmalade cake in the Mitford Cookbook!
Read more
10 people found this helpful
Helpful
Report abuse

James D. Thomson
5.0 out of 5 stars FIVE STAR PLUS
Reviewed in the United States on April 28, 2017
Verified Purchase
I have long been a fan of Father Tim, but this novel is a cut above! Never outside of Scripture have I had such a satisfying read. All the pain and pathos of Tim's childhood is overwhelmed in a wave-wash of God's grace and love, well blended with laugh out loud humor. Don't miss this one!
Read more
9 people found this helpful
Helpful
Report abuse

SureShopper
5.0 out of 5 stars A BEAUTIFUL CHRISTIAN FICTIAN SERIES FOR EVERYONE.
Reviewed in the United States on November 19, 2019
Verified Purchase
This Chrisstian series is well written, soft, warm, funny, with some hard spots as in real life. It is not preachy yet delivers the message LOVE YOUR NEIGHBOR, DO UNTO OTHERS AS YOU WOULD HAVE THEM DO TO YOU... I have read it more than once and continually share it with friends and neighbors. Jan Karon writes beautifully and keeps the readers attention. I could hardly wait for the next book... I pray she will continue this series with the next generation... It contains NO foul language to turn you off.
Read more
One person found this helpful
Helpful
Report abuse

Purplekat
5.0 out of 5 stars Best yet
Reviewed in the United States on June 27, 2019
Verified Purchase
The emotions is this book are so real I could feel them. The story takes turns I only slightly expected. Be awakened with love and emotion in simple ways as you read this book.
Read more
4 people found this helpful
Helpful
Report abuse

Patricia Labrie
5.0 out of 5 stars Loving this series.
Reviewed in the United States on December 11, 2019
Verified Purchase
I purchased The Mitford Series for my mother. She loves them and so do I. I haven't finished all the books yet because my mom is reading them first. But, we have both been going them pretty quickly just because they are written so well and we love all the characters in all the books. Would, and have, recommend them to anyone that loves stories of small town living. Lots of fun to read.
Read more
Helpful
Report abuse
See all reviews

Dr Janet
5.0 out of 5 stars Like a homecoming for the reader
Reviewed in the United Kingdom on February 10, 2013
Verified Purchase
I's been several years since I read the last in the Mitford series, and I'd been saving this book as a treat for just the right moment. That moment came, and as I began "Home to Holly Springs", I wondered if I'd recall the characters and events of Mitford. What a delight to discover that reading this book was just like returning to my hometown: I immediatelty fell into step with each of the character's lives and also relished the new characters brought into this world. From start to finish, I loved each page of this book, and finished it with a smile. I know I can always come home to this wonderful group of people and to Jan Karon's crisp writing. Go on: treat yourself!
Read more
One person found this helpful
Report abuse

BusyG
4.0 out of 5 stars The Mitford Prequel
Reviewed in the United Kingdom on March 2, 2015
Verified Purchase
This gives a large amount of the back story for Father Tim and was published after the Mitford series. I read the Mitford novels first and I'm not sure if knowing the full back story would have taken something from them, so you may want to read Mitford first. I also felt this book was rather packed trying to tie up all the references to Tim's past from the Mitford series and it would almost have benefited from being spread over two or three books.
Read more
One person found this helpful
Report abuse

Amazon Customer
5.0 out of 5 stars I love this series
Reviewed in the United Kingdom on February 8, 2014
Verified Purchase
I justlvoe the Mitford series of books by Jan Karon. They are just simple tales of small town folk but engaging and edifying and a joy to read.
Read more
Report abuse

R. Nash
5.0 out of 5 stars Five Stars
Reviewed in the United Kingdom on August 25, 2016
Verified Purchase
Item as described and arrived promptly. This was a present for a friend. I am sure she likes it.
Read more
Report abuse

Sue McClymont
5.0 out of 5 stars Five Stars
Reviewed in the United Kingdom on October 2, 2014
Verified Purchase
Wonderful
Read more
Report abuse
See all reviews
Back to top
Get to Know Us
Make Money with Us
Amazon Payment Products
Let Us Help You
EnglishChoose a language for shopping. United StatesChoose a country/region for shopping.
© 1996-2021, Amazon.com, Inc. or its affiliates