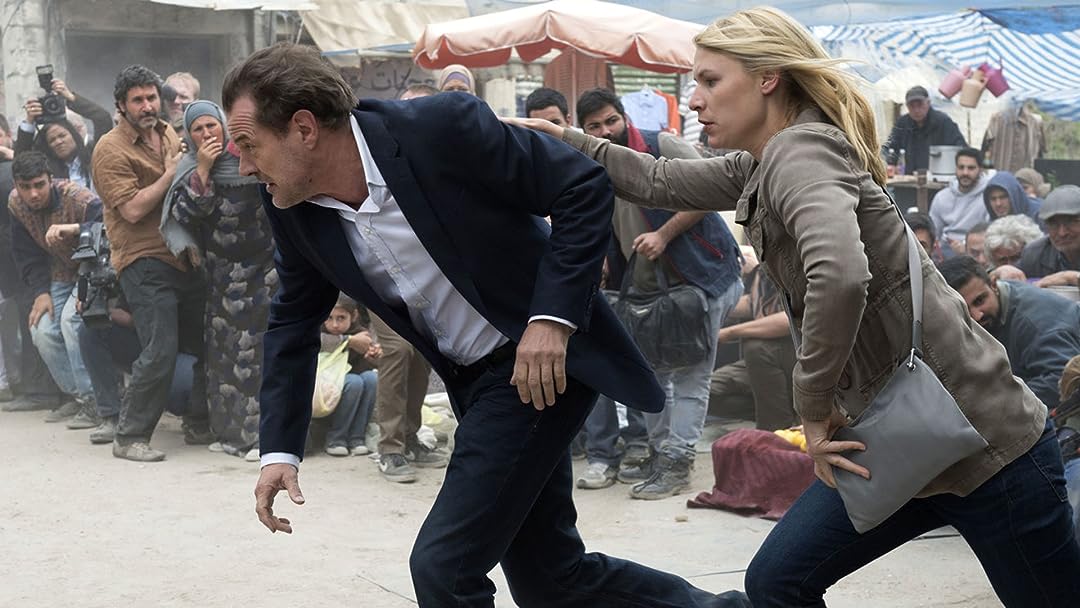 (1,905)
8.32015X-RayTV-MA
Out of the CIA and living in Berlin, Carrie is trying to start a new life but realizes now she's the one with a target on her back. One thing quickly becomes clear – she's never been at greater risk or with more to lose.

Jack E. LevicReviewed in the United States on January 25, 2017
5.0 out of 5 stars
TRUST NO ONE. A NEW LOCATION AND A GREAT CAST
Verified purchase
I just can't seem to get enough of lovely and talented Claire Danes as Carrie Mathison. This season former CIA agent Mathison is working for a private security firm in Berlin, Germany. Although she is happily living with her daughter and coworker boyfriend, she can't escape her past. Her peaceful life is soon shattered as terrorists plan an attack on Berlin.

Season 5 is typical "HOMELAND" but with a couple of twists. Carrie no longer works for the CIA and the show is actually filmed on location in Berlin. It's nice to see Berlin and to see some good German actors in strong roles. Needless to say, nothing is ever as it seems and don't trust anyone. Carrie becomes a "marked" woman and must go undercover to save her life and the lives of thousands.

Homeland is stylistic, well-acted and spell-binding if often contrived. It's hard to imagine an ex-CIA agent having access to CIA files and staff as Carrie does. Yet, we can dispend belief and go with the flow. Danes is fantastic as always and returns to new heights of acting when she goes off her "bipolar" medication. For some reason bipolar Carrie can think and rationalize better a terrorist plot than a medicated Carrie.

As always, HOMELAND's force is the fantastic ensemble of actors. It's also the new players each season who are incredibly talented as the terrorists bent on destruction and the couple who always have a conscience and want to do the right thing. I'd like to see these actors again in starring roles. I was especially mesmerized by Ercan Durmaz as Faisal Marwan. The fear and terror in his eyes rocked me to the core. Again, there are some seriously great actors in guest roles on Homeland.

Season 5 can seem a bit slow. The plot and subplots and list of characters and sorting out the good from the bad can be overwhelming but that is HOMELAND. Season 5 has been spiced up a bit. The location and pace has changed but again, we're dealing with Islamic terrorists along with the Russians and the usual CIA traitors. Carrie has to thwart another terrorist attack and hackers have unintentionally gained access to top secret CIA files that could harm the German government It seems routine at times but somehow it keeps working. Miranda Otto is delightfully deceitful and evil and the head of the CIA office in Berlin. It's the cast that makes this show so incredibly addicting.

Typhoon Jenkins IIIReviewed in the United States on December 25, 2016
5.0 out of 5 stars
Love it
Verified purchase
Have you ever seen any actor play her role better than this lady? My goodness, she plays a role like I've never seen. Great series. If I ever see her on the street in real life, I'm crossing over to get out of her way. LOL She's so talented and scary at the same time.. The whole series is just amazing.
28 people found this helpful

Georgette RuthReviewed in the United States on April 30, 2017
2.0 out of 5 stars
Why is this amazing show going downhill?
Verified purchase
Homeland Season 1-3 was amazing, Season 4 was acceptable, but Season 5 seems to have been created from stereotypes and seriously lacks new, interesting or compelling characters. Carrie's boyfriend is dull and boring, her coworkers are just as flat. The plot lines are not that believable and...also not that interesting and I'm not driven to care about anyone involved. In previous seasons Carrie's depiction of a person with psych problems and manic disorder was great and very relatable, but in this season the episode to go off her meds and her portrayed "behavior" was stereotypical and so juvenile I was embarrassed to watch it. Nothing seems natural and organic here, it's forced and kitschy. Hope season 6 is not as bad.
13 people found this helpful

Colonel DReviewed in the United States on September 11, 2017
4.0 out of 5 stars
Homeland serves up another engrossing season of suspense
Verified purchase
If you take a moment and think about it the evolution of “Homeland” is quite remarkable. Once the founding story line following former POW Nicholas Brody wrapped up in Season 3 it seemed doubtful “Homeland” could sustain the same level of suspense and intrigue going forward. Season 4 and now Season 5 have proven that the series can and does deliver the same level of compelling drama. 4.5 stars for this season.

We find Carrie Mathison no longer in the employ of the CIA working as head of security for an NGO type of outfit called the During Foundation and living in Berlin. She’s on her meds (thankfully as she’s bipolar and when she’s off them the show suffers for it) has a hunky boyfriend (who looks a lot like Brody) and her young daughter Frannie all living happily together. Carrie’s boss wants to travel to the Mideast as part of his foundations charitable efforts in the region; however the area’s unstable and Carrie has to scramble to try and ensure his safety. Things quickly go south and Carrie’s quick thinking avoids an IED attack and starts her down a path bringing her back in contact with the Agency and old colleagues Saul Berenson and Peter Quinn. The situation swiftly develops involving a classified document data breach, a Russian mole in the CIA Berlin Station, a terrorist plot employing a WMD weapon in Berlin, and Carrie betrayed and being targeted for assassination by parties unknown. Without giving away any details each episode builds the suspense to a thrilling climax where catastrophe is only narrowly averted.

Sure, there are a few details that will tax your belief. At one point Carrie’s on the run and trying to lay low so she needs a disguise. Taking a cue from “The Americans” she dons a brunette wig (a German colleague tells her it’s “retro” and makes her look like she was in the Bader-Meinhoff gang which is semi-amusing if you were stationed in Germany in the 70’s) and that’s it, no glasses, hat or change of clothes. You’d think a former agent with her experience could come up with something more effective than a bad wig. In a later episode a critical suspect is left by Saul in a German intelligence office that’s windows apparently don’t lock and he jumps to his death…really? Also Carrie’s no-longer a federal agent without any official status but she’s running around with a semi-automatic handgun which seems very unlikely.

All said and done “Homeland” Season 5 is a thrill-packed story that keeps you entertained from start to finish. I’m looking forward to the Season 6 DVD release and where Carrie & Company goes next.
6 people found this helpful

WBReviewed in the United States on July 28, 2017
3.0 out of 5 stars
Not as good as seasons 1-4.
Verified purchase
I found season 5 to be quite a drop off from seasons 1-4. For starters it starts off 2 years into the future where Carrie has left the CIA to work for a foundation that helps people in war zones? Not totally clear on why the writers came up with this plot line.....she now has a kid (Brody's) and a new boyfriend who also works at the foundation and he his clueless about her bipolar disorder......which Carrie explains to him.......oh yeah, right after she goes off her meds. Carrie, you have to stay on those meds! But the sex is good! ;-) Well, you can take the girl out of the CIA, but you can't take the CIA out of the girl, which leads Carrie into many danger situations again. Alice ann, (a new CIA character) steals the show with her double agent, double dealing, back stabbing, conniving, sleeping with Saul, having people killed for her Russian handler. But she gets hers in the end. Like I said, not as good as the first 4 seasons but it did hold my interest. I suppose in season six they'll jump ahead 25 years and Carrie will be mentoring her daughter in the rich fulfilling life of being a CIA agent. Come on writers, come up with a little more realistic plot for season 6 will you?
3 people found this helpful

C. HixsonReviewed in the United States on October 4, 2016
5.0 out of 5 stars
Homeland's 5th season is as good or better than the prior four
Verified purchase
Homeland's 5th season is as good or better than the prior four. The protagonists,
Carrie, Peter Quinn and Saul begin to realize you can't walk away from this war of the modern age
where computers remember your every act, and the internet makes even the secret CIA agent
an open book to the enemy. Did we create the enemy we cannot walk away from? Generally the consensus
of the story line is Yes. The humane Muslim doctor treats the wounds of strangers, while the Jihadi
plots to kill without compunction. Carries seems to search for a connection in Catholicism to assuage her
suppressed guilt for the collateral damage from her Season Four drone strike. America is an ocean away
from the hot war fought in the skies and villages by contract mercenaries and special forces strike teams.
Both Israel and Russia have strategic policy objectives being carried out by sandals and boots on the ground.
Claire Danes is a huge talent and supported by a solid cast down to the extras. Five stars well earned.
24 people found this helpful

King MongkutReviewed in the United States on April 14, 2017
5.0 out of 5 stars
Fantastic Thrilling, and Captures the complexities of fighting terrorism
Verified purchase
This series does such an amazing job capturing the complexities of the global war on terror. You get a pretty accurate characterization of the geo-political games that are played from the perspective of the various parties - jihadists to muslims who are moderate and of course the games within the US intelligence agencies and officers. Claire Danes is flawless as the flawed heroine heading a cast of unforgettably complex characters facing impossible choices every time. Yes, it can be overly dramatic most of the time, but they nail it in terms of the reality of the post-9/11 world. Highly recommend.
2 people found this helpful