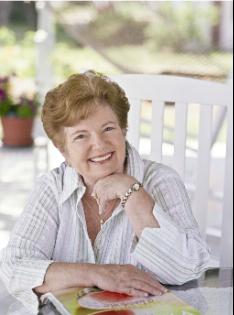 by sherryl-woods (Author)
4.7 out of 5 stars 2,056 ratings
Book 7 of 11: The Sweet Magnolias
See all formats and editions
Sorry, there was a problem loading this page. Try again.

"Chalk" by Bill Thomson for $7.99
Three children discover a magical bag of chalk on a rainy day. | Learn more

With her roots firmly planted in the South, Sherryl Woods has written many of her more than 100 books in that distinctive setting, whether her home state of Virginia, her adopted state, Florida, or her much-adored South Carolina. She's also especially partial to small towns wherever they may be. In Amazing Gracie, as in her later Trinity Harbor series, Woods creates a fictional version of the town where she spends summers on the shores of the Potomac River. "This town just lends itself to fascinating characters and a charming locale," she says.

A member of Novelists Inc., Sisters in Crime and Romance Writers of America, Sherryl divides her time between her childhood summer home overlooking the Potomac River in Colonial Beach, Virginia, and her oceanfront home with its lighthouse view, in Key Biscayne, Florida. "Wherever I am, if there's no water in sight, I get a little antsy," she says.

Sherryl also loves hearing from readers. You can join her at her blog, www.justbetweenfriendsblog.com, visit her Web site at www.sherrylwoods.com or contact her directly at Sherryl703@gmail.com.

Amazon Customer
1.0 out of 5 stars BEWARE UNREADABLE
Reviewed in the United States on March 15, 2021
My book is also all out of order. It's not even remotely readable. There's no chapter one. The whole story is out of order.. Unfortunately, didn't find this out until it was too late to return or exchange it. I'm stuck with a book that is all sorts of jacked up. Never seen anything like this before.. ever.
Images in this review

Theresa Hayes
5.0 out of 5 stars A Page Turner
Reviewed in the United States 🇺🇸 on January 2, 2023
Verified Purchase
I fell in love with this series from the show, but the books are even better. I'm on to book, number 8
Read more
Helpful
Report abuse

P. Blevins
5.0 out of 5 stars good fun reading
Reviewed in the United States 🇺🇸 on September 2, 2020
Verified Purchase
Honeysuckle Summer: A Sweet Magnolias Novel, Book 7 is by Sherryl Woods. This book is about Raylene. Raylene had come home to Serenity to get away from her abusive husband before he killed her. Her Mother wouldn’t give her any help; but her childhood friends did. Sarah took her into her home and she helped take care of her children. Raylene had agoraphobia and couldn’t go outside so the nanny took them outside and to the park. It worked for all of them.
One day while the children were outside, Raylene turned around to get them some lemonade and cookies. In seconds, Tommy was gone and Raylene couldn’t hunt for him. She called Sarah and the police and was frozen to the porch. As the many volunteers looked for Tommy. The newest officer, Carter Rollins, found Tommy and brought him home. He was fast in blaming Raylene in not getting out to find him. However, he said little and then went home to his two sisters.
Raylene got the message from him and wanted to move out so she couldn’t harm Tommy or Libby; but Sarah and Travis wouldn’t let her. She wasn’t leaving until she could leave on her own. Until then, that’s what friends were for. Later that evening, Travis was able to talk to Carter and tell him about Raylene’s agoraphobia so Carter felt he needed to help her if she would let him. In return, she could help him with his two teenage sisters. Was it a fair trade?

Kel Sheckler
3.0 out of 5 stars Good story line
Reviewed in the United States 🇺🇸 on October 17, 2022
Verified Purchase
I did enjoy the story of this book, being aboe to dive into the life of Raylene. It ties in nicely with the other books. These books do take awhile to get to the suspense, or the climax..but well written and kept me reading! I'll be reading the next one in the series!
Read more
Helpful
Report abuse

Robin O. Harris
4.0 out of 5 stars Wonderful Book!
Reviewed in the United States 🇺🇸 on June 6, 2016
Verified Purchase
Ok, I confess; I am addicted! Sherryl Woods created such great characters for her Sweet Magnolia series that as son as I finish one volume, I rush to read the next. There are still some organizational challenges for me as a reader: her jumps from one character and issue in one paragraph to another character and issue in another is always disconcerting. However, woods' strength comes from the broad sweep of characters with whom she people's the town of Serenity. With overlapping stories, and for the most part, their continued presence in subsequent volumes, the main characters, the two generations of Sweet Magnolias, and other peripheral characters, Woods really facilitates the readers' connection to, and identification with the residents of Serenity. Her books are similar to soap operas which allow such intimacy with the characters that you cannot give up the fascination with what is going to happen next and to whom. This volume is particularly satisfying as there is adequate closure for all the main characters as well as much-needed references to answer questions about previously featured characters. I do recommend this series although I give fair warning that you will get hooked, just as I am!
Read more
One person found this helpful
Helpful
Report abuse

J. Peters
5.0 out of 5 stars Captivating Until the Last Page
Reviewed in the United States 🇺🇸 on February 21, 2022
Verified Purchase
A wonderful story that draws you in from the first page and holds your interest until the very last page!
Read more
Helpful
Report abuse
See all reviews

Kindle Customer
5.0 out of 5 stars Wonderful series
Reviewed in the United Kingdom 🇬🇧 on April 5, 2015
Verified Purchase
I'm sorry to get to the end of this series. I haven't traditionally been a fan of romances, but the Sweet Magnolia books are more than that. As well as friendships and community, these books tackle all kinds of real life problems, such as controlling and abusive relationships, confidence and ambition. Plus they're fun with entertaining dialogue and a gorgeous setting. Yay for Sherryl Woods.
Read more
Report abuse

pauline collins
5.0 out of 5 stars great read
Reviewed in the United Kingdom 🇬🇧 on March 30, 2013
Verified Purchase
As I have said before the seet magnolias novels are ace. I hope that there will be more to come, and I can continue to read about their exploits.
Read more
Report abuse