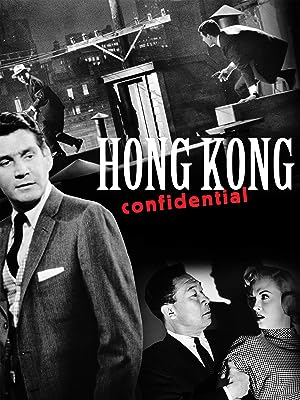 (18)
1 h 8 min19587+
A secret agent is tasked with the important mission of rescuing the prince of a small Arabian nation who has been captured by Soviet spies in Hong Kong. He follows clues that lead him to the kidnappers, who plan on framing him for their entire plot.

Watch with ScreenPix
Start your 7-day free trial
Add to
Watchlist
Redeem a gift card or promotion code
By ordering or viewing, you agree to our Terms. Sold by Amazon.com Services LLC.
Write review

Andy McKinneyReviewed in the United States on November 7, 2020
2.0 out of 5 stars
spy flick
Verified purchase
To see a movie like this makes us glad to have the modern cinema. I have Amazon Prime Video and am taking advantage of it with a vengeance.
Director Edward L. Cahn has some 127 directorial credits across a span from 1931 to 1962. This 1958 film noir spy offering came near the end of his career. He learned a lot about making movies quickly and cheaply but not much about making good ones.
Gene Berry plays an early version of the modern spy heroes like James Bond. He has quips. He is unflappable under dire situations. There are pretty girls. If this sounds a bit like Bond to you, you would have it right. But the fights are ludicrous, even the gunfights. The actors simply push the pistols, all revolvers by the way, in the general direction of the enemy and let fly. Never did a single shot cut lose after aiming.
There is no sexual energy between Berry, the spy, and Allison Hayes, his love interest. Zip, nothing. Hayes also played in "The Attack of the 50 Foot Woman." Beverly Tyler plays the bad girl.
The setup, the plot, is stupid and unconvincing. The sets of Hong Kong and Macao are obviously just that, sets. We get a voice over to explain stuff that happens off-screen, which is lame.
All in all, this is a not very good B reel movie. I like movies and watching this helps me to understand what makes a good one and what makes a bad one.
Thanks to Amazon Prime Video for having this moldy oldie for me to watch.

Damien HunterReviewed in the United States on September 18, 2021
2.0 out of 5 stars
Cheesy and Simplistic
Verified purchase
This is a TV movie from the 1950's that likely aired on a program like General Electric Theatre....Gene Barry (who I genuinely like) puts in a cheesy performance as a nightclub performer who is secretly an American agent sent into Hong Kong to rescue an Arab prince who's been kidnapped by the Commies. Barry's no singer, leave it at that. The plot never bothers to reveal what the young prince (who is obviously an American teen in Arab head dress and robes) was doing traipsing around in the Far East in the first place, but who cares. Barry has a predictable, long-suffering love interest (a piano-playing blonde nightingale who accompanies his nightclub performances) who is convinced his disappearances have more to do with other women than any work he might be doing for the government. Flat performances overall that were clearly given during the Red Scare of the Fifties...save your money for a real spy movie.

Rick LaneReviewed in the United States on April 19, 2013
5.0 out of 5 stars
Hong Kong Confidential
Verified purchase
This is a good Drama/Thriller starring Gene Barry, Beverly Tyler, Noel Drayton, Allison Hayes, Michael Pate, plus others! This movie is presented in Full screen format, B&W and runs for about 68mins (1hr 8mins). This is about Secret agent Casey Reed (Gene Barry) is assigned to locate a missing Arab prince kidnapped by Communists. MGM did a good job on transferring this to DVD and there isn't any special features. Overall this is a good movie and I would recommend this.
8 people found this helpful

brutus sanchezReviewed in the United States on April 12, 2015
1.0 out of 5 stars
A Lot like a Saturday Afternoon Western
Verified purchase
Embarrassingly bad acting, absurd story, predictable, little tension, cheap locations. Did someone really throw an empty gun at our hero, hoping to stop the pursuit of justice? Not at all what I was expecting when I saw the 4 star rating. Why weren't all the prints of this movie turned over to the Chinese in 1997? The film world would have been better off.

mystery loverReviewed in the United States on April 22, 2016
5.0 out of 5 stars
Enjoyable old movie!
Verified purchase
Maybe I should have given this 4 stars but i really enjoyed it very much. I will be watching this again.
One person found this helpful

slowroll323Reviewed in the United States on January 25, 2017
1.0 out of 5 stars
Help! It Stinks.
Verified purchase
This film is so corny that I gave up on it after 15-20 minutes. It was a real stinker!

JakeReviewed in the United States on June 20, 2018
5.0 out of 5 stars
Five Stars
Verified purchase
I enjoyed this movie.

jskReviewed in the United States on September 23, 2014
2.0 out of 5 stars
Two Stars
Verified purchase
Just too cheap and set-bound to really enjoy. But Gene Barry completists will like it.
See all reviews
Back to top
Get to Know Us
Make Money with Us
Amazon Payment Products
Let Us Help You
EnglishChoose a language for shopping. United StatesChoose a country/region for shopping.
© 1996-2022, Amazon.com, Inc. or its affiliates